Since I wrote a review for Wolverine and the X-Men #1 it is only fair, I give Uncanny X-Men #1 the same shot and review it as well. Cyclops and the team of X-Men that have chosen to stay on Utopia are looking to remain strong in the wake of the Schism. It will be a difficult challenge but one that the X-Men have to face.

Throughout Schism, I found myself siding more with Wolverine over Cyclops. Because of this, I was not sure how likely I would be to pick up Uncanny. However, Gillen was continuing and I liked the look of the previews. One of the biggest reasons I wanted to pick up at least issue 1 was this quote from Storm in X-Men Regenesis: “I know what you’re planning. You do not need me, Scott. You need my power.” It made me interested in what was to come. I wasn’t entirely thrilled when I first heard that Uncanny X-Men was going to be renumbered but there was enough there for me to get over it and pick it up. 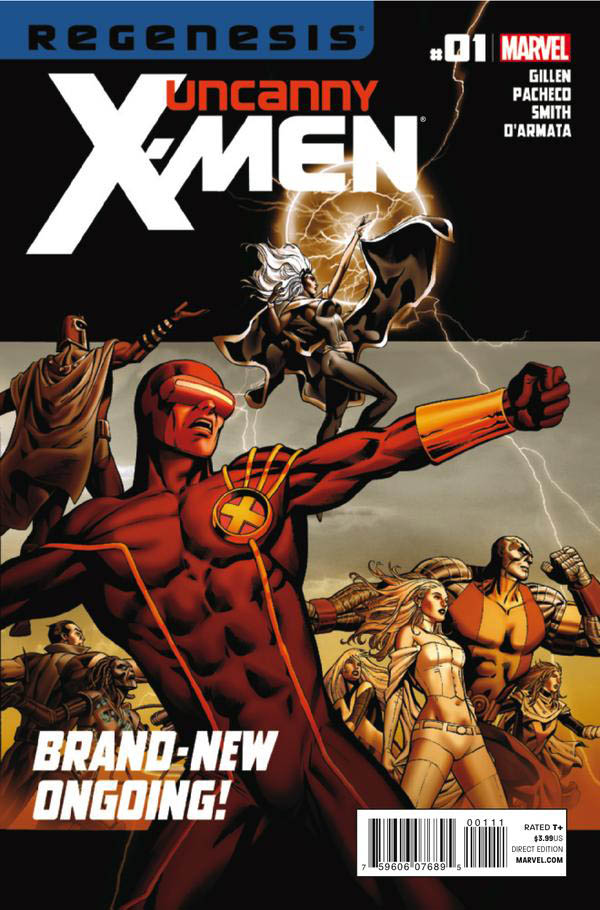 The team that Cyclops is left with on Utopia with is definitely an odd assembly for a “super hero” team. It was brought up in Regenesis as well as in this issue that many of these individuals have not always been the most heroic. This is sure to cause somewhat of an image problem for the X-Men. However, Cyclops has a plan and this may work out just how he wants. You have to think though how interesting would it really be if everything just fell into place for the X-Men.

Cyclops and his X-Men are still trying to deal with the same issue they have always faced, mutant prejudice. Cyclops’ plan? Create a team with the equivalence of the Avenges to protect humans and mutants alike. Although Scott has another plan for this team of his. He wants to incite a level fear in the people they protect. This approach made me think of this team as a military of sorts.

Gillen starts the issue by giving an introduction to the world of the X-Men that you would expect to see in a #1. He gives the setting for the X-universe but also manages to add to the story that is about to come. Although there are many characters that need to be introduced in this issue, Gillen manages to do a good job without getting too involved with any one character. By doing this, he allowed the script to have a good amount of action which I was expecting from a first issue. As for the art, I enjoyed it. There was good detail which gave the characters more depth. The only criticism I have with this issue is that it appears as though in one panel Emma is using her telepathy while in her diamond form.

Overall this issue was a good, thought-provoking read and I will be picking up issue 2. Uncanny X-Men has had such a long run that trying to start over would be a difficult task. Luckily, I do not think that is the direction this series is going. This should not be seen as a re-launch but instead as a new chapter in the Uncanny story.

Review – Wolverine and the X-Men #1 Schism has ended and the teams have been chosen. Wolverine and his team of X-Men have left Utopia and traveled…

Comics for Noobs: February 14th Valentine's Day is this week and there is only one gift that truly shows how much you love someone: comics!…