So maybe you were raised by gorillas in the jungle or are a prisoner serving a life sentence in solitary confinement. In that case, you are forgiven for not knowing about the comic industry’s biggest kaffufle since the Death of Superman or arguably since Spider-Man signed a contract with the devil to erase his marriage*. The rest of you know that DC has effectively squashed the competition in the PR game with it’s announcement that they are rebooting their entire line of comic books to #1 in September†. In the fall, all DC books are effectively canceled and 52 new books will be released to take their place‡.

So the other day while hanging out with friends, Clint the fedora wearing Beatles nerd – and peripheral comics fan – among us overhears a conversation I’m having with a DC geek about the New 52 and asks, not without a hefty measure of frustrated derision: “Why should I be excited about the New 52 anyway?” My reaction is paralysis. His question struck me as simultaneously outrageous and valid. As if he were asking me if God exists. Regardless of your position on the issue of God you are probably convinced of the insurmountable evidence to support your belief. But the question is very reasonable. And to annoyingly draw the parallel further, the subject of the New 52 does indeed seem divided into two camps. Those excited and those squarely against it. Though I’m sure some people are probably moderate in their approach to the subject of the DCnU. Those people probably live in a solar powered cabin and have never gone near the internet (good for you hermit person! Down with the man!). The rest of us are conniption fitting and crapping our pants because Wonder Woman isn’t wearing any.

Let me attempt to answer in a blog article on the internet, a question my friend Clint asked me to my face. Here are 5 reasons I think Clint should be excited about the New 52.

#5: Number five is #1. Yes, I mean the issue number on the book. Long time fans are so accustomed to renumbering that a new #1 from Marvel and DC has come to mean very little. But in this case, it’s different. DC is very serious about this initiative. In fact, Action Comics and Detective Comics, the longest running titles at DC are very close to hitting issue #1000. This would be a marketing opportunity in itself. When DC announced a renumbering, fans assumed these two comic titans would be immune. Nope. DC is going all-in with this. They want to start fresh and they mean it. It’s not that the number on the cover of coming books really matters, it’s that the decision to completely renumber across the board has meaning because of it’s wide reach into all the titles. It is indicative of an attitude of commitment to the relaunch. 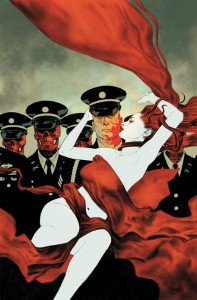 #4: Increased genre diversity: With this relaunch one can detect a corporate willingness to find an audience for genre books. You like westerns? There’s some of that. Horror? You got it. War stories? That too. Or maybe you’ve been yearning for a black ops super-villain team book – with a shark man. Tada! And so on. There is a likelihood some of the lesser known properties will get canceled due to poor sales but I won’t let that stop me from enjoying some of these books while they exist. And who knows if one or three of them will take off and become a hit, paving the way for more of these types of books.

#3: Re-jigged continuity. Ew! Continuity. What a dirty word. When the comics audience is ever dwindling, continuity can play a role in accelerating the reader attrition. But in the fall, DC is going back to it’s main characters’ roots, telling stories from earlier in their career. I don’t know about you but I like origin stories. And even in the titles where the origin is not retold but rather the stories take place at a younger place in the superheros’ lives, this is likely to free up writers creatively to tell tales of heros still trying to find their place in the world. I like when characters aren’t so experienced that they should easily defeat villains. I mean, how many times has Batman fought Scarecrow. He should be used to it by now. In the fall, much of that changes. The possibilities open up for the introduction of new villains that we’ve never heard of and new interaction between DCU characters. I look forward to re-discovering a younger DCU. When it comes to superhero comics, a continuity facelift can often be a good thing.

#2: Digital at a reduced price. A comic is $3. That’s a decent price considering a song on itunes costs $1 and lasts three minutes and a comic book takes 10-20 minutes to read. But still, money doesn’t magically appear in the microwave. For your hard earned buck, DC will sell you more comics in the fall. If you like to read on your iPad or laptop, you can get all the comic books at a 33% discount online if you wait to read them a month after their initial release. That’s pretty good for a Geek On A Budget. And you don’t even have to leave your home to get them!

#1: Accessibilty. The whole idea with this all-or-nothing move, is that DC – and comics in general – have an audience which is getting older and decreasing at an alarming rate. If you believe the sales numbers, the current readers are gradually quitting comics. So the marketing push at DC is to get new readers. That is the mandate. So Clint, these books are written not with current fans in mind, but they are written for YOU! The guy who doesn’t buy much comics and is not sure exactly where to jump in the DCU. THIS is the place to get in on the action!

I don’t know if I’ve convinced you of my beliefs on God, uhm I mean of my opinion about the New DCU, Clint. But in September there will be a place you’ll know to find me. At the Comic Book Shop. I hope to see you there.

Remember to come back here in September to read reviews of many of these 52 new books. And if you would like to tell Clint why you are excited or repulsed by DC’s New 52, leave a comment below.

* This contract of course has many clauses and lots of convoluted fine print, what with being written up by the devil and all. And by devil obviously, I mean Joe Quesada. Or maybe J. Michael Straczinski. Let’s go with both. It’s the internet, there’s plenty of blame to go around.

Geek On A Budget: Special Edition (UPDATED) We interrupt your regular programming for a news bulletin! DC has announced that they will be releasing their comics on…

Are You Positive? We all like reading comics here, right? We really enjoy running to our local comic shop every Wednesday and picking…

Editorial – Comic Book Events Burnout Let me start off by saying that I love comic book events. There is nothing like the excitement and potential…