A Piggy’s Tale is the story of a three-legged dog named Piggy… who just happens to be a super hero.  Together with Simon (a crime-fighting cat) and Melanie (their human companion who can speak to animals), Piggy strives to help other animals and beings in need.  He shows compassion not only to those he rescues, 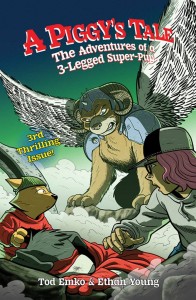 but also toward those from whom he is doing the rescuing.  No vigilante justice for Piggy – he knows that something happened to those bad guys to make them that way.  He would rather show kindness, and root for a change in heart.

This issue finds Piggy helping a distressed baby whale who has been separated from its mother.  Thanks to some help from Piggy’s environmentally-conscious and animal-loving owners, the momma whale is rescued in the knick of time from some cold-hearted whalers.  Our canine hero returns home, only to hear about dogs who are being forced to fight each other.  He rushes to the rescue, but Melanie and Simon fear that this could be a trap set up by their nemesis, Dr. Huntington.  Piggy acknowledges that it very well could be Huntington’s doing, but if there is even a chance other doggies are in danger, he must go.

Writer Tod Emko rescued the real-life Piggy and welcomed him, along with rescue kitty Simon, into his home.  His passion (and compassion) for animals shines through his work.   Ethan Young’s artwork is perfectly matched to the story.   The endearing heroes and characters are complimented by his bright and colorful illustrations.  Piggy’s comic book focuses on empathy and team work, and makes for a great all-ages story with heart and a message.  It’s not too intense or scary for younger fans, but still lets them realize the need to be kind to animals (and their fellow humans, too).  To paraphrase Dr. Seuss, “A creature’s a creature, no matter how big or small!”

You can pick up issue #3 at your local comic shop on October 8th or order directly from the Piggy store!

A Piggy’s Tale #1 in Stores April 16th! A few months back, I covered a Kickstarter looking to fund the first few issues of a four issue series.…

Crowd Funding Flash: A Piggy’s Tale Grab your wallets and get ready to invest in the cuddliest comic you can shake your crowd funding dollar at!…

It’s All in the Trades: We3 Have you ever finished a book, and couldn't decide how you felt about it?  The book itself wasn't confusing -…