I love the old Hollywood monsters. I can remember back when I was a kid, sitting in my uncle’s living room, waiting for the gigantic satellite in his back yard to turn (anyone else remember those?) so we could watch the monster movie marathons during Halloween. It was there that I was exposed to the likes of Dracula, Frankenstein’s monster, the Wolf Man, and the Mummy. I was so fascinated. We’ll get into more of that later. Right now, we need to focus on this, and by this, I mean, the next thing you’re going to be reading on your snazzy digital platform, or the hardcopy of this graphic novel! Everyone, take your places, we’re about to go right into the review of Baron Von Frankenstein: A Hollywood Tale. And… ACTION!

FADE IN: It’s an old movie theater, complete with drawn back curtains and plush seats. Everything that makes you remember just how awesome it is to see a movie. We’re watching a NGN Pictures Classic – The Baron vs. Dracula. In it, we have Igor, the Baron’s faithful servant, and Monster, Baron’s greatest creation, cornering the likes of Dracula, the greatest vampire to hit the silver screen. With twists and turns, Dracula gains control of our trusty duo, but not until the Baron makes his grand entrance! “Not so fast, Count!” the Baron shouts. “This is the end of you and your diabolical ways. I hope you like garlic on your pizza!” It’s intense action as the movie ends, with Dracula defeated, and our awesome trio saving the day once more. This is what is was like for the monsters. Not just Baron, his monster, Igor, and Dracula, but also the likes of Cyclops, Jekyll and Hyde, the Mummy, the Invisible Man, and Wolf-Man. They were on top. The classic movie we know and love, and many more were the works of these thespians, who are also part of the Monsters Union, of course. Things are different now. They just can’t seem to get regular acting gigs anymore. Most have taken on other jobs just to make ends meet, but it’s still not enough. They were stars!

At the latest meeting of the Monsters Union, the Baron has great news for these screen craving actors: A man by the name of David Sippiro has a job offer for them. Sign away all likenesses to him, and he’ll put them in commercials promoting all kinds of products! From hair care to cell phones, it all sounds great to the monsters, all but Baron that is. How dare Sippiro ask them to make fools of themselves! They are respected actors! A vote must be unanimous though, and Baron says no! All is not well and good between everyone, as later that day, while standing on the diving board to his pool, the Baron disappears. POOF!  FADE OUT…

Richard Rothstein is the creator of this nice little tale. His previous credits include writing the original screenplay for Universal Soldier ( 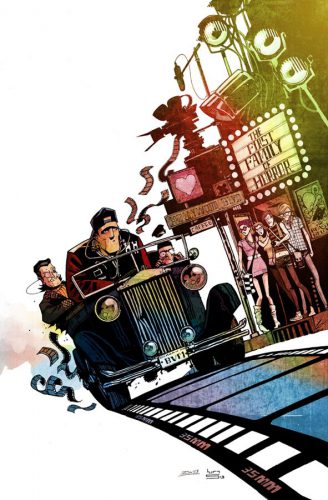 say what you want about it, it was an awesome action flick), and he also created, wrote, directed, and ran the HBO show The Hitchhiker, which was actually pretty awesome too. Richard has talent, there’s no doubt in that, but it would seem that it’s all action and horror. That may be true, but if this book shows anything, its just how diverse Rothstein can be. Here, we have a great story, with three significant acts. It’s based off his screenplay after all, and it flows quite nicely in that regard. Rothstein is able to take very iconic characters and make them his own, in a world that actually fits. It’s full of laughs, some tight action, and a fair amount of character establishment. As I read through this, I found myself really enjoying the likes of the Inspector, and the Magician in the retirement home. It’s classic, it’s silly, and most of all, it has a lot of heart. Not only is this something that I enjoyed very much, I know that my kids will love it too. That’s what helps to make a great comic, right there. Something that I can share with my kids – from two all the way to my 14 year old daughter – I’m sold.

With a story like this, you have to have artwork that matches. Keith Burns pencils are perfect. They have a dash of old style to them, with a definite freshness to it. His characters are very consistent throughout, and emotion is portrayed very well. It’s no small feat to maintain a consistency with stuff like this, and the way Burns does it is classic. From his depiction of the vile and evil Sippiro, to the old-English snobbiness of the Baron, to the classic looks of Frankenstein’s monster and Igor, nothing else could have worked. Keith’s pencils give off almost a rough sketchiness to it at times, while in other panels, things take on a very rounded shape. Again, diversity works really well here, and Keith’s style stays true. Monster is large and blocky lines, while Igor is rounded. Baron is very sharp, really giving off an image of royalty, while the likes of the Inspector or the Magician maintain the silliness of the visuals. It’s all so much, but so subtle in it’s display.

I really enjoyed reading this. Like I’ve said several times before, my brain always tells me to pass up on stuff I wouldn’t normally read. Today, I chose to completely ignore that and read something I’d never normally pick up, and like always, I was very pleased. I think a great part of the appeal was that it took me back to that time when I was a kid, watching those old monster movies with my uncle. After reading this, I can almost laugh now and think of those movies in a different light. When the scene is over, the monsters move over to the catered foods and wait for the next scene to be set up, shooting the breeze with the rest of the cast. I bet Wolf-Man would have been awesome to work with, but Dracula… I dunno. He may have been a little difficult. They give us some really great backstory as the comic moves on, and we get moments like this. I love it.

Baron Von Frankenstein will be available on Apple iBooks, Amazon’s Kindle, the Nook, and Kobo this coming Friday, the 26th, with a physical copy to follow. So, make sure to get yourself a copy, not only for you, but for the kids too! It’s something that not only you can enjoy, but also sit down with your kids and help them get into this wonderful world we love so much. Baron Von Frankenstein: A Hollywood Tale is smart, funny, and an all around great book! If you loved the classic monster movies, this is a great take on those characters. Richard Rothstein and Keith Burns do them justice, so you won’t be disappointed.

Parental Concern: Great for the kids, and for you too!

Review: Frankenstein Alive, Alive! #1 I have always been fascinated by the story of Frankenstein. From Mary Shelley's book to the countless movies, it's a…

Back Issue Bin to the Future: The Punisher (Vol.1) #1 Have you ever seen one of those covers that totally grabs your attention? The cover to Amazing Spider-Man #361 immediately…

SPOOKY Review: Afterlife with Archie #1 Zombies. Are. Everywhere. Think for a second and tell me if you can't recall some recent zombie something-or-other. We have…