Kurtis J. Wiebe and Riley Rossmo team up again to bring us a very different comic than their previous collaborations. Debris strikes a familiar note in that it’s set in a society struggling to survive in a post-apocalyptic world, but what makes it so different is the enemies in this world. Instead of the usual zombies or mutants or other humans, this tiny enclave of humanity must face off against angry Earth spirits known as the Colossals, which inhabit junk machinery and take on the form of animals. Standing between the Colossals and the end of the humans is Maya, a Protector-in-training, and her mentor Calista.

The book starts off with Calista and Maya hunting some Avios, Colossals which are something like a cross between a velociraptor and an ostrich. Their hunt is interrupted when Jormangund, a giant snake and Norse mythology reference, bursts forth and attacks the Avios. Jormangund is seemingly killed by Maya in the resulting fight. Once back at the settlement, Maya and Calista ask the elders to allow for more people to be trained to fight the Colossals and keep the village safe. Suddenly, Jormungand attacks the village and Calista dies in the battle, telling Maya with his final breath to find Athabasca, the mythical place where there is still water. As the issue ends, Maya sets off on her journey. 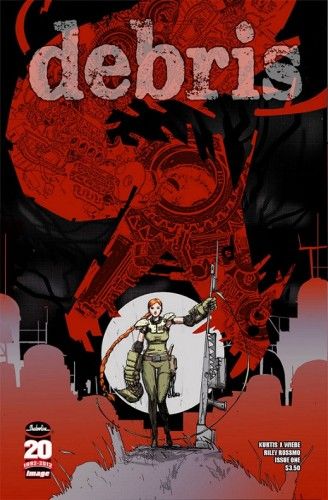 Kurtis Wiebe writes a fantastic first issue. You’re thrown into the middle of things, so you’re immediately invested. The dialogue so far seems well-written and appropriate for the conversations and mood. This first of four issues leaves a lot to still be answered, but I’m sure Maya’s journey will fit well into those four issues. Even though this issue felt short, you realize that a lot has happened. Maya has a purpose now, a reason to do what she does, and you’re given just enough exposition about the world around the village and the other non-human inhabitants that you want to know more. Wiebe draws you in well, and makes you need to read the next three issues so you know what happens to Maya on her way to Athabasca.

Riley Rossmo’s art is fantastic. His art is usually very moody and dark, but he does the bright, action-y art of Debris just as well. He certainly defied my expectations with this title, as I didn’t think he could pull it off as well as he did. Riley, I apologize. The characters are very expressive and the creatures are beautiful. The wires and things as sinews in the necks of the Avios are done so well. It’s this attention to detail that makes the artwork stand out. Rossmo’s art makes the world of Debris come alive, as great art should.

All in all, I loved this first issue. The story is given a nice setup, the writing is great, and the artwork works perfectly. Everything came together to make for a great read from two great creators. I, for one, am so glad Wiebe and Rossmo decided to collaborate again after Green Wake. They’ve filled the hole that was left after I discovered and quickly devoured the series a few months ago. This issue is most certainly worth a read, and is a great start to the miniseries. If my recommendation isn’t enough, there is a Norse mythology reference, which makes any comic worth a read.

Review: GoGetters #1 As part of MonkeyBrain’s seemingly constant quest to collect all the up-and-coming comic creators under their banner, yet another new…

Advance Review: Rebel Blood #1 When bad things happen, we all play scenarios out in our head. The mind vividly portrays every detail, no matter…

Advance Review: Rat Queens #4 A bit of a departure from writer Kurtis Wiebe’s somewhat more serious work, Rat Queens is a fantasy-comedy by Wiebe and co-creator/artist Roc Upchurch. The…