Well, this is it, after 3 years of stories, Irredeemable comes to a close. If you have not read any of Irredeemable up to this point, go read it now or you will be lost. Don’t worry, I’ll wait here while you get caught up. Read it? Good. I can’t believe such an epic series is ending. It’s been a wild ride since Mark Waid introduced us to the Plutonian, Qubit, Modeus, and the rest of the gang. And after 3 years and 37 issues, I can say that “Mark Waid is Not Evil! Mark Waid is Redeemable!”

So the issue picks up where the last one left off. Plutonian has realized that Qubit doesn’t intend to send him back in time in order to not commit the horrible atrocities he’s done since snapping. Plutonian is understandably angry, but Qubit manages to force him to hold up his end of the bargain by placing the only thing that can kill him, in his heart. Using the last of Bette’s gravity warping powers, Plutonian manages to scrub the Earth’s atmosphere clean of the radiation threatening to kill everyone. 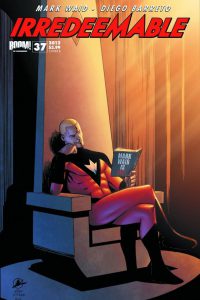 But, cleaning all that radiation out of the atmosphere allowed it to attack Plutonian’s body, and since it was radiation designed to contain his parents, it has critically wounded him. When Plutonian accuses Qubit of betraying him, Qubit retorts that he is giving his essence a chance to find redemption, if not his body. Qubit then opens portals to different worlds and dimensions to allow Plutonian’s essence to spread out and latch on to someone or something that can make the idea right. (I don’t want to give out the last reveal here, but if you want to know, scroll to the end.)

All I can say to Mark Waid is, “good one sir.” I have been blown away by the quality throughout Irredeemable and this issue is no different. Waid has been able to take archetypes and mold them into a great universe and story and for that I commend him. He also gets major points from me for the last panel, was not really expecting that.

Diego Barreto’s pencils really help convey everything in this issue. Facial expressions, something I am very critical of, were a strong point of his art here. You can see the anguish on Plutonian’s face after he gathers the radiation, and Qubit’s excitement when he realizes that Plutonian saved the planet. Those expressions really help sell the the action and plot.

All I can say is ‘wow.’ This has been a phenomenal series. I’m tempted to make this a rating of the series as a whole, since this is the last issue, but I’m gonna try and rate this one just on the merits contained within. As an ending to a series, this is as good as you could find. All the bases are covered, and for a tragic character like Plutonian, a chance at redemption is the perfect fit (for more information, scroll past the rating).

Stop reading if you don’t want the last panel spoiled.

Alright, you asked for it. Since Qubit sent Plutonian’s essence out to find redemption, it latched onto Siegel and Shuster. If you don’t know who that is, I’m not gonna explain further.

Back Issue Bin to the Future: Irredeemable Vol. 1 In honor of Irredeemable releasing it's 37th and final issue I wanted to review Volume 1 of the series for…