First of all, some of my best friends are gay.

Not really. If I look at those whom I consider my “best” friends, I’d have to admit the majority of them are heterosexual males and females of European descent (not that there’s anything wrong with being white and straight.) I have, however, worked in New York theatre for about 20 years. As stereotypes are indeed sometimes based in truth, this means I am and have been friends and colleagues with a disproportionate number of LGBTQ individuals, most of whom are wonderful, professional people, some of whom are amazing douchebags, all of whom are as unfortunately human as the rest of us.

And I’d be willing to bet American cash money that not one of them gives much of a damn that Alan Scott, the original-but-now-rebooted Green Lantern of DC’s new Earth 2 monthly comic, has been re-imagined as a gay man.

I mean, it’s just Alan Scott. It’s just Green Lantern. Big-time bad movie aside, Green Lantern is a firm B-Lister, at best. And again: it’s Alan Scott. He’s not even the most popular Green Lantern, who as we all clearly recognize is John Stewart (I don’t know about you, but when I mention Green Lantern to non-comics fans, the first point of reference for them is the black guy from the Justice League cartoon.) 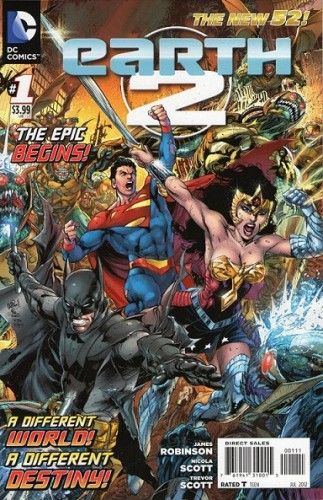 This was DC’s version of Secret Invasion, honestly. Marvel pumped us up for months with that one, promising us some hugely prominent Marvel heroes would be revealed to have been Skrulls since the seventies, or whenever. Who did we get? Dum-Dum Dugan? Elektra? Spider-Woman? I guess Hank Pym was the most high-profile of the Skrulls, and he’s just Ant-Man. C’mon! This teasing reveal of the gay character in DC continuity felt the same. It was announced that an established major character would be outed, and who did it end up being? The fifth most popular Green Lantern. Forgive me for being underwhelmed.

Look at this list: Northstar. Shatterstar. Rictor. Hulkling. Wiccan. Ultimate Colossus. Batwoman. Renee Montoya. Daken. Obsidian (who also happens to be the gay son of the Old 52’s Alan Scott, BAMF’d out of existence in the across-the-board DC retcon of just about a year ago.) These are just a few of the, frankly, fairly large list of LGBTQ characters in the DC and Marvel universes. Are all of these characters less important than Alan Scott? More important? Equally important? Who knows? Forgive me for thinking they all come across as C-List characters, characters that exist on the fringe. And as much as I applaud DC’s not-entirely-based-in-wanting-a-sales-bump move here, we are past the time where gay characters should be “on the fringe.” During Secret Invasion, I was hoping Marvel would have the nerve to make Wolverine a Skrull. Instead, I got Jarvis, the guy so unimportant he was replaced with a Star Trek computer voice in the Iron Man movies. After the hullabaloo surrounding DC’s “we have a pre-existing character we’ll soon reveal as gay” announcement, I was hoping it would be Damian Wayne. Instead, the big reveal was the sixth most popular Green Lantern. (I forgot about Kilowog. He rulez.)

Maybe it’s unfair for me to shake my head at DC for this. I don’t follow comic book press releases or conferences anywhere near as closely as many of my contemporaries here at StashMyComics do. Maybe DC’s big “reveal” was an offhanded comment at a Con panel, and the media heard “gay” and “superhero” and ran with it. To be honest, though, the Northstar wedding news was far more surprising and bewildering to me than was the Alan Scott news. Not because I think gay marriage is such a taboo subject, but because the last time I read a story featuring Northstar he was getting killed by Wolverine. It’s comics, though; characters coming back from the dead shouldn’t surprise me. (The X-Men even survived and eradicated their Legacy Virus, which is kind of unfair when you consider the disease the Legacy Virus really stood as a metaphor of has yet to be wiped clean from the planet.) 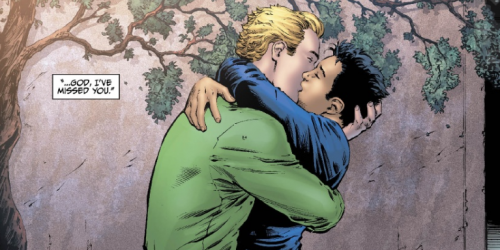 Hold on, though. I almost forgot to mention something very important, and maybe I should have opened with it: in no way do I put any of my disappointment on Earth 2 writer James Robinson, and the art team of Nicola Scott and Trevor Scott. (Related? No idea.) They have no responsibility for forwarding any sort of social agenda. Their only responsibility, as far as I’m concerned, is to produce a well-written and well-drawn entertaining monthly comic book, and if you haven’t yet read the first two issues of Ultimate Justice Socie— I mean, Earth 2, I highly recommend it; it’s a gorgeous book with a (so far) well-crafted story. In speaking to the mainstream media on the subject of a fictional comic book character’s made-up sexuality (sounds kinda silly when put that way, huh?) Robinson has made clear he wanted to keep the LGBTQ character element present in what is essentially the New 52 version of Justice Society of America, after the company-wide retcon eliminated Obsidian from the DC roster. So he decided he’d make the rebooted Alan Scott a gay man. Well, okay. Off we go. Frankly, as long as Alan Scott is written well, it doesn’t matter who he sleeps with. Robinson’s job is not to get the world to accept gay superheroes. His job is to write a good comic book, and so far so good.

So I’m not addressing Robinson and his fellow artists when I ask this question: when will we get a gay character in a book that we can’t ignore? Or in a book that doesn’t exist in an “alternate” universe? Is any character on the list a few paragraphs back a lynchpin in either DC or Marvel comics? Alan Scott exists in the extra-fake version of the DC Universe as the seventh most popular Green Lantern (Abin Sur is pretty dope). If Earth 2 gets canceled after 15 issues, what happens to him? Does he fade away into obscurity? This is why, again, I think DC missed an opportunity for a fascinating storytelling turn by not choosing to out Damian Wayne. Robin’s an A-Lister as a member of the Bat Family, and there’s been four or six or twelve of them, or something. What’s the difference if one of them is gay? And Damian’s personality and upbringing on a gay teenage boy doing the work he does as Robin? That would be amazing to read (or write.)

But I’m pipe-dreaming, I know. We’re just not there yet. This Alan Scott reveal does no wrong, sets no movement back, does nothing to hurt LGBTQ rights or causes. But it doesn’t do much to forward anything, either. We’ve seen a laundry list of B-List and C-List superheroes brought out of the closet. We need an A-Lister. That’s when I’d pay attention. That’s when I’d be impressed.

Because, you know, some of my best friends are gay.

Tom Hoefner (@TomHoefner on Twitter) is a playwright, theatre director, college professor, and would-be novelist living in Brooklyn with his wife and daughter. He also has a gay cousin who works for Google, which goes to prove they ARE trying to take over the world! (Gays. Not Google. BUT MAYBE ALSO GOOGLE!)