Jeffrey Brown is no stranger to comics, having made quite a few between his Bighead books, his Darth Vader comics, and his several autobiographical works. Using his simple cartooning style and witty writing, he’s able to make things both touching and funny. In A Matter of Life, Brown explores his religious upbringing with a pastor as a father and his eventual atheism, and how it all plays into raising his own son.

The first few pages are an opening shot of space, with sparse narration telling how Brown believed in God as a child, but eventually realized that he didn’t any longer. What follows are alternating scenes of Brown as a child going to church, going on mission trips, and more and scenes from his current life with his son Oscar. As Brown grew into a teenager, he found reasons to skip church and soon learned more about other belief systems, finding that many were pretty similar. In high school, one of Brown’s friends would be the catalyst that would make him learn and questions, resulting in his eventual realization that he didn’t believe in God any longer. With the rest of the book being a series of scenes from his past and present, Brown shows how different his beliefs are from his father, how the counter beliefs influence his own child, and how his child will have the freedom to decide what he wants to do. 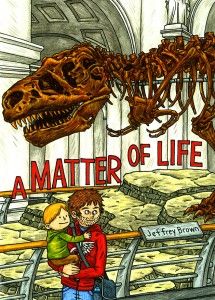 Brown’s art style is wonderfully simple, but it allows for his characters and stories to be that more much poignant. It’s more akin to cartooning than what people traditionally think as “comic art”. His depictions of little moments, like his young son chewing on his hair, are done in such a way that they don’t feel like little moments, but rather events unto themselves. The expressions that he’s able to capture with his style only help to make the emotional and intellectual journey of the comic that much better. Something else worth noting is the size and format of the book, 5.25″ x 8″, much smaller than a normal comic, but similar in size to Brown’s other work.

His writing, as always, is sharp and often humorous, but always makes his point clear. While it’s interesting to see which pieces of his childhood that Brown chose to display, the personal nature and the effortless way with which Brown writes made this a story that is full of feeling and thought, and it’s rather enjoyable.

A Matter of Life struck a personal note like few other comics have due to the subject. I grew up in a religious household in a very religious town in the state of Alabama. As I grew older, I learned more and more about the world and slowly realized that I didn’t believe in God, much like Brown. As an atheist in the South, it’s not often that you can experience the company of someone with a similar experience, but  having shared that experience made reading this story even better, because I could relate to Brown as he both endured as a child and changed as an adult. This made A Matter of Life not only one of my favorite Brown works, but also a recent favorite from Top Shelf.

Editorial: Digital vs. Physical – slow down,… Last night I sat down with a pile of comic books I had already read. The current Flash and Wonder…

The Fangirl Concern: Gail Simone Off of Batgirl Writers are fluid in the big two comic publishers. That is as bankable as the fan outrage that will pour…

Review: Hack/Slash #15 If you like action, gore, horror, monsters, and pretty women, then you are probably already reading Hack/Slash from Image Comics.…

Tags: A Matter of Life, atheism, comics, featured, It's All In The Trades, Jeffrey Brown, religion, Reviews, Top Shelf
Comments are closed.
May 2020