Batman: The Killing Joke has to arguably be one of the best, if not the best, singular Joker stories ever written. I dare say it’s one of Alan Moore’s best works, come to think of it. Watchmen was an epic unlike no other, with characters put into an epic 12 issue series that forever changed the face of comic books. With the Killing Joke, Alan Moore’s script takes the Joker and brings him to an entirely new light. Never before had we seen the Joker like this. Never before had we seen such brutality in a mainstream comic. Never before had such an established character been approached quite like this. The cover alone speaks for itself. The words and artwork inside speak so much more. Let’s listen to what they have to say. Let’s review Batman: The Killing Joke.

We start with rain. Raindrops rippling in puddles along the entrance to Arkham Asylum, Gotham’s home for the criminally insane. We see headlights… Headlights to the Batmobile. For the next two pages, no words are given. We’re given a visual of the Batman, making his way through the Asylum, Commisioner Gordon in tow, as they head to the cell of the Joker, Gotham’s clown prince of crime. It’s simple how it starts. Batman is here to talk. The Dark Knight’s mind has been filled, as of late, with thoughts on his and the Joker’s relationship. How it is, how it could end, and hopes on how to stop the eventual suicide road they’ve both chosen for each other. The Joker simply flips his cards, either really focused on his game of Solitare, or just not really caring what the Caped Crusader has to say. Either way, it doesn’t take long for Batman to figure out that the Joker just isn’t paying any attention. Grabbing him by the hand, both the Joker and Bats pull back, white make-up now on Batman’s glove. It doesn’t take a master detective to figure out something’s wrong, and within seconds, Batman has realized that the Joker has escaped.

With a story like this, it takes way more than the first 5 pages to get us settled into the story. Not only is this a story about the current state of relationship 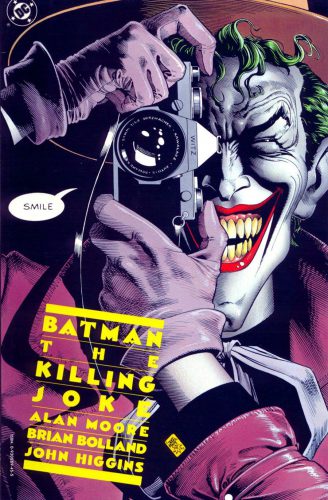 between Batman and the Joker, but it’s also about beginnings. Alan Moore takes on a road rarely traveled as we discover just how the Joker began. Now, you can take it just how Joker says it later on in this story “Sometimes I remember it happening one way, sometimes another…” and in that sense, this fits. Alan Moore gives us a very clear sense of events that not only took place in the past, but that are taking place in the present. The events in this book literally change the lives of all those involved, from Batman himself, to Gordon, and most of all, his daughter Barbara. Alan Moore pulls no punches here, and takes the Joker to his fullest potential. I don’t think a story like this had been done before with the character, but the events that unfold, as per Moore’s masterful script, leave this as one of the best stories ever told in the medium. Here, I think Moore is in his prime, coming off works like Watchmen and Miracleman, to bring us a very gripping and near insane Joker story. It’s a masterpiece, and like the works of Frank Miller on Batman, Alan Moore’s work here set the standard for all future Joker stories to be told.

Brian Bolland’s work here is like Dave Gibbons work on Watchmen. It’s perfect in that it adds wonderfully to Alan Moore’s script. I don’t think any other artist, including Gibbons himself could have done the type of detailed work that Bolland does here. His lines are crisp, his visuals stunning, his emotion in each panel astounding. From the shots fired in the Gordon apartment right down to the fight between Joker and Batman, and even so much as the ripples of raindrops in the puddles, Brain Bolland’s artwork here is as timeless as Moore’s writing. They both complement each other perfectly, one giving us the sense, the other giving us the visual. In addition to that, credit must certainly be given to the colorist, John Higgins. Color is very important here, as it conveys many different types of emotion as the story goes on. Joker is filled with wild, vibrant colors, while things happening in the “normal” world are as they should be. When things again take a turn, color comes back into play, feeding into your emotion as you read. It’s amazing to look at and such a wonder to be a part of as you read.

When you read certain issues or graphic novels, the ones that really stick out give you that feeling of awe. When I finished reading Batman: Year One, I felt that way. The same stood for Todd McFarlane’s Spider-Man: Torment, Miller’s The Dark Knight Returns, Waid and Ross’s Kingdom Come, and so many more. The Killing Joke falls right into that small list of books that are just so damn good, you can’t put them down, and when you do, you have to tell anyone that will listen that the MUST read this. This is a hardcore Batman story, and it’s story unlike no other. If you haven’t read this yet, you need to.

I got this book out of a collection of comics I bought not long ago. It was tucked away in the back of a box filled with Batman issues, just sitting there. I’d heard of the story before, but had never read it. In a bookstore here in the town I live in, I’ve seen it from time to time, but never had the inclination to pick it up. Pulling it out of that comic box, I couldn’t believe what I was about to read. I set it aside in a small pile of books I wanted to look through. When I finished going through the rest of the collection, I came back to this. Out of all he others I had in this pile, this was the one that called to me the most. Picking it up, I read in stunned silence for the next hour or so.

Batman: The Killing Joke is a must read for any comic fan. It’s a story I think holds very true today to the relationship both Batman and Joker hold for each other. This book is stunning, gripping, calculating, and intense. Find it. Pick it up. Read it. You won’t be disappointed.

Parental Concern: Not for the little ones. Lots of more adult oriented material in here. If DC says it’s for mature readers, I’ll stick by that.