The story is as follows: It’s 1986, and the Russians and Americans have joined together for a rather fantastic test in space. Astronaut Creighton Glenn and Cosmonaut Stefan Tatianov have volunteered to have themselves coated in a new type of suit: A metallic type suit that bonds as a second skin to the user. It’s able to keep internal pressure at comfortable levels, while holding firm against intense pressure to the user. The suit also acts as a conductor of sorts, allowing the person inside to interface with machines, heightening senses and strength to superb levels. Not only is this venture to bring about a new level of space travel and length in space, but also to help bring the two countries closer together. For 242 days, it works. As the two, now clad in the Chrome suits, attempt re-entry back to Earth, something goes wrong. The controls for the shuttle falter, the heat shield separates from the shuttle, and it crashes in the Mojave Desert! As the rescue teams arrive, they are able to find two things: A smear of Chrome. It can only be explained as what is left of one of the Astronauts. The other is, one survived. But which one? The Russian, or the American? That, my friends, is the question that needs answering. 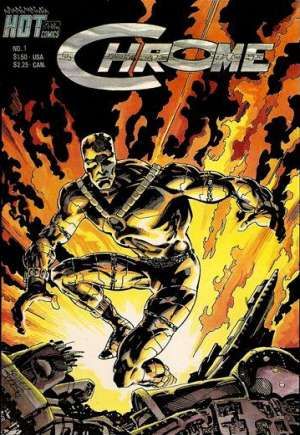 Peter Gillis’ script is a little hard to follow at first. We start off after the crash for the first few pages, then go back nearly a year to the beginning of the joint space venture. As the story progresses, not many of the characters are really fleshed out. We get a great origin for Chrome, but only a little is put into other characters that could have a real impact on the series. Walter Quantrell, the doctor who is there when Chrome wakes from the crash, no doubt can become an interesting character, but so little is put into him. With Chrome, Peter Gillis puts it all in there. Whoever he is, you get the sense that once this metal suit has bonded to the skin, the astronaut is truly alone. After the crash, it can’t be removed without killing the host. Chrome is even more isolated now. Gillis really brings about that sense of loneliness and loss to Chrome.

Kelly Jones’ pencils are fantastic here. Take a look at the cover. Go on, I’ll wait. Done drooling? The interior artwork stays true to the work done on the cover. The characters inside are drawn to give each a look of their own, and much detail is put into the look of Chrome. The artwork almost has an early Valiant feel to it, but where Valiant was bland in the beginning, this doesn’t feel that way. It feels different, and unique.

If you’ve read my review of Uncanny Annual #11 (link above), then you’ll know that this was in that stack of issues I just tossed aside. After I dove into the world of the X-Men, I started to look through that stack. Chrome became my second comic book. It’s funny though. I can still smell the air at my grandma’s house. I can feel the wind rustle that plastic bag that held my first stack of comics. I can still feel that concrete porch on my pre-teen butt (it was as uncomfortable then as it is now). X-Men may have let me peek into the world of comics, but Chrome let me open the door. It’s stuck with me that much. Hell, I should have talked about this on podcast #17! I can even remember arguing with myself on which issue to read after this one was finished. The Spectre or the Phantom? Tough choice for a 12 year old.

This issue may or may not appeal to everyone. That’s fine. If you can find it in a dollar bin, pick it up. It’s well worth a buck. I can remember, for years afterward, still searching for the other two issues in the series. Yes, it only went three issues, but that’s not the comic’s fault. Hot Comics cancelled the series after 3 issues and went out of business shortly afterward. It could have easily been one of the better Indie comics of the ’80’s, if left to run a little longer. Look at it this way though: Chrome helped to bring me into a world that I had only just begun to see. That second comic book that I ever read put me on the path that I’m on now. I’m now a reviewer, podcast host, P.R. guy for this awesome site, and one helluva swell dude. Well, at least my wife and kids think so.

Tim Morse is a reviewer, podcast host, and the Public Relations Manager for SMC. He also likes to play Magic: The Gathering and role-play in his spare time.  Most of the time, he’s the voice behind SMC’s twitter, which you can follow @stashmycomics.