Here’s a quote taken from Stan Lee’s book, Son of Origins: ” There is one shining star in the Marvel galaxy whose origin turns me on perhaps a bit more than some of the others. There is one particular character whose creation was somewhat more of a challenge, somewhat more difficult to work on and somewhat more satisfying to savor when it was finally completed.” He’s talking about Daredevil, ladies and gents. The Man Without Fear. The Blind Lawyer. Good ol’ Matt Murdock. Where would the Marvel Universe be without one of it’s star players? He’s so iconic that Frank Miller redefined him as a dark and gritty character the likes of Batman would be impressed with. The story-arc with Bullseye, Elektra and Murdock himself is hailed as one of the best in comics. Kevin Smith of Clerks and Mallrats fame even took a chance with the character. His 8 issue start helped to set the standard for the series. Brian Michael Bendis pushed the line even further with his four year run that is still talked about in comic circles.

I could go on and on about how Miller’s Daredevil is significantly better than the likes of Smith or even Bendis, or how I think that Waid’s Daredevil is the best so far, but that’s not what this is about. This is about that first issue. That story that got this entire ball of wax rolling. Issue #1. Who better to create such an amazing character than the man himself? Stan Lee’s writing accompanied by Bill Everett’s artwork coalesced to craft an amazing origin, and a very well told story. 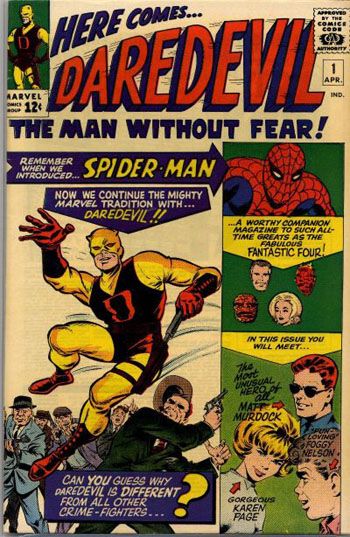 It’s a dark, seedy night in the middle of New York City, and at Fogwell’s Gym, no good can be taking place there. Some goons employed by the Fixer, a man known to buy off boxers and “fix” fights, are playing cards, waiting for the boss to arrive. All is as it should be, until a strange noise is heard. As the men turn around, they spot a yellow and black clad swashbuckler who’s on a mission of his own: Find the murderer of Battlin’ Murdock!  The guys obviously don’t want to talk, so the fight’s on! It’s not much for the Man Without Fear to take these goons down. A little billy club action here, along with kicks and punches and some witty banter, and the goons are down for the count. Daredevil then asks the question: “Where is the Fixer, and who killed Battlin’ Murdock?”  And so it begins.

The origin for Daredevil is told in two parts. One, as Daredevil as a man and crime-fighter, but the other as a boy who just loves his dad, and wants to what it takes to make him happy, even if it means sacrificing his own wants and needs. Stan Lee crafts an excellent tale and put so much into so few pages. Who would have thought that a blind kid could become, not only a lawyer, but one of the best super-heroes to grace the streets of New York? Lee’s writing really pulls you in and captures you, captivates you, and keeps you in awe and wonder until that final panel. Stan Lee’s not finished there though. He fills those pages with excitement and action, your eyes soaking in the words and watching the panels blend into solid movement. You’re in his world now, and what a place it is to be.  The creation of the powers, bringing Murdock and Foggy Nelson to life, along with the struggles that not only Matt himself has to go through, but his father, Jack Murdock, and his struggle to have his son be proud of him… It’s a wonder and a joy to read. If only we could have been kids in the ’60’s?  I honestly couldn’t think of anybody better to bring these characters to life than Stan Lee.

With Jack Kirby working on the likes of Fantastic Four and other titles at Marvel, and Steve Ditko plugging away at Spider-Man, who better to bring to the artist’s table than Bill Everett. His pencils have more of a Ditko feel than anything else, but that’s where it ends. Everett’s artwork is all his own, and in the middle of all these characters that would grow to become some of the most well known heroes in comics, Everett carves his own niche in the wall. His characters are distinct. The bad guys look, well, bad. Rough, tough, and gloomy. Everything a bad dude should be. His artwork on expression is great too. You can feel the pain as Matt suffers for the loss of dad, but you smile and feel very proud as Daredevil swings into action, clobbering goons at every turn. Bill Everett’s pencils show this perfectly, and I think I like his work just a bit more than Ditko’s. It’s not sloppy, but well honed into a visual that we get to watch move. It’s a sight to behold.

Though my collection of Daredevil is small (currently I have 33 total issues of Daredevil) he’s one of my favorite characters. He was Spidey’s best friend next to Human Torch, so I naturally gravitated toward him. The first few issues I read were #’s 305 and 306, which also had Spidey in it. When I finished with those, it was such a different feel to me. The tone of the stories themselves were different than the light heartedness of the Spider titles. I was amazed. I’d known of the character before that, but after reading him, I was now a fan. What Lee and Everett had created, I was reading some 300 issues later, and after reading this first issue, I can see just how much the character has changed, but how much he stayed the same too. Looking at where he is now with Mark Waid’s attempt at him, it feels like he’s been taken back to his roots. After everything Murdock has been through in the comics, he deserves that.

In a world where a radioactive spill or an irradiated spider can create the next great superhero, a kid who loses his sight and not only becomes a lawyer, but also a fearless hero out to find the murderer of his father. It all stems from that, and even now, Matt Murdock is still that boy who just wants to make his dad happy. With what Stan Lee created, to what Mark Waid now writes, that’s always stayed true. You don’t need to see to be able to know that. You need to feel it. In Daredevil, that’s 100% possible.