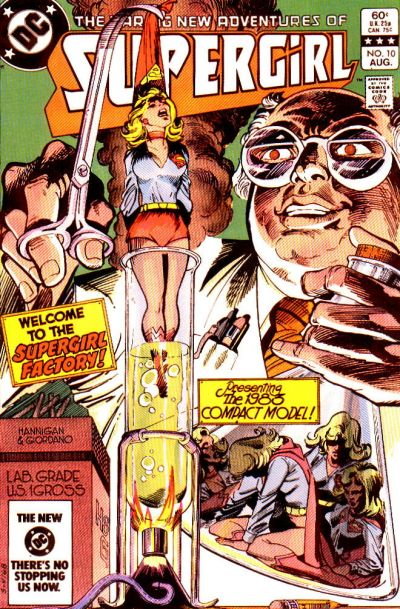 I started collecting this about one year ago, when I found issue #10 at a flea market. I loved the cover so much that I was hooked to collect the whole series. Now I’ve got all the issues in NM- except for one which has water damage. Is the series any good?

Well I can’t say it aged well. The dialog is pretty cheesy despite the series having great ideas and themes. For instance, while firing her heat-vision at Matrix-Prime – a robot who spews smaller robots from his chest cavity – Supergirl says: “What say I call your little robot factory closed… on account of the heat!” *groan* There’s a lot of that and sometimes an issue can take a over 30 minutes to read from the overflowing dialog and thought balloons.

The art however is quite good. That’s why I wanted these in high grade. The paper quality on a book this age can greatly affect the viewing of the pencils. Especially on pulpy paper and lower quality printing jobs from several decades ago. For the most part, the pencils are by Infantino and inked by Oksner. And they’re brilliant! The anatomy and whatnot may be off here and there but the dynamism more than makes up for it. The interiors contain some great shots of Chicago – Supergirl’s new home – and some of the flashbacks are absolutely stunning! I wish I could describe exactly what about the line work I love so much but I have to be content with saying there’s an ineffable quality to it which resonates with me. A lot of the covers are either by Giordano or inked by Giordano and are generally quite memorable. 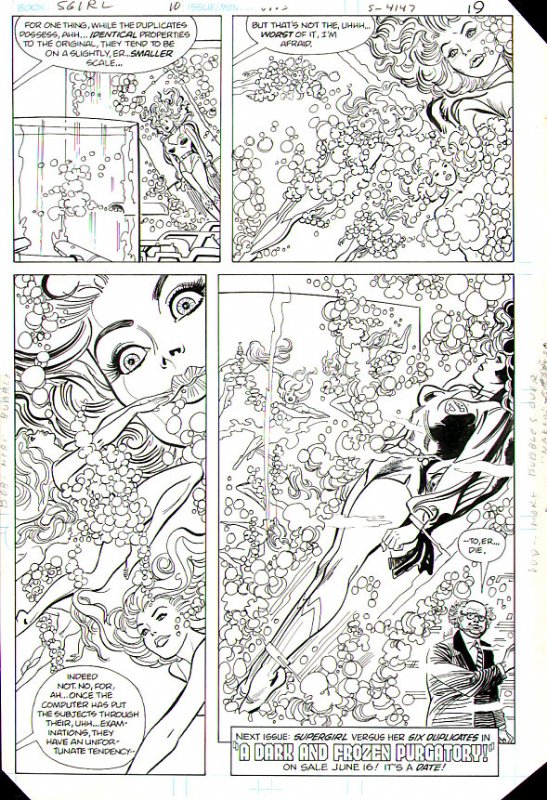 My favorite issues are 10-12 which are a mini “clone saga” of sorts. A mad scientist is employed to clone Supergirl but something happens which does not allow for full sized clones. So Supergirl ends up having to fight a bunch of mini-supergirls. I know that sounds silly but the way it’s done is so unapologetically wacky that it won me over! Additionally, the manner in which Supergirl solves this problem is clever and reveals much about her character. These 3 issues are some of my favorites in my collection. Issue 19 is also a favorite of mine as it tells the story of one of these clones. The conclusion is actually quite emotionally stirring in that the clone must come to terms with not having an identity of her own. It didn’t occur to me at the time but thinking back on it I now realize that technically there are half a dozen or so Supergirl clones in the DCU that we’ve never heard from because they chose to lead civilian lives. Mind = Blown.

Starting at issue #2 if I’m not mistaken there is a Lois Lane back up which is beautifully drawn by Bob Oksner but the daytime drama type of story didn’t draw me in so I didn’t read each one. Someday I’ll go back to read just those because they’ve been praised by some fans. But as of yet, I’ve no interest of my own to read those stories.

This series certainly is not a definitive Supergirl story mostly because there are too many villains that aren’t connected to Supergirl in a meaningful way. In fact most of them come across as one-dimensional. there are a few standouts such as the clones I mentioned and the last villain to appear in the series called The Future. This series also contains the first appearance of Reactron who eventually becomes a key player in the current Supergirl series.

Yet another weakness in this book is the subplot of Supergirl’s romantic and college life. The scripts never really successfully balance the supeheroic aspects with the romance. In most stories, the action and main plots are always resolved but the romance isn’t and is simply pushed into the next issue until the series is abruptly canceled at issue 23 and the readers never get closure.

Despite it’s weaknesses this series does have it’s charm and I enjoy it for what it is.  A fluffy but peppy superhero comic with great vintage artwork. If you see it in the discount bin thumb through it and see if it turns your crank.

The 5 “New 52″ Books I Most Hope Will Be Good So we've read the previews, heard the initial buzz and placed our bets. By now we have an idea of…

Comics for Noobs: September 27th September is coming to a close, and with it, this last Wednesday was the last new comic day of September.…