I don’t know how well anyone else remembers this, but back in the 90’s DC Comics and Marvel Comics collaborated on a four issue mini-series. The story pitted the Big Two’s marquee (and not so marquee) characters against each other in a struggle to save their respective universes. Fans cast their votes on who they thought would win in a fight between Superman and the Hulk, or Batman versus Captain America, new characters were created and unmade, and a whole universe was born. This romp through the combined universes was one of my favorite stories growing up.

For a combined effort from the companies, the plot is not very complex. Two “brothers” which represent the 616 and the DCU have realized each other. The last time that happened they fought and the energy from that battle caused creation to end and begin again. This time they have chosen champions from their respective universes to decide which reality stays in existence.

I only have two bugaboos with the story, the fan vote and the contestants chosen. I understand that fans will be pretty biased, especially when you’re pitting a certain short Canadian against a Czarnian bastich. But, some of the outcomes of the match-ups obviously lean to the more popular character. Which leads me to my next point: the match-ups. For the most part, they got it right. The biggest names in both universes were chosen to duke it out. Except not all of them were the tops of superherodom. As much as I like Robin and Jubilee I don’t understand their involvement, aside from the romantic angle. And if I’m going to watch two “bad” guys fight, I’d rather watch Deadpool and Deathstroke tussle than Elektra and Catwoman. 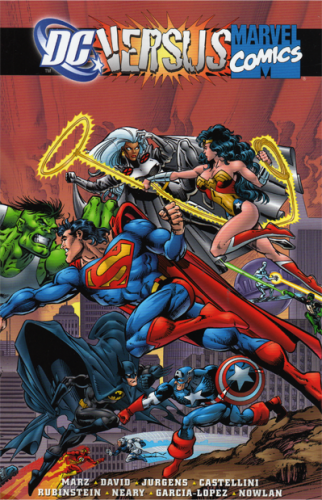 With a writing crew consisting of Ron Marz and Peter David how could you not have magic? The two took a basic plot and told a great character story from it. Even though the fights were short, they were well scripted. And Access and his predecessor were well written despite being a stunt to explain the situation. The overall story is interesting and the resolution to it is great, I loved the comparisons of Batman and Captain America.

I know drawing this many characters can’t be easy, but Dan Jurgens and Claudio Castellini didn’t seem to have any problem. New character designs are simple, yet brilliant. While the costumes are basically mash-ups of existing costumes they aren’t gaudy, but clean. Existing characters are well drawn and despite the amount of work Jurgens and Castellini had, none of the artwork suffered for it.

One good thing, at least in my opinion, that spun out of this was Access. A character created to bridge the gap between the two continuities and keep them from merging again. He had a couple mini-series and a guest appearance in one issue of Green Lantern. After that, neither hide nor hair of him has been seen in a comic since. Axel Asher, aside from having an awesome name, was a great character with a great premise. Being able to merge two characters together is a unique power with limitless possibilities. He should have made an appearance in the semi-recent JLA/Avengers crossover, but alas he was nowhere to be seen. I wish the two companies would resurrect Access, but with DC and Marvel being owned by WB and Disney, respectively, I don’t see it happening.

Yes the story is contrived and the fan vote made some odd decisions, but overall it’s a good read. It’s not often that these two companies collaborate and when it happens, I think it’s worth picking up. I mean, where else can you see Superman get punched in the face by Thor?

Amalgam Comics: A look back In my last Back Issue Bin, I spoke about DC vs. Marvel. Between issues 3 and 4 of that series…

Should Characters in Comics Stay Dead? Life and death in a comic book is treated relatively lightly nowadays. Characters die and return in the space of…

Back Issue Bin To The Future: Green Lantern – Emerald… Green Lantern is my favorite character in comics. Between individual issues, collected editions, and other GL paraphernalia I have way…