With the conformation of Archer and Armstrong a few months ago, it’s pretty safe to assume that in addition to seeing Armstrong, we’re going to see his brother, Gilad. One can’t come without the other, or what’s the point? Gilad was a cornerstone in the original Valiant Universe, having direct ties to X-O Manowar and Bloodshot, both in the past and present respectively. Though his first appearance was in Solar, Man of the Atom #10, it really took his own title to showcase just how influential and critical Gilad was to the Valiant Universe. What better way to really bring him in than during the Universe shattering event of Unity? Read on, comic fans, as we take a look at Valiant’s Eternal Warrior #1.

Though it’s chapter two of Unity, this is really a story about Gilad and his past, which directly effects his future. It all starts at a time before recorded history. A battle is taking place between two tribes. One is a tribe of large, dark skinned men, the other is the warrior tribe the Gilad 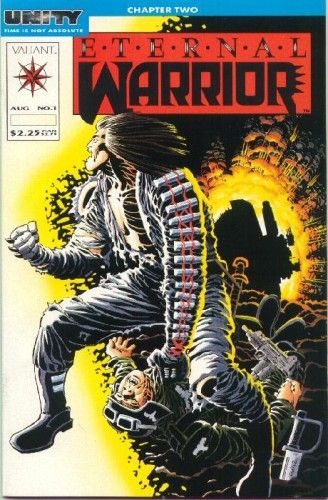 belongs to. Gilad has taken most of the other tribes men out already, and as he easily dispatches another, the rest of his tribe rush in to end the battle. Gilad, though very young at this point, holds the Leopard Spirit in him, and with that also comes arrogance and a sense that he is much better than other men. He is, that there is no doubt, but where Gilad is very sure of himself, his brother Aram is the opposite. Where Gilad is fast, Aram is slow, where Gilad is strong, Aram is stronger. The two brothers complement each other though, and through the years, they start to drift apart. Sure, they both go on raids and hunting parties, pillaging from other villages, taking what they want and need. As Gilad prepares for another battle, Aram, though he goes to fight along side his brother, grows tired of it. With the battle in Mesopotamia, both brothers learn very harshly that their paths must go different ways.

Out of everything I’ve read from Jim Shooter, this has to be one of his better pieces of work. It’s very dialogue heavy, and filled with a LOT of history, but it is very much worth it. Where Harbinger struggled with a lot of unanswered questions until the #0 issue came out, Eternal Warrior doesn’t fall to that same bullet. The history is here, and it’s very rich. We get to see Gilad and Aram grow and separate, and we also get to see how each of them turn in to much different men. Jim Shooter took great care with this, and it seems to me that more effort was put in here than on other titles. The characters don’t feel like archetypes or two-dimensional. They feel very much alive. They are characters that I want to invest time in and learn more about. Here, Shooter succeeds greatly.

The artwork, though like most other Valiant titles, stands out just a little bit more to me. John Dixon definitely has a classic feel to his work, but it doesn’t look stiff to me at all. It looks very fluid, and even with large scale panels, it still looks great. Character appearances stay consistent, even through the years (pun intended). It’s some of the better artwork I’ve seen for Valiant at the time.

Though chapter one of Unity was a free issue handed out at comic stores, chapter two belongs here in the past, which as much as the future is a part of the Valiant Universe, so is this. Where Rai is the cornerstone of the future, Gilad is the cornerstone of the past. With Archer and Armstrong hitting shelves this summer, will we get any hint as to Aram’s past? Could Gilad make an appearance in the first issue? I hope so. If Aram is there, Gilad can’t be far behind. He is, after all, faster than Aram, right? Right.