I couldn’t think of any better way to spend a part of October than reading at least one thing with Ash in it.  I mean, after all that man has been though, what with fighting the Deadites in Evil Dead and them moving on to Marvel Zombies.  Does he deserve to deal with more after that?  Of course he does!  He’s Ash after all, and he’s our everyman hero!  And with that, Ash falls into the paths of two very popular horror film icons; Freddy Krueger and JasonV

Have you seen Freddy vs. Jason? It was kind of a big deal when it came out, and everybody chose a side.  I can remember going to the theater to see it with some friends and we all bet on who was going to win.  I chose Freddy.  He’s been my favorite of the slasher flicks since I was a kid.  I can still remember seeing  the scene in A Nightmare on Elm St. where Nancy is in the dream world and she sees her friend dragged down the hall in a body bag.  That scared the socks off me!  We’ve all got that memory in one form or another.  It was either Nightmare, Friday the 13th, or Halloween, but one of them got you, and it scared you so bad you stayed up all night just to make sure you’d make it to the next day.  I know I did. 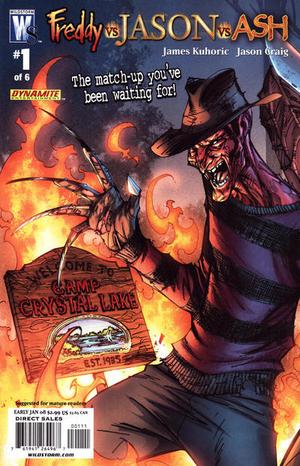 OK, so this story takes place 5 years after the events of the Film Freddy vs. Jason.  For reasons only known to victims of horror movies or books, Laurie and Will (two that survived the events of the film) have to go back to Camp Crystal Lake – now being renamed Forest Green – just to make sure that Jason and Freddy really dead. Wait a second… Really? Come on!  If it was me, I’d have moved as far away as possible and stayed away.  But alas, if they didn’t go back then we wouldn’t have an issue to review, now would we?  Right… on with the plot.  So, while Laurie and Will are getting toasted by Jason (who can never die in the first place) Forest Green is busy with Christmas cheer in none other than an S-Mart.  Shop smart… Shop S-Mart!  And so starts what will ultimately lead to the ultimate showdown!

Jeff Katz brought along the story but it was James Kuhoric who wrote this issue exactly how it needed to be written.  It establishes everything.  When he brings us to S-Mart, we meet the teenagers of the story.  It lays an opening for Ash to show up.  During the course of the issue, James does a great job of bringing you up to speed on what happened in the movie and also what took place during the past 5 years.  This is a foundation issue for the 6 part series and it works wonderfully.

Jason Craig’s artwork was great.  It’s not flashy but very rounded and natural.  I don’t think it could have gotten better for this issue.  You can see the fear and panic in Laurie’s eyes as she’s being chased to her doom.  Just because it’s an issue based on film characters, Jason didn’t take that lightly.  He really did put the effort into each panel, and the detail shows.  I actually took the time to soak in each panel before I moved on.

This issue was just plain fun to read.  From the first page to the last the story moved along at a great pace and the art was visually appealing.  I can’t wait the get the rest of series to see who wins!  Who are you gonna pick… Jason, Freddy, or Ash?  I think I”m going to put my money on Ash this time.  Bring on the Boomstick!

Script: 6/10
Artwork: 8/10
Parental Concern: Red for just about every reason.

—
StashMyComics.com is a free comics cataloging software website for organizing your comic book collection. Sign up here for a free account to start tracking your comics collection in less than a minute, completely free.

Meanwhile by Jason Shiga: The App Remember that review SMC's Jason Newcomb did of this book early last year?  How about the podcast interview with Jason Shiga himself,…

StashMyComics.com interview with Jason Shiga Jason Shiga is a creative and innovative comics talent mostly known for his interactive style comic books. Meanwhile is his…

Fan Film Friday: Marvel Zombies Welcome to the latest addition to the SMC blog, Fan Film Fridays!  What is this you ask?  Well, just like…