With the success of a toy line and cartoon, if it hasn’t already come out, a comic is not far behind. It’s kind of a curse, if you look at it. If it’s geared for kids, watched by kids, and enjoyed by kids, then the comic should fall in those lines too, right? Not in this case. G. I. Joe, as a comic book, was rather dark. Characters died, for crying out loud!

Larry Hama, who stayed with the series for nearly all of it’s run, tried to write a comic that not only fans of the toys and cartoon could enjoy, but also somebody a little older. If it, or Transformers for that matter, had been written along the lines of Archie or Richie Rich, where everyone was all smiles at the end, both titles would have fallen into the realm of the unreadable: the trash. Thank the maker it didn’t though, for we got some really great stories out of it, namely this one here. A ground breaking issue in its own right, the silent issue did what no other issue had done before it: let the action speak for itself. Let’s see just how well it did with Larry Hama’s G. I. Joe #21. 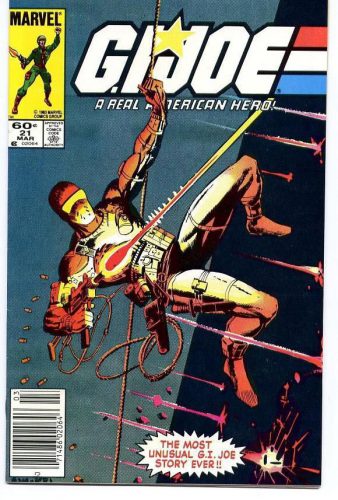 It all starts with a white ninja flying attached to a C.L.A.W., headed toward a secret Cobra base deep in the mountains.  As he swoops in, he lands before the infamous Cobra Commander. With a well calculated swipe of the sword, the white ninja, or Storm Shadow as we know him, cuts a person sized package.  Inside, it’s none other than Scarlett! Cobra Commander orders her to be taken away and placed inside the dungeon, and as Storm Shadow bids his master’s command, we see the Joe’s response to one of their own being kidnapped.  A C-130 Hercules comes in just low enough to release it’s only cargo. The black , silent ninja Snake Eyes.

With a story like this, you have to make sure that the images are going to come across strong. The story cannot be weak, or falter in any way, or else it can’t work. Here, Larry Hama does a fantastic job. The story he crafts here allows you to immerse yourself into this story and be very active in the reading of the story. With no words, it’s up to you, the reader, to invest yourself just a little deeper into the story. As we watch Destro looking at the radar, we see that there is obviously more to him than has been eluded to. We can see, through image only, just how contemplative he is, and as he prepares his next move.

As Hama’s writing needed to fit the story, so too did his artwork. With a story without words, the artwork must work overtime to convey what words would normally do. Here, it works perfectly. The unknown intent on Storm Shadow’s face as he attempts to caress Scarlett. The masked reactions from Snake Eyes as he fights with the Cobra Guards to get to, and attempt to rescue Scarlett. The quickness that some of the action takes place. All this must bring across what words can’t. Larry Hama’s artwork does that.

This issue is significant for three reasons. First: it was the first of several silent issues, all of which were widely accepted by fans. Second: it’s the first appearance of Storm Shadow in comics, and third: we get to see that neat little tattoo that both Snake Eyes and Storm Shadow share on their right forearms. It brings up an awful lot of questions, but it’s also the start of what becomes a very rich history for the two characters. So rich in fact that it bleeds over into the toy line and eventual live action movie (say what you want about it, they at least put it in there!).

For me, this was fun to read. I picked this up at a Flea Market, and though it’s a sixth printing, that didn’t matter. I was ready to jump in to this! To me, G. I. Joe comics were always just a bit more aggressive than their cartoon counterparts. I mean, in this issue alone, two Cobra Guards die! Ouch! The cool thing was that Larry Hama was not afraid to tell a grown-up story. He does that here, and that I think is why it works so much, and has stuck with fans for so long. It’s a sought after issue, but if you can pick up one of the many printings, do it. It’s worth it for story alone. Just don’t say a word while reading it.

Art: 7/10
Script: 8/10
Parental concern: Not much. No blood splatters or anything, just good ol’ rescuing. Yo Joe!

The StashMyComics Top 25 List: Heroes! Over these next 4 weeks, we are going to fill up your geek energy meter with the long awaited StashMyComics list…

Back Issue Bin to the Future: Concrete #1 When I was a teenager in the 90's, I can remember watching the increase in popularity for Dark Horse Comics. …

Back Issue Bin to the Future: Sonic the Hedgehog #1 How in the name of all that the mighty Stan Lee created is this comic going for near $70 on…