In the ’80’s, DC made an attempt to do a sort of restart on it’s core characters. Superman had the min-series “Man of Steel”, Green Lantern had “Emerald Dawn” and it’s sequel, and Batman had the most coveted of all: Year One. One title that I think gets looked over the most is Green Arrow’s the Longbow Hunters. Where Superman and Green Lantern were updated for modern times, Batman stayed in it’s main title and told the story of Bruce Wayne’s lead-up to his creation of Batman. What Frank Miller did to Batman has had a lasting effect on the character, and I think the same can be said about Mike Grell. The Longbow Hunters follows suit, but in a different sense; where Batman took place in his first year, The Longbow Hunters follows Oliver Queen to his 43rd year. It’s a reinvention that took place in what was then DC continuity and breathes life into what some would have called a severely two-dimensional character. Let’s take a look at Mike Grell’s tale of The Longbow Hunters. It’s told in three parts, but we’ll focus on the first.

We start in Seattle, where things aren’t going too well in the rainy city. Someone’s been combing the streets, killing prostitutes. 18 so far, with no end in sight. They call him the Seattle Slasher, and he’s put terror into the nights of this city. Fast forward to the next day, and we see Oliver Queen settling in from his move across country. People need change, and Queen is no exception to that. With the help of his longtime girlfriend Dinah Lance, or as we know her, the Black Canary, Oliver Queen is taking a much needed look at who he was, and who he wants to be. It was all about trick arrows and things being full of fun. It’s not like that anymore. Things are different, and with the Seattle Slasher making rounds, it helps to set the spark of that, and much more to come.

Mike Grell took on writing and artistic duties for this, so let’s take a look at his script first. I have to tell you, this mini-series is what helped me to see 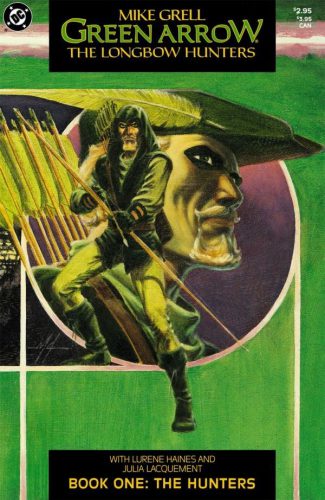 past the pure silliness that I thought was Green Arrow. At first, I attributed him to nothing more than a joke. A character that had no dimension, no attitude, no identity. After reading this, my whole viewpoint changed. Mike Grell took a C-list hero and made him relevant. Grell’s script reads like an adult crime drama, full of love, emotion, danger, suspense, and action. As I read the pages, I could watch these characters come alive. It’s rare in a comic to come across like that, but here, it shines. We get a great backstory on Queen’s life, a look at his childhood, his stuggles on the deserted island, and how that made him into what he would eventually be. Grell takes the goofiness out of Green Arrow and puts some much needed emotion into Oliver. That’s not to say that humor is tossed out the window. Far from it. Queen is still very much the man he was, but it’s his reflections on who he wants to be, or what he lost that he now has to reclaim, that makes this issue. He still has wit, humor, and charisma, everything he should have kept from before, but now he’s focused, driven, determined more than ever to be what he needs to be. Grell’s script is amazing, and the entire story keeps you enthralled.

As for Grell’s artwork, I have to say that the style is very fitting to the story. The cover looks like a canvas painting, and the interior artwork is equally impressive. The pencil work here is astounding, very detailed, and exceptionally layered. It most certainly has an older feel to it, and I think that’s the point. It’s not flashy, with rock hard physiques, model posing women, and carbon copy bad-guys, but just the opposite. Queen looks very much like a person should look, Dinah looks fantastic, but natural. Everything about this is captivating, visually, and it’s this type of artwork that helps to keep your attention with the script. The fact that Grell does both is more than enough for me.

Like I said earlier, before reading this, Green Arrow meant nothing to me as a character. The only thing I had known of him previously was the issue having to do with heroin, Green Lantern, and Speedy. Aside from that, nothing. I can’t remember who recommended this to me (probably Jason Newcomb, who’s always recommending awesome stuff that I never read until later, then wonder why I didn’t read it when he told me to), but I’m glad I took the time to read it. This story solidified Green Arrow as an important character to me. Since reading this, I’ve become a fan and am trying to get as much Grell Green Arrow as I can get my hands on. I’m an in-order type of guy though, so I have to start with issue 1, which just so happens to be the start of Green Arrow’s first ongoing series based solely on him, and it’s a direct result of just how well this did.

You want a good story? Read this. You want a great retelling of a kinda not cool character? Read this. Do you want something you can read again, and again, and never get tired of? Read this. The Longbow Hunters is one of those stories that is timeless. Though created in the ’80’s, the story itself can be told in any time period. A man recreating himself, going back to the foundation of what and why he started doing what he does, and the hell he has to put himself though along the way hold true in nearly any story. Still, Mike Grell makes it his own, and damn does he do an awesome job.

Parental Concern: Some nudity and some pretty intense violence.