The first title announced for Valiant’s new release was X-O Manowar. It’s safe to say that this announcement caused quite a stir of excitement amongst hardcore Valiant fans across the comic spectrum, but when Valiant announced the second release, I think I could almost hear the cheers that Harbinger was coming back. Everything starts somewhere though, and I just had to get my hands on a copy of the very first Harbinger issue that I had so long ago. We need to see where it all started and maybe we can even figure out why copies of this particular issue go for $20 or more, before being CGC graded. Let’s go back to Valiant’s beginnings as we take a look at Harbinger #1!

Pete and Kris, two teenagers, are flying high above Interstate 95, just outside of Washington D.C. in a red sports car with a helicopter chasing after them. Though Kris may be normal, Pete is obviously very different. Pete is a Harbinger, a person with exceptional abilities that no normal person can have. Pete doesn’t even know what he’s capable of, but with what he can do, he’s able to lift and fly a car and enter people’s minds. Pete is obviously important and he knows this. Forcing the helicopter to land, Pete tries to find out why these men are following him. Before any real information comes out, Pete and Kris are in trouble again. Three other Harbinger’s have found them, and the battle is on. 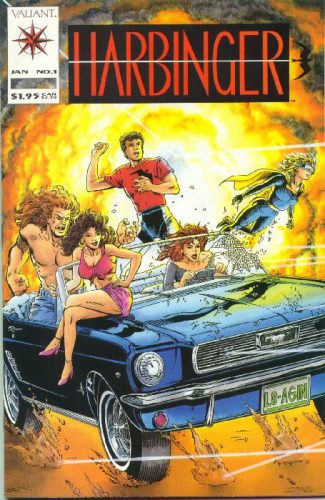 I had high hopes for Harbinger, I really did. Reading it when I was younger must have had a much different appeal to me than reading it now. Jim Shooter’s work here is not his best. It’s very clunky, dull, and not engaging at all. With the exception of Pete, none of the characters feel like they have any real personalities at all. Maybe I’m being to hard here, but when I read a comic, I’d like to be entertained, and with this, I was glad when it was over. We come in right in the middle of something, and given very very little information to anything having to do with events prior to this issue. We’re kind of left in the dark and as the comic moves, it doesn’t really answer any questions, or give a lingering hint that they could be answered in the future. If this is played right, it can really do good for a comic series, but here, it’s tossed aside in favor of convenient fixes and stiff dialogue. I really wanted this to be good for me, but I just can’t bring myself to make that claim.

David Lapham’s art is like most of Valiant’s at the time: Classic and stiff. That’s not what this needed. With a teenage title, artwork that was vibrant, exciting, and edgy would have worked wonders here, but instead we are left with characters that look nothing like teenagers, have a 50’s feel, and are very, very dull. Don’t get me wrong, if I were reading a Batman issue from the 60’s, the art would have been great, but with a title in the 90’s? It needed something much more that what it was given.

This was one of Valiant’s most popular titles, but for the life of me I can’t figure out why. CGC graded issues of this will go for almost $100 on eBay or some comic shop websites. Regular copies will go for as little as $20, but again, I can’t figure out why. It was definitely different when it came out. Marvel was knee deep in it’s own over produced mess and DC was busy killing it’s most popular character or putting out dull stories, so I can at least see that aspect. We wanted something different and new, but did Harbinger deliver that for me? No, it did not.

With Harbinger being announced as the second title in the new Valiant Universe, just from first glance I can see that it’s going to be a sight better than the original. The artwork already looks ten times greater, and with the story, we’ll just have to wait and see on that. It’s got to be better than this though…it has to be. If it’s not, then Harbinger could sink before it even gets a chance to float.

Harbinger #1 Preview The buildup and anticipation for the Summer of Valiant continues. Valiant Entertainment has released a six page lettered preview of…

Review: Harbinger #1 Before I begin my review I want to make it known that I am a complete Valiant noob. I have never…