When I saw this book on a shelf at a flea market, it stood out to me amongst the rest of the worn and tattered comics. Not because of it’s superior condition but because of it’s beautifully rendered cover. There was something about the line which I found to be masterfully elegant. I looked everywhere in the book for an art credit but there were no names. I purchased the book for $5 and took it home among a pile of other comic oddities I found that day.

This issue was not yet in the StashMyComics.com database so I did some research to find out more information to then upload it. It’s there now and if you take a look at the listing you’ll see John Romita Sr. credited for the artwork. It would seem that in those days, to be an artist on a romance comic was not considered very glamorous. That’s in an age where artists were demonized for drawing comics altogether. The result is that many illustrators asked to not be publicly credited for their work. But if you compare this to Romita’s credited work, the stylistic similarities become unmistakable. 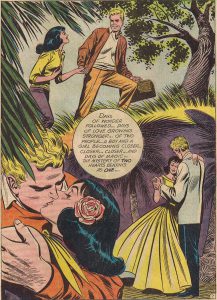 The striking cover has a Roy Lichtenstein vibe to it. But where that artist co-opted others’ works and  re-contextualized them to give the visuals an ironic and slightly sardonic twist, this piece of comic art is innocent and seemingly sincere. In that sense it is much more successful than Lichtenstein’s work ever was. And if you ask me, Roy had no business snidely mocking comic and commercial art to further his career. But that’s a digression for a different article. The point is I bought this because of the great cover and I thought it would display nicely in a frame (it does). What about the script?

There are actually four stories in this book. All of them appear to be drawn and written by the same person except they are evidently inked by different artists. The third story is just a poem submitted by a reader named Virgin (that’s not a joke). All of the stories are essentially the same. A young woman’s world is turned around when she falls in love with a man – with money. But will he love her back? And in the process rescue her from a life of misery and loneliness and swoop her away into an idyllic life of housewifery! Betty Friedan would not approve.

There’s a charming and quasi-hypnotic fairy tale tone to these stories. But a cursory knowledge of fairy tales reveals the stark difference between this and say, Cinderella. Where the latter character starts the story from a position of subjugation and ascends to a position of power, the opposite happens to the female characters in Heart Throbs #93. Listen, I didn’t expect to be reading a piece of feminist literature when I bought this comic and that’s not what I got. What I did get is a fantasy-ification of the reality women faced in the era the book was published. And it was probably meant to be exactly that, disposable escapism. What makes this difficult to accept is that the artwork is sophisticated in execution, leaving one wanting more substance in the script.

You have to step back and think that this was a product of its time. The Comics Code Authority was still fresh and enforced.  “Divorce shall not be treated humorously nor represented as desirable” and “illicit sex relations are to be neither hinted at or portrayed”. Finally, “respect for parents, the moral code and honorable behavior shall be fostered”. So you know, kissy kissy but no funny stuff. Everything clean and sanitized. In this Macarthyistic environment I guess a brilliant artist trying to earn a living has to write and draw something like Heart Throbs #93.

Oh well, at least it came with a free coupon for a book about how to reduce your “hips, thighs, calves, ankles for slenderized legs.”*

*I guess I owe more to Lichtenstein than I would care to admit.

Say What?! – Stuff from comics you won’t believe… Say What?! is back after a holiday hiatus. And it's better than ever! Henceforth, Say What?! will no longer only…

Monsters Among Us By guest writer: Rob Wuest I have been a long time fan of the sci-fi, monster and mystery comics of…