Identity Crisis was a story that changed the DC Universe landscape. It was wrought with mystery, intrigue, and startling revelations about some of our most venerated characters. I know some readers abhor this story because of how the characters were mistreated, but it is a great character study and decently interesting plot. So if you haven’t read it, let me give you a rundown, and if you have read it just sit right there and take a trip into the past.

The story starts with the Elongated Man and Firehawk staked out waiting for a shady transaction to go down. Meanwhile other heroes around the DCU are spending quality time with their families. Elongated Man recounts how he met his wife and reveals that the reason he is out on patrol is because she is throwing him a surprise birthday party. At that moment the deal EM and Firehawk are watching goes south and Ralph gets a call from is wife that sounds like she is in trouble. Ralph makes it home too late and finds Sue’s badly burned body and a positive pregnancy test. After Sue’s death the heroes break off into teams to try and find her killer, but some of the old guard from the Justice League hang back because they all have a secret. 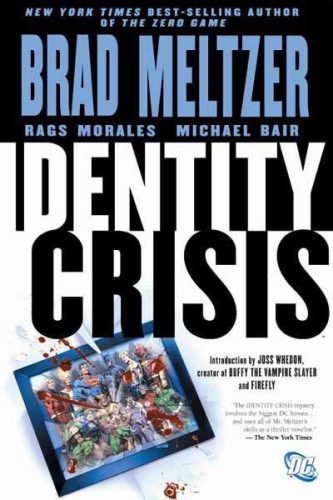 It seems that years before Dr. Light stumbled across Sue Dibny alone on the Justice League satellite. He proceeds to take advantage of her but is stopped by the League. To keep him from telling everyone about what happened they have Zatanna wipe his memory of the event. But, worried he could do it again, they take a vote of whether or not to try and change him completely. I don’t want to say too much more because it is a story you definitely have to read for yourself.

The plot constructed is a whodunnit tale, but what else would you expect from acclaimed mystery novelist Brad Meltzer. While some may argue that Meltzer drug one of comics most beloved characters through the mud (and he kind of did), it shouldn’t discount the story as a whole which is very well scripted. Meltzer wrote a decent mystery, even if the resolution was a little contrived.

Art from Rags Morales is fantastic. His incredible detail of facial expressions is a highlight of story. The ability he has to show the pain of loss on the faces of everyone from Batman to Elongated Man is a gift. When Batman and Robin receive the call about Robin’s father, the fear is palpable on the face of Batman. It is an image that will stick with you once you see it.

This is one of the quintessential stories from DC in the past 20 years. I don’t know where it fits with the new relaunch, but it is still worth reading. The story, even if a little hokey at times, is a great look into the inner-workings of being a superhero with a family. If you for some reason haven’t picked this up I highly recommend it.

Art: 8/10
Script: 7/10
Parental concern: There are graphic scenes and themes

Back Issue Bin To The Future: Green Lantern – Emerald… Green Lantern is my favorite character in comics. Between individual issues, collected editions, and other GL paraphernalia I have way…

Back Issue Bin to the Future: Irredeemable Vol. 1 In honor of Irredeemable releasing it's 37th and final issue I wanted to review Volume 1 of the series for…

At the Library: Justice League International Volume 1 I live in the mountains of Virginia. If you sit really still for just a few minutes you can hear…