There are a few moments in comic book history that are similar to this.  The Amazing Spider-Man, issues 96-98 come to mind, in where Peter Parker has to deal with his best friend Harry’s drug addiction.  Another that comes to mind is Green Lantern #85 and 86, in which Green Lantern and Green Arrow stand by and watch in horror as Speedy is about to shoot heroin.  Both of these story lines are very powerful in the aspect that they tackled a very tough issue, both socially and in comics.  Never before had an issue like that been observed, let alone specifically addressed in the pages of two very recognizable heroes.  It garnered a lot of press, some positive, some negative, but the point that needed to be given was out:  Substance abuse was a problem, and though super heroes were immune to many things, they were still men, and they too could become the victims of drug use.  It was a great idea too, in the aspect that most of the readers of these titles were younger, more impressionable boys and young men, and what better medium to address the issue than in their very own comic books.  8 years later, Marvel did it again, only this time, with alcohol.  Follow me as we walk down Tony Stark’s dark path as we take a look at “Demon in a Bottle”.

The issue is simple enough in its concept.  Tony Stark, the owner of Stark International, has lots of problems on his hands.  Iron Man was used by Jack Hammer to kill an ambassador, S.H.I.E.L.D. is inches away from taking his company, and Tony is scared of losing everything he’s worked so hard to attain. Two empty bottles of whiskey sit at his desk, and as Tony takes another shot, he comes to the realization that he no longer needs to be Tony Stark and that he’ll just be Iron Man from now on.  Crashing through his office window in a drunken haze, he flies off. 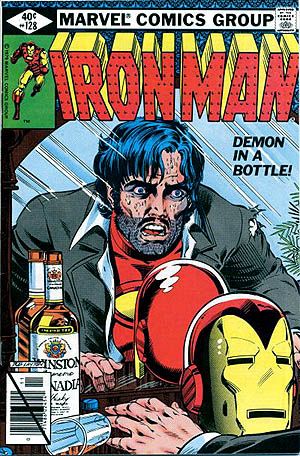 The idea, over the course of the nine issue story arc, is simple, but David Michelinie pulls no punches here. At one moment, Iron Man is trying to help at a train derailing site, only to make things much worse than they would have been if he had not gotten involved.  If he were sober, he’d have known that.  During the time when he’s getting much needed help to escape this demon, many of the stages of withdrawal are depicted here.  Anger, despair, the moments when he begs for just one more shot to take the edge off.  I personally have never read an issue where a man were so exposed in his tribulations as this, and Michelinie really makes you hurt along with Tony Stark.  You get to watch as he has to make amends for the mistakes he’s made while on alcohol, and see just how humble he can be.

Whereas John Romita Jr. laid down the pencils for this issue, Bob Layton took on the finished art, but with both working together, the images are fantastic.  You can see the despair in Tony’s face as he stares at the helmet of his Iron Man suit, held in his hands.  You can see the anxiety caused by fighting his battle with alcohol, and the anger that comes with it.  The emotions of the characters as the end of the arc unfolds, as with the writing, make you feel for the characters.  You follow Tony down his dark path to sobriety, and with these images, it’s all made very clear for the reader.  The cover alone speaks volumes about the issues contents.

Though “Demon in a Bottle” was not the name of the arc, but it became so popular with fans that Marvel drafted it as the official title of later released trades.  Elements of this storyline were briefly touched on in Iron Man 2, especially during the part of Tony’s birthday.

This quote is taken from the wikipedia article:  Writer/artist Bob Layton said of the story: “I’m gonna quote David Michelinie here, that it was never our intention to do anything relevant. We were paid to, basically, do the next episode of Iron Man. [It’s] just [that in] that particular issue, alcoholism was the bad guy. Instead of Doctor Doom or somebody like that, it was the bottle. That was our villain of the month. And that’s really the way we treated it. We built everything up to that. But the point of it is, it was never… we never attempted to be relevant. It just… in the corporate world, what gets to guys? What causes the downfall? Usually it’s greed, or it’s sex and drugs, right? Well, we couldn’t do the sex part, right? Alcohol wasn’t talked about all that much, really, to be honest with you. Especially with kids, you know, in that particular era. But, you know, we treated it as we intended to, as the bad guy.”

With that being said, this storyline helped to define the character in  a sense.  The elements touch on here have stayed with the character and a major part of his background and even parts of current story lines.  It really does bring it down to earth when reading something like this.  It tells me at least, that though these men and women are near invulnerable in the pages of the comics  I read, there is still a human element to them, and though it has to be something as drastic as this, it says that they too can succumb to the weaknesses that we also could fall victim to.  It’s very sobering to read and kind of puts things in retrospect, or as Tony said later, during Civil War, a “moment of clarity.”  You decide.

Say What?! Things From Comics You Won’t Believe Exists #82 Tony Lights Up His Life I've seen enough episodes of Mad Men to know that everyone smoked like a chimney…

A StashMyComics.com User Review: Hawkeye Blindspot #1 (of 4) This review is by stash my comics user Niko Kaylor aka AvengersFan223 at the forums. The main theme is in…