In honor of Irredeemable releasing it’s 37th and final issue I wanted to review Volume 1 of the series for this week’s Back Issue Bin. If you haven’t checked out this series before now, I strongly recommend  hunting down the issues or trades, it’s worth it. But, maybe you want to know what you’ll be getting from the series before you drop any money on it. Well listen up, here is what you will get from the first volume of this fantastic comic.

The story opens with a bang. A man in costume bursts into his house telling his family they have to get out because someone knows who they are. Within moments his wife and son are disintegrated and he soon follows them with the man who killed them claiming he is a superhero. It’s then shown that man, Plutonian, really was a hero as his sidekick recounts in flashback form before it’s discovered that Plutonian basically lobotomized him. In an effort to find something that can stop Plutonian the heroes are able to track down his old girlfriend. They learn about one of his old enemies, Modeus, but are unable to find anything useful. But, then it’s revealed that Qubit, one of the heroes has built robots that resemble Modeus. 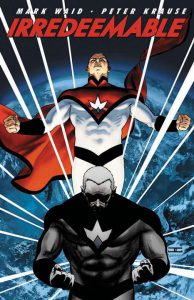 Two of the heroes, Scylla and Charybdis, are tracking some of Plutonian’s enemies. They find them in a heroes old safe house, but they also find Plutonian. Plutonian alludes to an alliance and hands them all devices implying they can hurt him with them. Before Plutonian can finish his proposal, they all push the buttons on the devices, triggering a self destruct. Everyone but Plutonian is destroyed, including Scylla. The story ends with Plutonian utterly destroying Singapore, while Qubit pleads with his Modeus-bots to find the real Modeus.

The story from Mark Waid is about a hero’s descent into evil. Waid basically challenges the idea that everyone who becomes a hero is emotionally stable enough to handle the job. If you’re looking for a superhero’s fall from grace, pick this up as Waid weaves a beautiful tale of just such a thing. One of the best aspects are the other hero’s reactions to their friend falling from grace and how they deal with it.

The art turned in by Peter Krause is nice to look at. If you’ve read any other reviews from me, you know that facial expressions are one thing I concentrate most on in comics. Aside from a few notable scenes, expressions stay consistent throughout  and don’t really differ despite what’s going on. It doesn’t really hamper the look of the book, it’s just one thing I wish had been a little different.

There aren’t many more good things I can say about Irredeemable. It is by far one of the most interesting stories I have run across in recent memory. It’s a great story of a beloved hero’s fall into being the most hated person in the world. If that’s something that sounds even remotely interesting, pick it up, you won’t be disappointed.

Art: 7/10
Script: 9/10
Parental concern: A family being murdered in the first few panels…

Advance Review: Irredeemable #37 Well, this is it, after 3 years of stories, Irredeemable comes to a close. If you have not read any…

Back Issue Bin to the Future: Identity Crisis Identity Crisis was a story that changed the DC Universe landscape. It was wrought with mystery, intrigue, and startling revelations…

Back Issue Bin to the Future: X #1 When you think of Dark Horse, what's the first thing that comes to mind?  I immediately think of Star Wars,…