The Man Called Nova! In the marvelous tradition of Spider-Man!  Fabulous First Issue!  Featuring the human rocket’s Power-Packed Origin!  Marvel’s Newest Bombshell!!  I feel like I’ve been yelled at!  OK, OK, Marvel, I’ll read it, just calm down!  You gotta love that about comic books.  Over exaggeration.  Some many exclamation points.  So much excitement.  So many butts that need to be kicked before that last panel.  All for a cover price of $0.30?  It seems so little for so much awesomeness.  Why don’t we take a look if, at the time, and even more-so now, Nova’s first issue was worth the 3 hard earned dimes of the 70’s.  Ready? Yeah!!

Richard Rider is your average Marvel Comics nobody.  He’s 17, clumsy, and a zero with the ladies.  During a High School basketball game, he fumbles a block, causing the girls to win, and the boys to look like chumps.  Needless to say, the other fellas on the team don’t care for that to much, so they take out their anger on Rich.  He gets pushed around, but as he’s licking his wounds on the ground (and later treated to Ice Cream by a girl named Ginger) something else is going on up in space.  A Centurion, with the rank of Nova-Prime, is dying.  His arms and legs having been crushed by a being named Zorr, his last action before death is to send his powers to the closest planet, which just so happens to be earth.  As the power flies through the air, Richard Rider is hit dead on at the Ice Cream shop, where he goes right into a coma.  During that time, Rich and the Centurion make telepathic contact and Rich is shown, and told, all about the dangers of Zorr, and just what Earth has in store for it.  And so starts the legacy that is Nova. 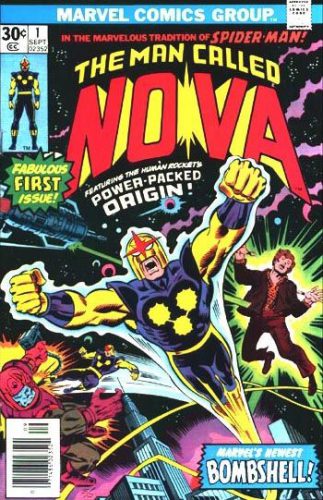 The story crafted by Marv Wolfman actually flows pretty well.  He’s divided it up into 4 chapters, which at first I thought wasn’t such a good idea, but it actually paced it out for me.  The chapters were pretty much even in pages, and it really felt like several episodes put into one issue.  With all of that though, we don’t really learn all that much about Richard, save that he’s a pushover and a nerd.  That’s about it.  I know that we learn about his as he grows with his powers, but maybe just a little more about the man behind Nova would have been more helpful.  It certainly would have made me feel for the character a little more instead of just looking at him like a background character that was in the right place at the right time.  The battle with Zorr, near the end o the issue, was great, until it ended.  It ended way to fast, and right as Nova was getting into the swing of his powers… Poof!  Zorr is gone, never to be seen again.  That as kind of lame, if you ask me.

As for the art, you can definitely tell that John Buscema and Joe Sinnott were heavily influenced by the late, great Jack Kirby.  When you look at Zorr, his design just screams Kirby, almost something out of the New Gods (from DC Comics, and one of Kirby’s greatest works), and as power shifts from one Nova to the other, you can also see the Kirby Dots, something Jack implemented into his artwork to show transfers of power or massive power build up.  The layouts are good, the people are drawn consistent and well, and the action scenes hold true.  The only thing missing was to actually have Kirby himself draw the issue.  Oh, how awesome that would have been!

I got this issue out of a dollar bin at my local comic shop.  The copy I have is a little rough around the edges, but when I saw it, I had to have it.  It was Nova!  I’ve read him in New Warriors, and certainly in Spider-Man (Nova was a main character in the first issue of Spider-Man I ever bought).   The character I read in those issues was cocky, full of himself and his powers, and very young compared to the other heroes he fought alongside.  Going back to his first issue, I see that some of that held true, but at least in the beginning, he was a total opposite of what he became later, at least personality wise.  I think I like him better now than before, especially with the Annihilation storyline.  This issue was a great way for him to start, but with it only going 25 issues, I can also see how it got lost in the shuffle of all the other titles that were on the shelves at the time.  It’s OK though, he’s become a great character in his own right, and can now hold his own with the rest of the big dogs.  I just hope he doesn’t forget who he started out as:  That clumsy nerd who just so happened to be in the right place at the right time… in an Ice Cream Shoppe.

Back Issue Bin to the Future – Marvel Zombies: Dead… For  October, it just seems right to get the month rolling with some zombies. Not just any zombies, but Marvel…