Nearly everyone who reads comics is familiar with teams like the Avengers, Justice League, X-Men, and even the Titans. All of these teams have a heavy handful of A-list heroes, with some B and C-listers filling out the roster. It can be hard, at times, to get involved with team books like these, seeing as they’ve been well established in their respective universes. New storylines start and end, sure, but overall, you just kinda feel left out. Not here. Judd Winick and Tom Raney’s Outsiders is the perfect place to start fresh and get right into the action with a new team. Yeah, Batman and Superman swing with the Justice League all day, but the likes of Nightwing and Arsenal, who were Titans in the past, cover the underbelly of the villain world. They, along with the likes of Grace, Jade (Allan Scott’s daughter), Thunder (Black Lightning’s daughter… wait… is this a theme?) Indigo, and Metamorpho round it out. Well, I’m getting way ahead of myself here. Let’s go ahead and take a look and why I think this is one of the best team books I’ve read. Let’s join up for Outsiders #1!

Here’s how it starts: It’s 2:30 in the morning in the Atlantic Ocean as the Stargazer Ocean Cruiseliner carries it’s passengers forward. Up ahead, a trio of fishing boots sit idle in the waters. No one answers the radio calls, and the captain of the Stargazer is getting frustrated. “Fine.” he says. They move around, but only enough to let those fishermen know they’re not happy. As the Stargazer goes by, a tiny little green boat begins to follow in their wake. What it houses is a boarding crew. It only takes minutes for the boarding crew to take control of the ship. Two unfortunate passengers get to greet them first, with their lives. The bridge to the Stargazer is next, along with the lives of the crew. It’s quick, easy, and over before you know it. As the crew lay bleeding and dying, others begin to board, including the leader of this boarding party. As the ship is taken over, in Gotham City, Arsenal begins to form the last part of his team. Little does he know just how involved his Outsiders will be with the Stargazer.

Judd Winick’s writing has me spellbound. His dialogue fits so perfectly and natural. Nothing feels rushed, over exaggerated, or pushed. It’s very fluid 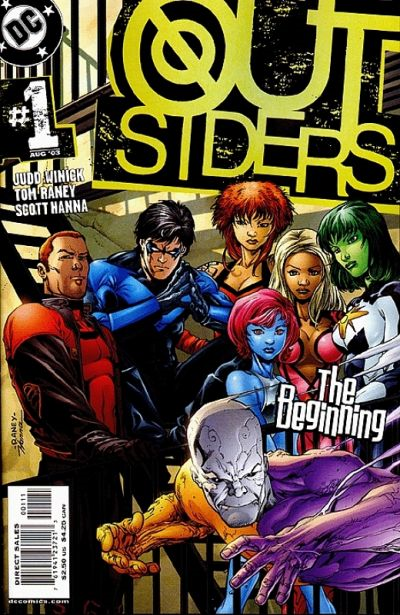 and great to read . Each character who becomes a member of the team is given equal time in the story, which doesn’t make it feel cramped or rushed. We see nearly everything from the viewpoint of Arsenal as he goes from future member to future member, helping, coaching, and convincing these folks to join his team. He brings in the likes of Grace, an Asian-American bouncer in a meta-human bar who is insanely strong. Thunder, the daughter of veteran hero Black Lightning, is brought in while she’s still relatively fresh at being a hero. Metamorpho, as we know him at this moment, lost most of his memory from an incident helping his teammates in the past. Nightwing is a harder sell, however, especially when an android named Indigo is brought in. Indigo, during the events of Graduation Day, helped kill fellow Titan members Lilith and Donna Troy. It’s easy to say that Nightwing is not happy with this. Judd Winick’s writing fits all of this together, makes it flow like a Thursday night drama, and makes it good. You can’t wait for the next issue.

I love Tom Raney’s artwork. His characters look great. What more can I say about that? Well, a lot more. The motion he applies to his scenes, the expressions given, the action that takes place, it all looks amazing. Each character looks different, and is not a cheap copy of the other. He takes the time to give each a visual personality that helps to cement the character and make them memorable. Thunder and Grace are prime examples of this. With Winick’s words, Raney helps to bring that to a visualization that sticks. Thunder has that rookie feel, a little unsure of herself, but with the legacy of her dad hanging over her. Grace, on the other hand, has no code of conduct, per se, and it shows. She’s tough, she knows it, and damn anyone that thinks otherwise. All of this is easily conveyed in Tom Raney’s work. Why he’s not right up there with the likes of the Jim Lees and Todd Mcfarlanes of the comic business is beyond me. I think he’s that good.

As I type this out, I’m currently on issue #33. I have to say that it holds true to the excitement I got from reading this first issue of the series. Why I wasn’t reading this when it came out in 2003, I don’t know, but I’m glad I got it now. I’ve got the entire 50 issue (plus one annual) run, and if the rest of the series is anything like the first 33, I’m in for one helluva ride. With this first issue, however, it really does lay the foundation for the rest of the series. We get to see just how close Nightwing and Arsenal are as friends, the relationships that bloom with Metamorpho and Indigo, and even a personal story with Metamorpho himself. You become attached to these characters, and it kinda sucks when bad things happen to them. I find myself cheering when they do get it right, though.

Hot off the heels of the Titans and Young Justice, Outsiders really did stand out on its own. Batman takes a backseat to this title, and that really helps. The major players aren’t necessary, as it’s time for this team to shine. If you want a great team story that stays pretty consistant with what it’s trying to do, Outsiders is for you. It’s no Justice League or even Justice Society, but there I think is what helps it to win. It’s the little guy, fighting the villains the others don’t really have time for. Plus, it makes you get really interested in Gorilla Grood again.

Parental Concern: None at all. There’s gorillas in it though.