Holy crap!  Did we just read that right?  I mean, is it possible, since he only uses guns and tactics while nearly everyone else in the Marvel Universe has some form of ultra cool power?  Believe it folks.  In this issue, in this universe, Punisher kills everybody.  Why? I so much want to say “Because he can!” but that’s just not true.  In reality, one simple event leads Frank Castle to hate the heroes and villains so much that he feels obligated to seek vengeance on all of them.  Shall we find out why?  Join me as we take a look at Garth Ennis’ epic One-Shot, Punisher Kills the Marvel Universe.

It starts out in Hell’s Kitchen, in the past.  Matt Murdock is being picked on and beat up by a bunch of kids.  When it seems at its worst, a young Frank Castle comes and saves Matt from more punishment.  When Frank tells him that he has to stand up for himself, Matt informs him that his father insists he ignores them.  Frank obviously disagrees.  “You gotta get your own back Matt.”  he says to him.  It’s left at that as the two go their separate  ways.  The path to destiny is set. 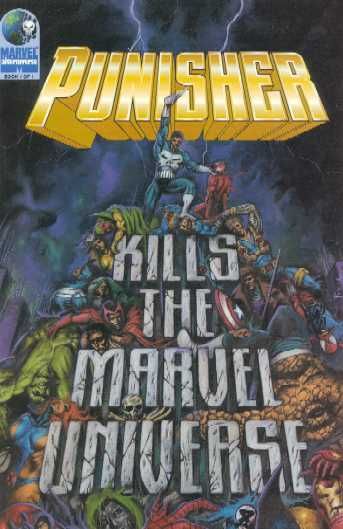 It’s many years later as we see a massive superhuman battle taking place in the middle of Central Park.  It seems a rogue group of Skrull and Brood are trying to take over the earth, and it’s up to the X-Men and Avengers to put a stop to it.  As all this takes place, the Police are informed to stay out of the area.  NYPD S.W.A.T. member Frank Castle can’t do that though.  His wife had taken their kids to Central Park earlier that day.  He has to make sure they’re alright.  When he arrives, the battle is over, but not without its casualties.  Frank Castle arrives just in time to see Daredevil chastising Cyclops and a few of the other heroes as they stand over the dead bodies of Frank’s wife and kids.  Cyclops tries to offer some form of apology, but it falls on deaf ears.  Castle’s gun comes out, and within seconds, Hawkeye, Jubilee, Cyclops, and a few others are dead.  Wolverine nearly kills Frank in return, but is restrained by Colossus.  Frank Castle is arrested and his trial is set.

That small description doesn’t even begin to touch the epicness of this issue.  Garth Ennis wrote this several years before The Boys, but during his time on Preacher.  When it was first released, it got nearly no response from fans.  I honestly can’t figure out why.  It’s a classic What If? style issue, but not branded under that title.  Once it hit the secondary market though, the cost of this issue went through the roof.  CGC copies are going for near $170 while variant covers and 2nd printings are hitting the $35 mark.  2nd printing variants though  are still going for reasonable prices, its just the lower print run covers that run so high.  Once you read this, you can see why that is.

Garth Ennis’ story is through and through, a Punisher story, but it’s also about loss.  Could the loss of your entire family drive you to do what the Punisher did?  I can’t honestly answer that, but here Ennis attempts to tackle that question.  Now granted, some of the ways he takes out the heroes or villains is rather ingenious, while others are just a little out there.  Ennis did the obvious when he had the Punisher just wait for the Hulk to revert back to Banner, and then blow his brains out there.  The way he dispatched Spider-Man (and I’m not saying this because he’s my favorite character either) was a little out there.  All in all though, it wasn’t just about blowing brains out and stalking to kill.  Yeah, that was a major part of it, but not what Garth Ennis was trying to get across.  Matt Murdock plays the voice of reason here, and it’s written very very well in that aspect.  The story speaks volumes when it comes to exactly why Frank Castle does what he does.

As for the art, I honestly would have liked to have seen something just a bit more streamlined for this.  Dougie Braithwaite’s art is unconventional at best, but it really screams amateur to me.  A little more time and care could have been put into the characters, but maybe it’s because it’s so raw and fledgling that it helps make the story what it is.  Is it supposed to be flashy and stylized?  That would definitely make it visually mind blowing, but it would take away from the pure raw energy of the story.  The art made it hard to look at, but maybe it’s supposed to be that way.  We’re not just supposed to skim this story, we need to take it all in and let it soak.  The art helps make that possible.

When I first saw this issue, it was at a friend’s house.  He had it sitting on his table, and we had a long conversation about it.  The how’s and why’s, insights into Garth Ennis taking concepts of this and putting into a much more grand scale with The Boys, and just the total coolness of such an issue actually being published by Marvel.  In all ways this is a great read and definitely one to have in a Punisher collection.   It’s not watered down.  It’s very graphic, very raw, very angry.  Just the way Punisher needs to be.

Back Issue Bin to the Future: The Punisher (Vol.1) #1 Have you ever seen one of those covers that totally grabs your attention? The cover to Amazing Spider-Man #361 immediately…

Back Issue Bin to the Future: The Boys #1 Butcher, Hughie, The Frenchman, Female, and Mother's Milk.  These five make up a team of agents called The Boys.  Their…

Comics For Noobs: December 20th The year 2012 has been a fantastic year for old comic fans and new alike. The Avengers movie hit huge…