Who is Shadowhawk?  Is he friend, foe, or worse?  Those are just some of the questions coming out of one of the launch titles from the very beginning of Image Comics. The history of Image is pretty well known.  Group of guys (pretty sweet artists and writers) get together and leave one of the best comic book companies in the world, and form their own.  One of those guys was Jim Valentino.  With launch titles like Spawn, Savage Dragon, Cyber Force, and so on, the one that fell kind of under the radar a bit was Shadowhawk.

So the plot is as follows:  Bad guys of all sorts are getting savagely beaten across New York City.  Not only do these criminals receive the smackdown of a lifetime, but they also get their spines broken.  Cops have been trailing the assailant for months, but have never come so close as a glimpse of him. 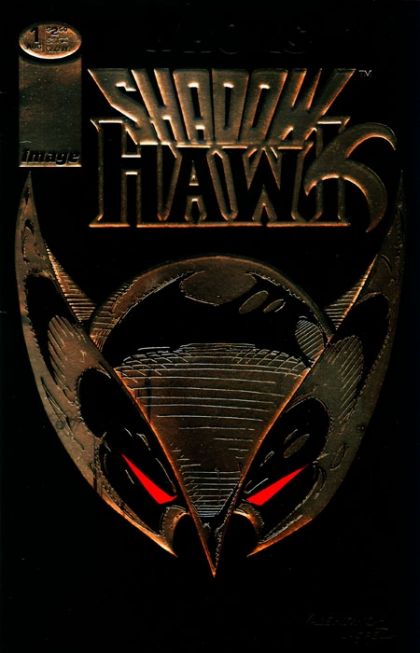 There really isn’t much more than that to tell about the plot of the book.  If this issue does anything, it really sets the framework for everything that is to follow about Shadowhawk.  We establish the fact that he fights, mainly, for good.  He’s trying to protect his small section of the city kinda like Daredevil does and he’s doing it the only way that he sees as being extremely effective.

Jim Valentino wrote and did the artwork for this issue.  Let’s start with the script first.  I thought it was good, but it most defiantly could have been alot better.  The foundation for his story was very solid, but I felt he jumped around a bit too much in the first issue.  I thought we could have focused more on Shadowhawk himself and what really motivated him to do what he does.  Instead, we bounce around alot.  It just felt a little jagged to me.  As for the artwork, I’ve always loved Valentino’s artwork.  What he draws is very smooth, with no rough edges.  It boarders on amateurish, but has enough style to hold that professionalism that we’ve become accustomed to.  He draws emotion very well and pays attention to the smaller details that make it so visually appealing.

When I was younger and Image was hot, I really followed this series.  When everyone else was worried about what was going to happen to Spawn or WildC.A.T.S. next, I was clamoring for these issues.  I really enjoyed the fact that Shadowhawk was not afraid to put some hurt on the bad guys.  Where Batman or Daredevil would beat them up an whatnot, Shadowhawk took it a step further. He busted spines!  Now, if he were to run into any of the major characters from DC or Marvel, we’d have some problems. Shadowhawk wouldn’t be viewed so much as a hero, but more like what he is trying to stop.  He’d be pursued as much as he goes after the element he’s fighting against.  I think that’s what drew me to this series in the first place.  Where all the other heroes at the time were too busy in outer space or trying to save the planet from some massive meteor shower, Shadowhawk was taking back his own section of the city, and telling criminals that it was not OK to come back!

The rest of the series really does pick up.  We learn alot more about the hero that is Shadowhawk, and we also learn who is, and what happens to, the man behind the mask.  This series, in later issues, really does tackle some controversial topics, and I think it does it very well.  It holds a sense of mystery that’s fun to follow, while the action keeps us on the edge of our seats.  If you haven’t read it yet, I defiantly recommend picking this issue up.  You won’t be disappointed.

Back Issue Bin to the Future – Spawn #1 Spawn.  When you look at that name, who, or what is the first to come to mind?  Todd McFarlane?  The…

Back Issue Bin to the Future: Spawn/Batman Team-ups can be pretty sweet. From Archie and the Punisher, all the way up to universe shattering get-togethers like Deathmate…