Spawn.  When you look at that name, who, or what is the first to come to mind?  Todd McFarlane?  The character itself?  Or, do you think about the live action movie with Micheal Jai White?  With whatever comes to mind, I think it’s safe to say that we all know who he is and it could  be argued that he is the most recognized character Image has to offer, if not one of the most recognized in the industry.  I’m not sure if that was entirely the case when issue #1 first hit shelves.  Just like with movies, books, and the like, comic creators, especially with a fledgling company, had no idea what type of reaction their new characters would get when they hit shelves for the first time.  With that, let’s take a look at Spawn #1.

The plot is as follows… Spawn has made a deal with the devil.  Only fragments of his memory remain, but with what he does know, it torments him.  The woman that haunts his mind he can’t quite grasp as to who she is.  Were they married?  Is that his wife?  Bits and pieces of a life that is not his anymore flash before his eyes.  A soldier.  A companion who turned on him.  A deal that was not fair.  All this and more we see as we go from panel to panel.  What happened to make this creature what he is?  That, readers, is the question.  During all this, we have two of New York’s finest, Sam and Twitch.  They have the pleasure of investigating the latest in a string of deaths in the Mob.  Just who is tearing the hearts out of, well, heartless criminals and tossing them out of windows?  Sam and Twitch aim to find out. 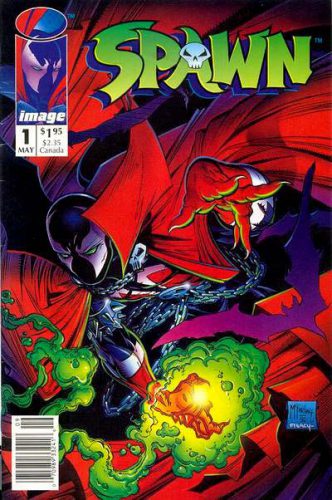 When I first picked this issue up back in 1992, I couldn’t help but salivate.  It was Todd McFarlane after all!  He was the dude from Spider-Man, so it HAD to be good, right?  Well, I can honestly say that it was.  When I first read this issue way back when, I almost felt like a kid who was peeking at a movie he wasn’t supposed to watch.  At the time, it felt very adult.  There was no comics code anywhere near this, so I had no idea what to expect.  Blood and guts?  Nudity?  Lots of cussing?  Well, in a sense, but no.

Todd McFarlane crafted a very well put together story.  It definitely was mature in the fact that it was not necessarily geared toward a twelve year old.  Instead, he wrote with the comics community, not to them.  The people that were collecting comics were growing up, so the same old stuff time and time again was not going to work.  He had to be different and innovative, and here he was.  From first page to last, it captivates you.  It reels you in to this new and fantastic world that Spawn could protect or literally destroy.  It’s amazing, it’s dark, its mysterious.

Now, with his art, this really goes without saying, but I’m going to say it anyway.  His artwork is fantastic.  Amazing.  Beyond what any mortal should be able to produce with pencil put to paper.  He just puts so much detail into his artwork.  Everything on each panel is given the proper attention to catch your eye.  The cross atop the church, the litter in the alleyway, the expressions on the faces of the characters he draws.  Like the words McFarlane writes, so does his artwork demand your attention.  To me, it can’t get much better than this.

For a first issue, this should go down in history as one of the best.  Regardless of the man who created Spawn, the character itself and the issue that brought him to the world is a masterpiece.  Though McFarlane can be long winded at times, it doesn’t seem to be a bother ot read that much.  It never seems overbearing or slow, it doesn’t drag its feet or make you want stop reading.  Instead, it pulls you in and keeps you there until the issue has had its time with you.  With all the questions that are left unanswered after that last panel, you have to know what happens next.  Yes, the series itself has it’s ups and downs, but with it’s start, it started with a bang.  I think we can still hear the rumbles of that to this day.  Can you?

Back Issue Bin to the Future: Spawn/Batman Team-ups can be pretty sweet. From Archie and the Punisher, all the way up to universe shattering get-togethers like Deathmate…