This month, Crossover Classic is all about the Mad Titan, or moreover, the epic saga that was the Infinity Gauntlet. For Back Issue Bin this week, we’ll also be focusing on Thanos‘ quest for universal domination, but on a slightly smaller scale. With this particular issue, it just so happens to be a favorite Spidey story for me. I’ve still got the same issue I bought off the newsstand as a kid, and it holds the same wonder and excitement for me now as it did then. Did Spider-Man really die? What?! Why?! How on earth did that happen?! What does Thanos have to do with it? We’ll get to that, but first,let’s swing headlong into the story that is Spider-Man #17. We will believe that a man can die!

The story is as follows: Spider-Man is swinging through New York City. His mind has the normal thoughts: Gotta pick up Mary Jane. Gotta get some BBQ sauce to Aunt May’s. Need more web fluid. Hope the rent check didn’t bounce. Typical stuff. Then, all of a sudden, his spider sense goes off and he’s off to rescue two high rise window washers (I’d never, EVER do that job. Just sayin’.) as they plummet to the street below! Spidey does this everyday. It’s second nature to him by now. Web the two falling workers. Check. Place them to safety on a connecting roof. Check. Web platform that the window washers were using.  Che.. Wait. Uh-oh. Ah crap! There’s no time! Wait a second, is that a woman and her daughter? The platform is gonna hit a cooling machine on another roof! Oh no, it’s filled with freon! It’s gonna explode! “Don’t move!” he says to the woman and her daughter. By this time though, Spidey knows it’s too late. He’s messed this one up. Big time. Someone is going to die. 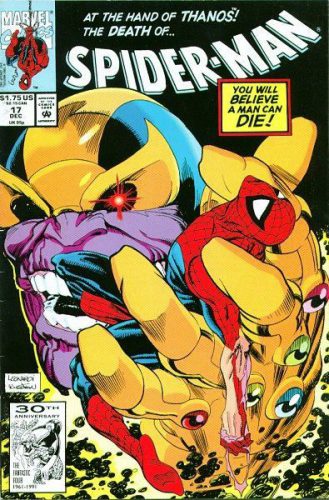 Wow! what a way to start an issue of Spider-Man! With McFarlane’s last issue being a tie-in to X-Force, and his subsequent leave to form Image, the title for which was made to showcase McFarlane’s talents was left without it’s writer and artist. Quick to move, Marvel needed a story, and fast. It’s a good thing Ann Nocenti wrote what she did. It’s not McFarlane’s work, and that I think that is what makes it work so well. It’s a break from the heavy narratives and complexity of the Todd stories. It’s simple in its concept, and ties directly in to a major event taking place at the time. Spider-Man dies, and who better for him to confront than he who loves and cherishes Death? Why, Thanos! Nocenti’s story doesn’t just deal with Spider-Man fighting his way back to the world of the living. It’s also about him as a person, and what he’s been holding onto for so long. Worry and guilt. Ann Nocenti writes as if she’s been writing Spider-Man for quite some time, and it feels like this story belongs in Amazing, rather than one of the lesser titles. Nocenti makes you pay attention, holds you, and then lets you get right back into the world that is Spidey when she’s all done. What an “amazing” ride.

Rick Leonardi‘s artwork is no McFarlane either, and there also, I think helps to make this shine. Leonardi’s pencils almost feel rushed and sketchy at first, but the more you read, the more it fits. Spidey as he swings into action is very well done. The close up shots and emotion conveyed on the characters, especially Thanos, make it memorable. His background work was a little too quick for me, but it’s the foreground we need to pay attention to here. Not much takes place in the background, and Leonardi focuses our attention on what’s in front of us. The life, and death of a hero who lives by the moment.

I love this issue. Like What If? #24, this is one I like to savor. I won’t read it often, but when I do, I like to make sure I can take my time and just enjoy it. When I first read this issue, I had just finished the epicness that was the Torment storyline. I loved that so much, that I went out and got the latest issue. I was a little disappointed that it wasn’t Todd McFarlane, because I was very anxious to see what he would come up with after Torment. As I read, I found I didn’t care so much about why Todd wasn’t there, but more about what was going to happen on the next panel. By the time I was done, this had become, at that time, my favorite issue. It’s still up there in the top ten at least, to this day.

The tagline for the comic is right. You will believe a man can die. In this issue, for all intents and purposes, Spider-Man bites the big one. Walks the Stairway to Heaven. Starts to web-sling in that proverbial New York City in the sky. It’s simple in it’s concept, but very deep in it’s story. How can Spidey defeat not only Death, but the man who controls all of reality? Well, it’s safe to say he does it, but not without looking inward to himself and seeing what he’s all about. But man, he busted the BBQ sauce, and Aunt May’s not going to be happy about that.

Back Issue Bin to the Future – Spawn #1 Spawn.  When you look at that name, who, or what is the first to come to mind?  Todd McFarlane?  The…