This book was recommended to me by comics creator Troy Hickman. While interviewing him I casually asked what bronze age book he would suggest to a guy like me. He mentioned Squadron Supreme because I was “probably more of a DC guy” and the 12 issue series has echoes of the JLA contained within it. Not long after this, fellow blog contributor Tim Morse posted a bunch of books up for trade at the StashMyComics.com forum. I pounced at the opportunity to trade with him. It was a treat to receive a package in the mail containing my new books! The first one I read was Squadron Supreme #1.  So how does this bronze age comic hold up to current standards? 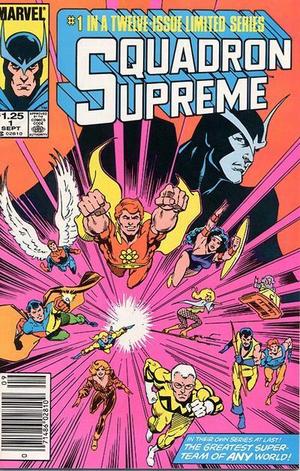 It holds up well actually. Despite the exposition-heavy dialog I found this book a fun read.

Squadron Supreme is Mark Gruenwald’s thinly veiled take on the JLA. A sort of Justice League What If? Each character is a stand in for a JLA member. Hyperion = Superman, NightHawk = Batman, Power Princess = Wonder Woman and so on. I had a fun time identifying who each character represented. Sometimes it was obvious when the characters retold their origins – to people who know them intimately, which was a bit of an awkward way to get the reader up to speed on the book’s events.

We start the story after a cataclysmic global economic and societal crash. It’s pandemonium and anarchy all over the world. And it’s the Squadron Supreme’s fault. Or so the populace thinks. You see, a terrible villain named Overmind – most likely a Darkseid equivalent – takes control of the mind of each Squadron member except for Hyperion’s, who manages to fight off Overmind’s influence. Nighthawk – his mind being compromised during his presidency – wages a war on the world, thereby undermining every nation and making the world ripe for the ruling. What now? The world is in shambles and everyone hates the Squadron. The Squadron do finally break free from Overmind’s control and Hyperion calls a meeting. Origins are tossed around along with several pages of exposition which slows the book down considerably. To the point where reading it became almost tedious. The main problem is that all of this cool stuff is just told in dialog and flashback. It’s a clunky way of narrating.

The crux of the book is finally reached when Power Princess suggests that the Squadron Supreme should perhaps use their combined power to introduce an utopia to the world, such as the one her people had once known before leaving for a new home on a different planet. Hyperion and many others agree. Things can’t get worse so it’s worth a shot. Nighthawk however has reservations. His concern is free will. Imposing an utopia on the people presents a risk for a dictatorship to take place. To Nighthawk, an utopia handed to the people on a platter has no meaning. The team part ways but the conflicting ideas come to a head by the end of the book. Nighthawk is galvanized into action. He decides to go against his cohorts to undermine their mission. the solution is to kill Hyperion, but he can;t bring himself to do it. What is plan b?

It’s a hefty first issue that gets a lot done. It establishes the characters, the world they live in, and the conflicts they must contend with. But it does so in an almost cursory, second-hand manner rendering the story dull in many places. Much of the book reads like a wikipedia entry with good art attached to it. That said, the ideas contained within are compelling. It’s an interesting concept. One that does have me wanting to read the entire series. I do want to see how it all plays out. The characterization is also well done. Each team member speaks and behaves in a distinct manner and I get the impression Gruenwald likes these characters and thus writes them with affection and compassion. All too often, bronze age stories rely on costume for character differentiation more than they do dialog and actions. That is not so in this case.

The pencils are the greater success in my opinion. I’m surprised I had never heard of Bob Hall before this. He’s quite good. His style is traditional and dynamic. The fact that he was able to inject a sense of action in a book which largely takes place in sedate settings is quite an impressive feat. Additionally, Hall has a very subtle sense of drama, often conveying complex emotions and ideas in very simple panels. See image below for an example (click the image for a larger view). 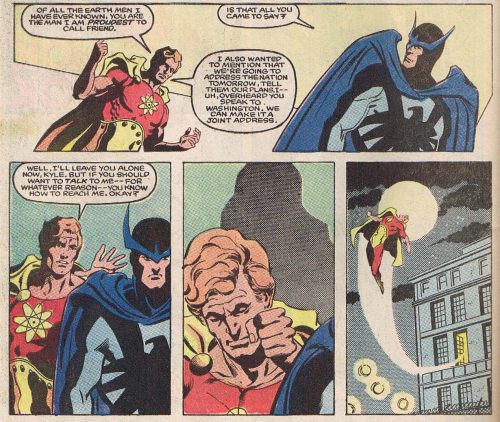 The art is certainly the determining factor in my enjoyment of the book. That’s not to say the script is bad. It’s a script filled with sharp ideas and a sincere heart. But the execution is short of excellence. I’m guessing that with all of the big business being out of the way in issue #1, the next eleven issues are likely to be relentless and intense. I’m looking forward to reading more.

Review – Infinite Vacation #3 Yes. Issue #2 of this series came out nearly half a year ago. I just happened to know about the…