I really do enjoy when secondary characters get a first class treatment.  It doesn’t happen very often, but when it does, it can either be really good, or really bad.  Case in point being Moon Knight.  He was never in the same league as Spidey or Wolverine, but he had all the potential to become an amazing character.  With the 3rd volume of his comic series amazingly well crafted and the current run taking place (which has really taken Moon Knight to new levels), I’m pretty sure that he’s well on his way to becoming a top rate character.  For a minute though, lets take a look at Erik Larsen’s Star.  He may have had three panels in the first Savage Dragon issue, but he somehow caught the attention of the fans.  According to Erik Larsen, he received hundreds of letters demanding that Star get his own series.  It’s a good thing he listened.  He took a secondary character and really let somebody who was passionate about that character attempt to give him a first star treatment.  Let’s see how well they did.

The issue starts out with a hostage situation.  A man by the name of Gauntlet  works for a crime syndicate called The Circle.  He’s holding a model and her photographer hostage due to a lack of protection payment.  Well, things don’t go according to plan as Star swings in (almost exactly like Spider-Man would) crashing through a window.  He even holds the same wise cracking humor Spidey does.  The battle is fast paced, as each panel holds a bit of the action.  Our hero eventually wins, no doubt, but not without a few high tension moments of near death.  It wouldn’t be a superhero story with those, right?  After all this takes place, we get a brief moment with the man who is Star.  He goes by the name of Peter Klaptin.  It doesn’t last very long before something else is going on in the city of Chicago, and Star must go to save the day again. 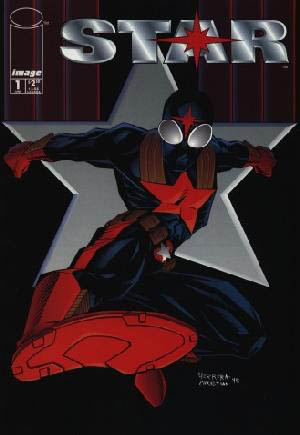 Though Erik Larsen created Star, he gave the writing abilities for this mini-series to Tom and Mary Bierbaum.  Larsen laid down the basic idea for the plot, but Tom and Mary took it to the limit.  When it comes to Star being the center of the story, they wrote that without error.  It was intense, humorous when  it called for it, and very streamlined.  I must say though, that when they wrote for Star’s altar ego Peter Klaptin, they wrote him very very one dimensional.  No emotion, not spirit, no nothing.  As Star though, he was vibrant, alive, and exciting.  Throughout the entire first issue, we never see any hint toward an origin either.  Maybe that’s for the rest of the mini-series, but I would have liked to have it hinted at at least.

Now, for the artwork.  Ben Herrera did a fantastic job.  All the characters are very animated in style, and I like that. It’s the main thing that attracts me to this story.  You can almost see the characters move from panel to panel as the action takes place, and even as that happens, the art is not short changed.  It stays very consistent and easy to absorb.  Though he draws slightly jagged, it really fits how the story should be drawn.   I think if it were done any differently, it wouldn’t be near as good.  A story like this doesn’t call for a Jim Lee or Todd McFarlane, it calls for the work of Ben Herrera.

We really haven’t seen much from Star since his mini-series debut, but for a short time, he did get that first rate treatment.  He even had an action figure made for him.  It’s an amazing mini-series for a very neglected character.  If done right, Star could have had a very successful series.  Maybe that’s still possible, but for now, all we have is his few panels in Savage Dragon #1, and this mini-series.  It’s a great, fun read put out during a time when so many characters were gracing the pages of all the publications.  Star very easily was lost in that shuffle.  Maybe Larsen will be inclined to bring him back, but until then, let Star shine, just a little, as you sit and enjoy his shot at the big time.