Not too long ago, there was this movie idea floating around having to do with the Green Arrow.  It was an idea called “Super Max”, and the concept was simply this:  Take Green Arrow, have him somehow get arrested, and put him in a prison filled with B and C list villains and see what happens.  Now, the idea never got off the ground, but its concept is what intrigued me the most. Could a movie, with a B list hero work having nothing but kind of nearly unrecognizable characters?  That idea, at least in comic form, was put to the test in one DC title:  Suicide Squad.In it, we have quite a few B and C list characters taking on a title against the odds of competing with the likes of Superman, Batman, Green Lantern, The Titans, and so on.  Was it a good idea?  Could a concept like this really take some form of shape and make it in the industry that B and C list characters get only supporting roles in?  Well, the series did end up going for 66 issues, one annual, and an issue #67 during Blackest Night, so I’d say that it at least had a fair run. Before all of that though, let’s take a look at what I thought of issue #1 of Suicide Squad. 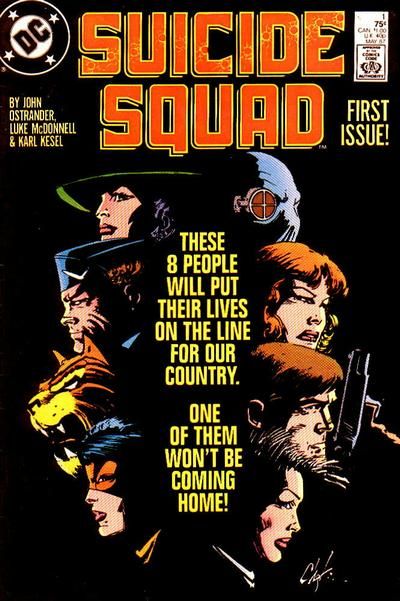 I love how this issue starts out.  Its panels move just like a movie. It starts in an airport. Air Force One is coming in for a landing. People are going from terminal to terminal, heading toward or coming from destinations. In the mix is this one simple man. Red shirt, blue jeans, carrying a device of some type and a duffel bag. A quick bit of dialogue takes place between the Mayor of Hub City and the Governor of the state as they wait for the President of the United States to land. Back to the man in the red shirt.  He speaks a simple command and then all hell breaks loose on the airport. It becomes nothing short of a massacre, but it’s not without reason. It turns out that this is a training exercise for a terrorist strike team called Jihad. Having shown what they are capable of, they are then hired for a mission inside the United States. All of this craziness takes place in the first third of the issue, and we haven’t even had mention of the Suicide Squad yet!

John Ostrander writes, for the first issue, one massive build up for nearly the entire series. It doesn’t falter though, or moreover, without an insane amount of action, it holds very well for being a foundation issue.  Ostrander wrote it with the feel of a movie in mind, and I love how he makes it flow. As the airport scene takes place, you can feel just how intense it gets, but when things slow down as we meet the team of Suicide Squad, you feel very immersed in the conversations with the team leader, and the members of the team itself.  He takes the time to point out each member and give a brief history of them too. The fan favorite Deadshot is here, plus the likes of the Bronze Tiger, Rick Flag, the Enchantress, Plastique, Mind Boggler, and my personal favorite, Captain Boomerang.  “Bruised personalities” he calls them, and that couldn’t be more fitting. It is the Suicide Squad, after all, and they’re not expected to come back from these missions. Though Ostrander doesn’t put much into some of the lesser characters, he does focus on the main ones pretty extensively, and for a series like this, those are the ones that count the most.

As for the artwork, Luke McDonnell’s pencils are as good as they can be for an 80’s comic. He doesn’t draw his characters as massive muscle bound freaks. tTey look like they would fit in with a natural human body at peak condition. Some of the characters, Jihad particularly, are drawn a little stiff, while more attention is put into some of the more colorful characters in the Suicide Squad. On the flip side of that though, quick action scenes are drawn expertly. A scene in which the leader of Jihad (the guy in the red shirt) takes out the Mayor of Hub City and the Governor, those three panels really put you into the mood of the comic.  It’s good artwork, not great, but for this title, and in later issues, it suits just fine.

It wasn’t that long ago that I got this issue to read. I sent my brother out with a couple dollars to pick me up something interesting out of the dollar bin.  He comes back home with the first 3 issues of this. This has turned into one of my favorite titles from the 80’s, not because of the art or even the story itself, but for the concept.  Like I said in the opening paragraph, it’s the concept of taking B and C list characters and putting them in a series where there is the real chance that one of them might not make it out alive. By doing that, at least one of the characters got a huge boost in his popularity. Deadshot became a staple in the title, and with the relaunch of the series, he’s right back in the mix again, this time with the likes of Harley Quinn, King Shark, and a slew of others. If you’re really enjoying the current run, then I recommend taking a look at this. See how the team got it’s start, and also get some great stories to read while you’re at it.  You won’t be disappointed.

Script:  7/10
Artwork:  6/10
Parental Concern:  Yellow to Orange for some excessive violence in the beginning.