I always liked Elsewords.  I thought that was a really neat idea.  It was, for lack of comparison, the DC Comics version of What If… .  In a sense, they did things a little differently.  Whereas Marvel asked the question of What If…, DC just kind of lumped it all together.  It was a better scope of things, if you ask me.  It never seemed as dry as Marvel, though Marvel did have some good gems in there.  Elseworlds always seemed just a little bit more put together.

Which brings me to this forgotten gem from Elseworlds.  If you ask nearly anyone who’s into comics if they remember this issue, I’m willing to bet my wife’s paycheck they’ll say something along the lines of “I have no idea what you’re talking about.”  This issue was fantastic from cover to cover, panel by panel, scene by scene.  Just sit back and imagine for a moment what it would have been like if Kal-El had crashed in Gotham City instead of Smallville.  Think about what it would have been like if the Wayne’s had discovered the pod that held Kal-El, instead of the Kent’s.  Ponder that for a moment. 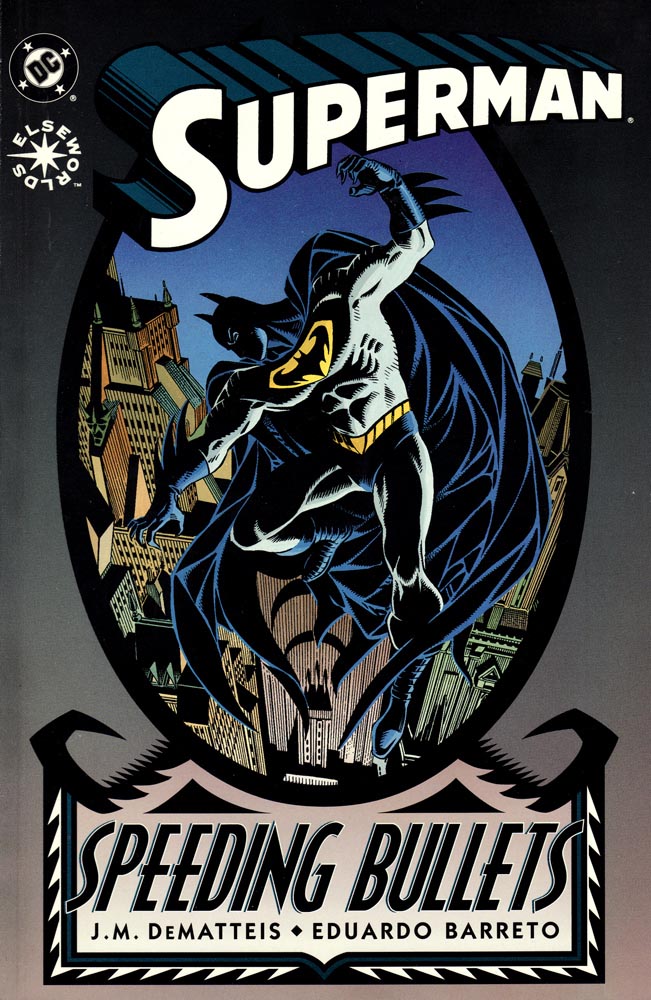 This issue starts of with the origins of Kal-El, which are nearly the same as we all know.  Krypton is nearing it’s end, and Jor-El must send his only son in the hopes of saving even the smallest part of his people.  The pod leaves the planet, headed for Earth, and we see Krypton for the last time.  All is normal in the DC Universe until the trajectory of the pod takes baby Kal-El to the outskirts of Gotham City instead of Smallville.  Here is where things change.  The small child is found by the Wayne’s (for those of you that don’t know who the Wayne’s are, they are multi-gazillionares in Gotham City.  Kind of a big deal) who take him in as their own.  No longer will they have a boy naturally by the name of Bruce, but instead adopt this orphan as their own, naming him Bruce instead.
The issue goes on in the path that Bruce ultimately has to take.  He is taught by his father how to be a man, but is taught by his mother how to care.  Everything leads up to that fateful night outside the theatre where young Bruce watches in horror as his parents are murdered in front of him.  Here, however, is where things change completely.  As Bruce watches, the powers that would have belonged to a young Clark Kent blossom into Bruce, as his heat vision comes out in a fit of rage against the murderer.  The police arrive soon thereafter, and Bruce is taken back to Wayne Manor where Alfred awaits.
It’s safe to say that the history of Batman takes over from here.  Bruce learns, and masters, the martial arts, becomes a master detective, so on and so forth.  All the while, he has also mastered the powers he has.  All the powers of Superman:  Flight, X-Ray Vision, Heat Vision, Strength, Invulnerability, all that jazz.  Now after all this, but together with the powers of Earth’s mightiest Hero and the ferocity of Earth’s most well known detective. It turns into something that really is quite amazing.
Now, as most of you know by now I’m not one to give away all of the issue, especially with this one.  It’s a great read, and I wouldn’t dare take any of the fun away from it. J.M. DeMatteis wrote an amazing script for this one-shot.  It flows very well, and covers the important parts of the origin without boring the reader with stuff we all already know. Eduardo Barreto’s pencils are quite slick too.  Nothing is too sharp but it’s also not severely rounded either.  He really brings out the emotion of young Bruce Wayne and then later as Batman.  The outfit the creative team designed was without a doubt, amazing.
With all the “What Ifs”, “how could it have been”, “and just imagine” this issue of Elseworlds really is a diamond in the rough.  I think it fell off the radar way too fast and never quite got the recognition it deserved.  I can remember offering a friend of mine a stack of comics just to get the copy he had but he’d never come off it.  He knew what it held back then. I would love for you all to see what it still holds now.

Review: Batman (Vol.2) #18 Sometimes, all it takes is a comic book to point you in the right direction. It's weird, I know, but…