The Death of Superman. At the time of its release, it was the most talked about comic in circulation, and could be argued as the most talked about in the last 20 years. News reports, word of mouth, tears from small children (that might be an exaggeration, but probably not). There wasn’t anyone who didn’t know about the final issue in which the Man of Steel would be alive*.

It was epic! Unexpected! Sales went through the roof! DC didn’t just do it as a single issue, oh no.  Tie-ins with the rest of Supes titles (Adventures, Man of Steel, and Action Comics), not to mention that years current Justice League. We, the reader weren’t left out either. A tombstone poster for us to stare at and shed a tear, a black armband to wear with pride and humility, buttons, pins, card sets… It tears me up just thinking about it (am I setting the mood?). Let’s bow our heads for a moment and remember when the Last Son of Krypton saved the world from the likes of Doomsday.  Let’s take a look at Superman #75. 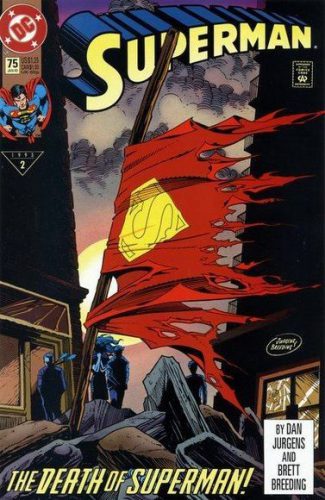 Everything has led up to this. A massive battle spanning across a good portion of the country with Superman, and a nearly beaten to death Justice League, are trying to stop the rampage of Doomsday from spreading. Closer and closer they get to Metropolis, and in vain, Superman tries to stop him. It’s no use though. The battle bleeds into the giant city that Superman calls home. With everything on the line, the Man of Steel must stop this monster now, before everything he holds dear is lost.

I see Dan Jurgens as one of the premiere Superman writers to ever grace the page. His work helped to re-define the character in the modern era of comics. As it should be, he was tasked with writing this final issue for the Man of Steel. Aside from typical ’90’s dialogue, the issue flows exceptionally well. The action scenes are penned in such a way that is almost flows in motion as you read. Jurgens writing makes you hold your breath as Superman goes punch for punch with this unstoppable machine of a creature. You can feel the sorrow and hurt that the Kent’s feel as they watch it unfold on television. You almost want to shed a tear for Jimmy, and especially Lois, as they can only stand and watch. At the time this issue came out, it needed to be this way in order for it to succeed. With Dan Jurgens writing, it worked.

With Jurgens writing, his pencils were also very equal in scope. With the help of Brent Breeding on inks, it’s stunning to see this event unfold. I have one small issue with the pencils, and I’ll get that out of the way now. Throughout most of this comic, the artwork really captures you, and holds you in for the duration, but in other parts, it just seems nearly amateurish. The spot where Superman and Doomsday are fighting in front of the Daily Planet, and the windows are shattering as they hit each other so hard. The script was beautiful, but the artwork… Not so much. Open up your second or third printing of the issue and you’ll see what I mean. Aside from that, the pencils help very much to grasp the concept that Dan was trying to get across in his words. You can see just how hard they hit each other, just how devastating  the damage is that they cause, and just how tired each of them are at the end. As the words help to convey the pain and sorrow caused by this, so too does the artwork.

I can remember when this came out, that some of my friends were truly bummed out at the fact that Superman wasn’t going to be around anymore. My own thoughts twisted around why they would do something like this. I mean, c’mon, Superman is the most recognized character in comics, and one of DC’s most popular. Why on earth would they kill of their best guy? (I know better now, but back then, I was worried!) Obviously, with Funeral for a Friend and Reign of the Supermen, we know differently, but when issue 75 hit stands, it was still uncertain. Who would take over the mantle? Was there anyone that could? What would the DC universe do without it’s champion? All would be set right in due time.

For the ’90’s, this was the most epic of all storylines. Forget that nasty Clone Saga stuff over in Spider-Man, this was where it was at. The battle that spanned over several issues, and nearly killed Guy Gardner in the process had you from part one until the end, where we saw Superman fall. It made some people cry, it made others mad, and even more scoffed and said, “nobody but Uncle Ben and Gwen Stacy stay dead in comics. Just wait!”, but for people like me, it kept us reading. I needed to know what happened next, and I can say that it was a pretty good ride until Clark came back. Which Superman did you cling to? Steel? Super(boy)man, the Cyborg Superman, or the Man of Tomorrow? It’s a fond memory for me from collecting, and just being so engrossed in that which I love so much.

Art: 8/10
Script: 9/10
Parental concern: Some blood from Superman himself, but other than that, it’s a beat down of epic proportions!

*C’mon, we all know they didn’t really kill him off. It was all for the sale of comics and publicity. They had it planned all along!

Fan Film Friday – Superman: Requiem Welcome back, ladies and gentlemen, to another SUPER edition of Fan Film Friday.  Oh, how I love the play on…

Back Issue Bin to the Future: Superman Speeding Bullets I always liked Elsewords.  I thought that was a really neat idea.  It was, for lack of comparison, the DC…