Butcher, Hughie, The Frenchman, Female, and Mother’s Milk.  These five make up a team of agents called The Boys.  Their sole purpose is to monitor, and even aggressively motivate super humans.  You can take that as the censored version of Garth Ennis and Darick Robertson’s violent and sexually frustrated comic.  Where other comics are afraid to tread, Garth Ennis takes this entire series through the mud and back, and could quite frankly care less what anyone has to say about it.  Everything from religion to homosexuality is put right into the spotlight, and usually not it any sort of good way, for us to be confronted by and directly exposed to.  With all of that though, it all had to start somewhere, and where better for it to start than DC owned Wildstorm.  Let’s take a look down the dark alley of comics as we review The Boys.

It all starts out simple enough.  Hughie and his girlfriend Robin are enjoying each other’s company at a carnival in Scotland.  It seems to be the perfect day. People are laughing, having a good time, riding rides.  It all seems so fantastic.  Robin even tells Hughie for the first time that she loves him.  Hughie smiles like he’s never smiled before as he has the kiss he’ll remember for the rest of his life.  At that very moment, what seems like a costumed villain crashes into them, taking Robin into a nearby brick wall.  Her arms are torn off, Hughie still holding them.  The hero A-Train quickly takes care of the nameless villain.  It almost seems like he doesn’t care that someone was killed. He just brushes it off and head back toward the United States, where he’s from, leaving Hughie in a tattered mess. 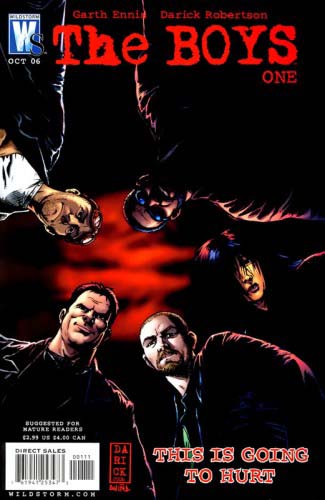 And so it begins.  The reformation of a unit of government agents named The Boys.  As the issue progresses, Garth Ennis gives us just
enough information about the Boys to fill us in.  Butcher, the leader of the team, had done this type of work in the past.  Ordered by the President, this team is there to gather information, and sometimes even eliminate both heroes and villians, as Butcher says: ”  Someone who’s ready to remind them who’s boss at a moment’s notice.”  That sentence right there really sums up the entire concept of the series.

Garth Ennis’ work here is astounding.  Aside from the gratuitous sex and violence, no real comic like this has come before it.  I really enjoyed this concept of a team sanctioned by the government to watch super humans, and to keep them in line with extreme prejudice.  He does fantastic work in setting the tone for the entire series in these few pages.  It really is quite a feat.  Though sometimes the words in his scripts can be very offensive, I think that is part of the allure of this issue.  I mean, can you honestly think of any other title that crosses the line like this one does?  Aside from other Ennis titles that is.  He doesn’t just push boundaries with his writing, he breaks them.  I’m not easily offended, but I can see how this could really make some people mad.  Aside from that though, he fleshes out his characters, and really gives them personality.  It’s great work, and I think some of his best.

Darick Robertson’s art is equally amazing.  There are no rigid edges, and everything looks very rounded.  I don’t think this would have worked if it were drawn like everything else.  The art is off the norm, and it needs to be that way for this to stick out.  It borders on cartoonish, at least to me, but it doesn’t cross that line.  All of the faces are very animated, and that also adds to the visual experiance of this issue.  I don’t like the bland looks some characters are drawn with in other titles, but here, Darick gives expression to his characters, which is a very welcome treat.

With  title like this, it was inevitable that Wildstorm wouldn’t hold it for long.  DC is a company of superheroes after all, and with this books very anti superhero/villain status, it was cancelled after issue 6.  DC was pretty cool about the whole thing though, as they let the rights go right back to Ennis and Roberston so they could find another publisher.  Dynamite picked up not long after, and it has prospered ever since.  It must also be said that the character of Hughie has an uncanny likeness to Simon Pegg.  Coincidence?  I don’t think so.  They even give a shout to Shawn of the Dead, a film Simon starred in, when the lawyers for the heroes get Hughie to sign a release from.  Look real close and you can see it on the T.V. screen in Hughies apartment.

I loved this issue, but it’s not what got me started on it.  I came in at issue 7 and followed for quite a while before finances got the better of me.  Recently though, I had to get my hands on the first six issues so I could see exactly how it all started.  I wasn’t dissapointed, and I’m glad I took the time to find them . The series is vulgar, dirty, horendis, expletive, and down right mean sometimes, but that really is what makes it so good to read.  If you can stomach it, this series will be one of the best you’ll read.  Just don’t let it get in the hands of your kids.  They may never look at superheroes the same way again.

Back Issue Bin to the Future: Punisher Kills the Marvel… Holy crap!  Did we just read that right?  I mean, is it possible, since he only uses guns and tactics…

Advance Review: Supurbia #1 Recently, SMC had the chance to talk to Grace Randolph, the creator and writer for SUPURBIA, about a lot of…