When Ultimate Spider-Man came out in 2000, I wasn’t collecting comics.  About 2004 I started getting back into comics, picking up issues of Green Lantern or Batman. Then I read that Marvel had started a separate universe full of their title characters that updated their origins and made the characters more accessible. I was extremely intrigued by this and wanted to read all about it. I was able to find a full run of Ultimate Spider-Man on eBay from issue 1 to about issue 50 and bought them. From the moment I started reading I was hooked, and I can honestly say that Ultimate Spider-Man was the reason I went full bore back into collecting comics. Recently at a local store, I was fortunate enough to find a full run of Ultimate Spider-Man TPBs from 1-17 in a discount box and snatch them up. I enjoyed reading them all over again and wanted to write a review of the first trade in the series.

The retelling of Spider-Man’s origin is pretty basic, but Brian Michael Bendis really seems to make it fresh. Not much has changed between the Spider-Man origin of old and this new one. Peter gets bitten by a radioactive spider, he lets Uncle Ben’s eventual murderer get away and he takes to crime fighting as a way to try and atone for that. But, the way it is newly written seems to rejuvenate the character. In fact, I can without a doubt say this is one of the best Spider-Man stories you could ever read. 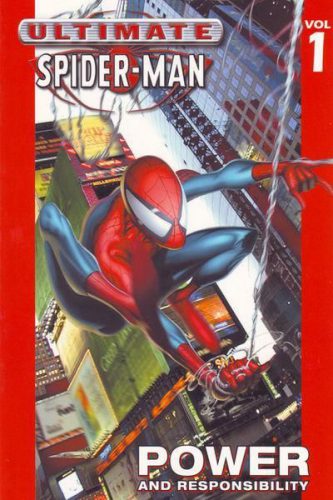 Bendis masterfully turns Norman Osborn into not only a physical adversary to Peter, but also a foil of his character. While both characters were affected by the same serum, Peter uses his abilities to help people, while Osborn uses his abilities in a strictly self-serving fashion. Presenting the characters as two sides of the same coin is a great move. This dynamic between the two characters makes for great stories and battles that are fought not only physically but mentally.

The interactions between Peter and his friends are humorous and witty and while they don’t sound like high school students the conversations are still generally enjoyable. Eventually a relationship does evolve between Peter and Mary Jane and the comic takes an even more complex turn as Peter not only has to deal with possibly losing MJ because of his dual identity but also with how his alter ego affects MJ emotionally.

Mark Bagley’s artwork in Ultimate Spider-Man is downright spectacular. Bagley has terrific range that is able to fantastically depict everything from Peter web-swinging around town, to fight scenes, to the emotions and sadness after Uncle Ben’s murder.  Even though Bagley left USM after issue 111, his work on the title was some of the best art you will ever see in a comic book.

While this individual arc is simply fantastic, the title only gets better as you read. The mythos that Bendis is able to weave is brilliant work. Considering the source material he is pulling from is 40 years old, he always makes the stories and origins feel fresh and new. If you can manage to find the individual issues for a decent price, go for it, but definitely pick up the trade, you’ll be hooked.

Spider-Man Mythos – Review Sometimes, during the course of a character's history, the origins need to be retold.  Usually it's to freshen it up…

Amalgam Comics: A look back In my last Back Issue Bin, I spoke about DC vs. Marvel. Between issues 3 and 4 of that series…