Days of Future Past is arguably one of the most popular storylines in comics, let alone in the X-titles. So popular in fact, the cover has been reproduced numerous times on other companies covers, payed homage to in action figures and statues, and even part of a major event in the ’90’s cartoon. With all of that, now it’s going to be the name of, and major plot to, the sequel to X-Men: First Class. We’ve still got a little while before that hits theaters, so why don’t we travel back in time and look over just what makes this issue so popular with the readers. Hide your mutant gene from the Sentinels, folks, we’re going underground as we sneak into Uncanny X-Men #141: Days of Future Past!

It all starts like this: It’s the year 2013, and the world is on the brink of disaster. The United States is overrun by Sentinels, giant robots with one open-ended order: Eliminate the mutant problem. This has worked rather well. People are labeled as such: H stands for Human. Normal. No mutant genes. A stands for a human that is a carrier of the mutant gene, but has no powers. M is mutant. The lowest of low. They are hunted, put in camps, or worse, killed. Some have survived. Wolverine has escaped to Canada, and now fights for the Canadian Resistance Army. Kate Pryde, Colossus, Storm, Magneto (now in a wheelchair), Franklin Richards (son of Sue and Reed of the Fantastic Four), and Rachel (who we all know as Phoenix) live in a form of concentration camp. They fight from the inside, and things are getting very close to coming to a head. A component, given to Kate by Wolverine, is being used to build a jammer of sorts. Once the jammer is active, Rachel will use her powers to send Kate back to her 1980’s counterpart (Kitty) to attempt to stop the assassination of Senator Kelly. His death ushers in events that lead up to this hellish world, and it’s the only hope of the few X-Men that are left to try and stop it before it starts.  Can they do it? 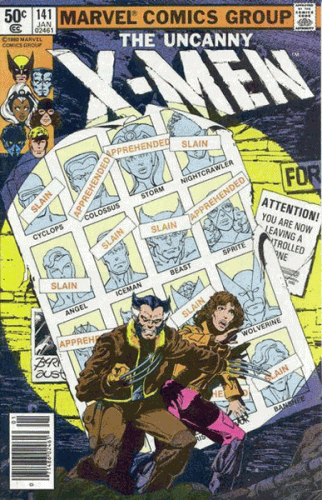 There is a reason why Chris Claremont is one of, if not the, best writers the X-Men have ever seen. His stories are so full that you can’t help but be pulled into its reality. With Days of Future Past, we get a strong taste of this terrible world that mutants, and whats left of Marvel’s heroes, live in, and the present day X-Men who are still learning to function as a team. What the entire series stands for is here. It’s all about the bigotry of a race, and what, in the most extreme case, could happen as a result of fear, ignorance, and hatred leading the way of decision makers. Claremont puts that comic twist to it, and makes it a breath-taking story, but the reality is very plain. It’s very desolate, it’s very dreadful, it’s heart breaking.  Claremont holds us tight as we go on this eye opening ride from the first to the last page.

What would an X-Men comic from the early ’80’s be without the pencils/ink team of John Bryne and Terry Austin? As lone units, they are respectable in their own rights. But together, they paint a visual that goes, I think, well beyond what some of today’s artists are capable of. John Bryne’s pencils display in such a way total devastation in New York. With this alone we’re able to get a broader picture of the state of the rest of the country too. Add to this Austin’s inks and it looks all the more compelling. The emotion brought to the characters of the story really drive home the setting of this issue and this world. Those that have survived look and feel old and tired. They live it day by day, never knowing when it could be their last. During the scenes of the future, it’s conveyed in the artwork. John Bryne and Terry Austin really take Claremont’s words and visually compel us to hold on as the Sentinels track our heroes down.

I used to have the two issue trade for this. That’s how I was exposed to this story. When I read it, and especially seeing the covers, I was hooked. The covers themselves bring forth so much of the story too. Just look at this one I’m reviewing. The spotlight, no doubt from a Sentinel, shining on Wolverine and Kate Pryde. Behind them is a wanted poster, those slain so cold-heartedly stated, while those who are still alive are marked as criminals. This cover and the next issues cover bring so much about the story to us. Sometimes that’s all you need to know that inside this issue, nothing worth cheering over can be inside.

I’m very curious to see just how this storyline can be brought to the silver screen. It’s great in concept, and we even got a small taste of it during X3 (in the beginning, during the danger room sequence), but can it be pulled off? Aren’t some of the key characters missing for this storyline to even take place? Could it be possible we’ll see some of them appear in cameos or as major characters in this sequel to First Class? I just hope they don’t screw it up. The Wolverine movie, and X3 for that matter, left a very nasty taste in our mouths. First Class was able to wash some of that out, but I have my reservations about this one. Even if the movie sucks, we’ve still got the issues!

Back Issue Bin to the Future: Uncanny X-Men #294 I want you to think back for a minute to a time when you were knee deep in comics. I'm…

Advance Review: Danger Club #1 Something is taking place just outside the reaches of earth. Every super powered human that can go, does, leaving behind…