With a series like Web of Spider-Man, sometimes it can get lost in the shuffle. With major stories taking place in the Amazing and Spectacular titles, Web’s issues could almost seem like it’s what Spider-Man would be doing on some random Tuesday when he’s not trading blows with the likes of Hobgoblin or Kraven. Where Web faltered later in the series with lackluster stories and constant switching of creative teams (Gerry Conway and Alex Saviuk stayed longer than anyone else attached to the title), unless Web stories were attached to crossovers with the other titles, they just kind of faded away.

Think for a second about a particular Web of Spider-Man issue that sticks out. I’ll wait. Anything? Didn’t think so. That’s why, when I started reading Web from start to finish, I wasn’t expecting much out of it, until I read this. I’ve made it to issue 63 of the series so far, and this one is the best. Some of the others are good, some are real stinkers, but then there’s issue 13. Let’s take a look at Web of Spider-Man #13 and find out why I think this is not only a good Web story, but one of the better Spider-Man stories you’ll read. 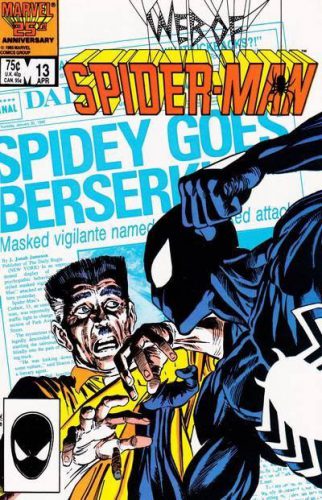 It’s all based on point of view, you see. Spider-Man is swinging along the streets of New York, when out of nowhere, a man rushes into the middle of traffic. Several people see it, others turn just in time to catch bits and pieces. Some say Spider-Man drove the man to dive into the path of the truck, while others say that Spidey was trying to save him. Either way, Spidey is able to stop the truck, or steer it along just close enough to make the guy scared to death, before swooping down to check on him. The newspaper reports that onlookers called for an ambulance and while they wait for paramedics to arrive, the crowd turns toward a black clad Web-Head. Some side with Spider-Man, saying he was only trying to do what was right, while others scream and shout that Spidey is nothing but what the Daily Bugle says he is: a menace and a threat to the good patrons of New York. It’s all about perspective.

As you read this issue, Peter David writes in such a way that you really have to look at this story from multiple angles. You see it from Peter Parker’s point of view, both as himself and his alter-ego. You see it from J. Jonah Jameson’s side, as he writes the editorial blaming Spider-Man as usual, to where he visits the hospital of the wounded man. You even get to see it from the citizens of New York and how they see and feel about Spider-Man. David’s writing is very thought out and well crafted. It’s not filled with typical banter or cheesy outward dialogue. It’s filled with solid thought and a very provocative conversation. It makes sense for a change and it’s an angle that although is an overhead in Spider-Man’s history, never really gets touched on very often, even today. We really get the chance to see how the Daily Bugle portrays Spider-Man to the masses, how Peter sees himself, and how we the reader can sometimes be blindsided by the mess of superheroes and really forget about just what they have to go through. This, in part, is why I think it’s one of the better Spidey stories you’ll ever read.

As for the artwork, Mike Harris has such a style that I haven’t seen before this issue. It’s quality is lifelike, or as lifelike as you can get in a comic without just putting up pictures. It’s not so much about how he crafts the action that takes place in the issue, because there is a fair amount of that, but it’s about expression. The way each of the people used looks makes all the difference and you can tell that much patience and effort was put into making this issue look and feel as much as the writing did. It had to work in tandem with each other to succeed, and with Mike Harris on pencils, we get to see all perspectives, all points of view in a very spectacular visual sense.

It’s a one-shot issue and it’s also one that could very easily fall on the wayside of comics. This is something, at first glance, that you’d pass by and probably never get to read. Read it. Pick it up. Spend the dollar or so on it and enjoy it. The joy about this is you don’t need to read or be a part of any of the other titles to read this issue. It stands very solidly on it’s own. Peter David and Mike Harris made sure of that.

With comics, it’s all about perspective, it’s all about point of view. We like what we like, and others may not. Every once in a while though, in an obscure title, an issue can come across and really make you look at things just a little differently. It can make you see things from an angle you haven’t seen them from before. This does it. It touches on parts of the Spider mythos that we don’t usually get to read about, and it’s done masterfully. It’s all about how you see it. It’s all about your point of view.