At one time, this was the HOTTEST book out on the market. Everyone had to have it. It was the flagship title that introduced Image Comics to the world. It was the highest selling indie comic at the time of its release. Critics HATED it! Is that still true now? Probably, and what with all the noise Rob Liefeld’s making in the comics world today (his drop of titles at DC and twitter battle with Scott Snyder), I wanted to take a look at the early days of Rob’s career. He had already made a name for himself at Marvel with New Mutants and then later with X-Force. What happened to him after that, you ask? Well, it’s this fine and dandy book right here! Did it help to set the standard for the Image universe of heroes? Was it good? Why are there no feet on the cover? Follow me as we smash our way into what is labeled as starting the ’90’s spectator boom and subsequent crash! I’m talking about Youngblood #1!

It’s a flip book with stories from the state-side Youngblood team, and the international team. The American team, lead by Shaft, gets tons of publicity and get shot at on a regular basis in the Mall. While all this is taking place, overseas the international team take on the likes of Hassan Kussein (right?) and his evil regime. That’s pretty much all you need to know here, and I’ll tell you why. 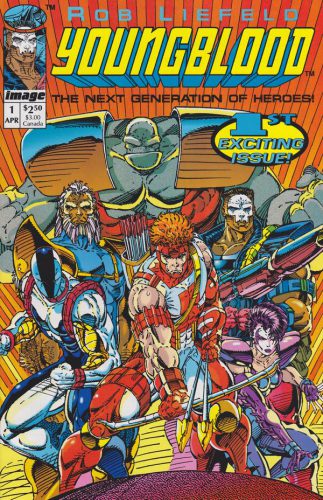 With the exception of some cool character ideas, this book sucks. A few weeks ago, I finally got to read Liefeld’s work on X-Force (you know, the issues he did before he had his tantrum and left Marvel), which were all fairly good. I enjoyed them, and having never read Youngblood when it first came out, I had the chance to see the transition like I did with the likes of McFarlane and Jim Lee. Whereas Spawn and Wild C.A.T.S. were both great respectively, Youngblood left me really disappointed. Not only does Rob Liefeld’s story hold no weight, but artwork here is even less. Let’s go with story first.

To me, it just makes no sense. Shaft gets attacked at the Mall, then he calls in the Youngbloods.  That’s it. Sentinel (who looks an awful lot like G.W. Bridge from Marvel) battles the evil forces of Hassan Kussein (ugh!) with lots of destruction. That’s it. This would have worked so much better if it weren’t a flip book double story extravaganza. It should have been one solid story giving us the reasoning behind Youngblood and why they’re so popular with the Masses, and just who everyone is. Instead, it’s all bits and pieces of cardboard copies of characters from Marvel. Am I being too harsh? Maybe, but you sit there an honestly tell me that Badrock isn’t like the Thing, or Cougar doesn’t smell of stale Wolverine cigars. How about Shaft? Can we say Hawkeye or even Green Arrow? Bingo.

Now, how about that artwork, huh? I know there are some diehard Liefeld fans, and some people that really do not like his work. I can safely say that I fall in the catagory of people that don’t like his work. His heads are too small, his eyes are very squinty, his bodies are too massively big, and his thighs look like Thanksgiving hams! Do we really need to go into the feet? We’ll take that one to the comments section.

I can honestly understand why this book was so hot back in the ’90’s. It was Rob Liefeld, the man behind the awesomeness that was X-Force. At the time, he was the hottest man with a pencil. With that being said though, when he left Marvel to help c0-found Image, Youngblood just fell way short of his work on X-Force. Maybe it was the structure and use of a good editor over there, but here, It just didn’t work.

At one time, this was the hottest comic on the planet, but with shoddy writing, and barely fair artwork, I’m surprised it did as well as it did when it came out. Today, it’s an issue from a by-gone era of the comics boom. I’m glad those days are over. Rob, where ever you are, and if you probably never read this, I’m not knocking you as person, just as an artist and writer. Regardless of it’s impact on the comics scene, it wasn’t good, and I think you know that. Maybe if you put the right creative team on some of your titles (Bloodstrike, anyone? Or even Prophet?) this could actually become a good book. Until then, well… I think we all know.

From the Ultraverse to Marvel: The rise and fall of Malibu… Back in the 90's, if we wanted to read comics, who did we get them from?  Marvel and DC immediately…