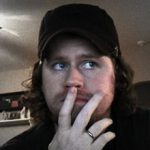 Recently, I had the honor of spending a toasty Saturday afternoon at the abode of writer and artist Eric Weathers, co-creator of Flying Fortress Comics! My mission was to experience first hand what a comic book artist goes through to bring an idea to the comic book page. There was laughter, learning, and even an occasional tear (brought on by jalapenos, I swear!). Check out this exclusive StashMyComics feature bringing you one indie creators perspective on making it in the comic book industry!

Eric was sincerely accommodating, especially considering that I pretty much invited myself over. Conversation began in-between bites of our jalapeno smothered burgers from a local Five Guys joint. Weathers is an artist/writer with big aspirations. Although working and drawing characters for Marvel or DC has been a dream of his since he was little, Weathers has come to respect and admire the smaller publisher’s (Image, IDW, BOOM!, etc.) slew of talent and projects. Like many struggling to break into the industry, he had some reservations about fully investing his efforts into making his dream a reality. Luckily Eric’s cohort on Flying Fortress Comics, Andy Moore, was there to nudge him on by setting specific goals to get his first creator owned project going. 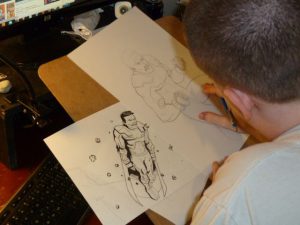 Weathers went on to describe how phase one of their plan was to have the first issue ready for an upcoming comic con. “When we decided to go for it, I quickly realized how much time and effort it was going to take.” Weathers learned this after setting aggressive goals of having a page a week done. Working into the wee hours of the morning drawing/re-drawing, coloring (not his favorite), and writing/re-writing all while balancing family life is quite the excercise. Luckily Eric’s spouse, Candice, has not only been supportive of his pursuit to become a full time comic book artist, but has even contributed as colorist for some of the issues. Eric’s wife also holds a job that takes some of the worry away that illustrators often face, inconsistent income.

Now, this doesn’t mean Eric gets to put his feet up and watch soaps all day! In fact his number one job is being a stay at home dad for his son. In-between playtime, diaper changes, and wrestling his kiddo, Eric is working hard on a comic project, the occasional commission, or improving his artistic skill. Weathers had some great advice to give when trying to better yourself as an illustrator: 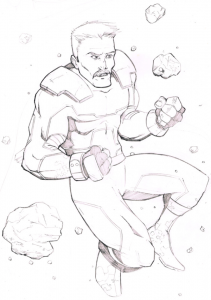 After snarfing down our burgers, and while chatting about the above, Weathers was working hard at penciling an image of a character (on the left) he had recently created as an idea for his first superhero book. I was largely impressed, not only by the skill he employed to draw the character, but by the fact he had me watching intently the entire time! I wish I could work under that kind of pressure!

To draw the character, Eric started by using his own advice from the list above. He had previously practiced drawing this character through thumbnails and early character work. He pulled out a few of those earlier sketches of the character to remain consistent in theme, and began researching possible positions to put him in. Eric told me that he has been working on bringing more “action” to his character poses to amp up the excitement in his scenes. The final result turned out pretty dang sweet! I thought he unwittingly channeled some Jack Kirby from a similar Orion pose in New Gods #1!

Eric is early in his career, and it’s exciting to hear his ambition to make it to the “big time.” So, what’s next for him? As stated above, he is currently developing a superhero project to gain experience in drawing characters in that genre. To get a job with one of the bigger comic book publishers, you have to show you can draw superheroes right? Also, following the success of collecting the first volume of Flying Fortress Comics through Kickstarter, Weathers and Moore are teaming up again to continue the tale of the airmen who are now lost in time! The second story arc will begin in issue five. Visit the series website to keep up with the latest news on the project!

If you’re interested in supporting Eric he is currently taking commission requests! Visit his blog for more information here. For other news on his future projects you can follow him on Twitter (@Eric_Weathers) or the Eric Weathers Art Facebook page. My thanks go out to Eric as well as his family for letting me borrow him for an entire afternoon on Labor Day weekend!

Chip Reece (@ChipReece on Twitter) can usually be found writing Crowd Funding Flash, out every Wednesday!

News Flash: Broken Icon Teams up with Pro Wrestler, G-Raver From the press release: One of Broken Icon’s founders and established creators, Eric Watkins, will be teaming up with a…