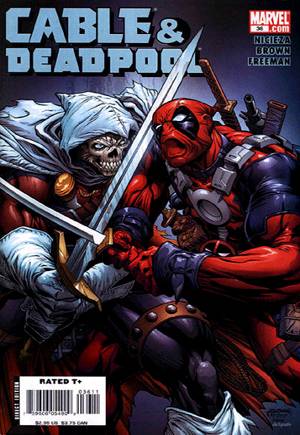 Ever since Cable put morality into Deadpool’s brain (see issue #35), he has been lacking the confidence he used to have as a mercenary, and has not been getting any jobs. Figuring people just forgot how good he is, he kidnapps all the usual people that hire him (presidents, Hydra agents, etc.), then springs the Taskmaster from a prison transport in exchange for a fight in front of his captives.

During the fight he uses everything around him against Taskmaster, beating him silly. He even lets him get close enough to stab him through the chest, but he barely slows down due to his healing factor, and continues the beating. Afterward, all the captives still do not want to work with him, because his chatty nature and unpredictable field behavior all make him a liability. He thanks Taskmaster for letting him beat on him, but Taskmaster replies that he didn’t let him, Deadpool really is that good.

Later at home watching TV, Deadpool sees that the Rhino has escaped, but authorities and other superheroes are too busy to take care of it, so he figures if he can’t get work as a mercenary, then he might as well be a superhero!

Seriously, this was one of the funniest issues of this series (let alone a comic in general) that I’ve ever read. Loved the whole fight scene, the recap page, the letters page… just everything about it was great.  I really do think it would be cool to see Deadpool take a more super-hero-y approach to his life, maybe even fulfill his dream of being an X-Man soon!

Fan Film Friday: Deadpool X-Mas Special! / Deadpool: Job… Welcome back to the Holiday edition of Fan Film Friday!!  It's only two more days until Christmas, so I hope…