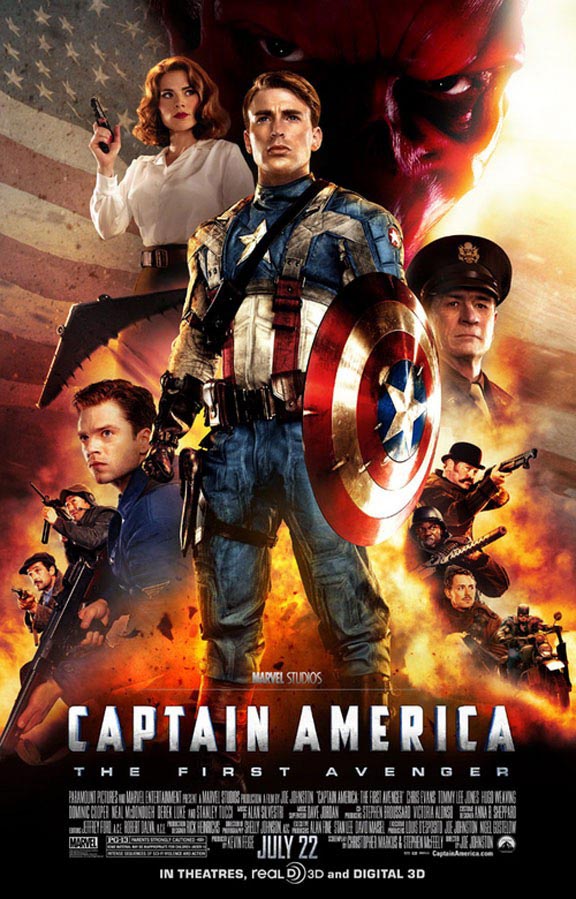 I’m Canadian (sorry). To be honest, the bulk of my knowledge about the USA is that your beer is weak but your bourbon melts my esophagus. Oh and you have a Captain and his name is America.

I admit it. I don’t know much about Captain America. I seem to remember something about a skinny kid who wants to serve in the military so badly he takes a drug that makes his muscles grow. A performance enhancer if you will (can of worms, open!) I have read practically no Captain America stories nor am I a native of his namesake. So why am I eagerly awaiting to watch a movie featuring this character? Why would any non-americans be interested in this flick?

Well, first off: Explosions. I am an unapologetic fan of movies with explosions. Call them blockbusters, summer movies, popcorn flicks, call them whatever you want. Just make sure to call me when you go, because I love that business! But other than that, I love films with substance which provide me with some sort of nugget of enlightenment. It strikes me as inevitable that artists telling stories about this particular character – Captain America – will not pass on the opportunity to make some sort of statement regarding the USA. America being the complex beast that it is, currently torn between two ideologies and under an significant amount of international pressure, must be going through a transformative experience at the moment. Art imitating life – as it is wont to do (or is the other way around?) – a film about America’s Captain must have some enlightening nuggets for a Canuck. For instance why doesn’t America’s Captain fight Al-Quaeda but instead opts to fight the Red Skull his arch-nemesis? Did the cold war leave such an indelible mark on the American psyche that they still need a hero to eradicate the red scare from their collective consciousness?  What is the Captain’s position on health care? I’m assuming America’s Captain expresses his opinion with more than with his fists. Or are the ideas and values he represents only drawn upon in times of great crises thus negating his need to be either left or right leaning? Or am I completely off my rocker in thinking the Captain reflects the country?

I think too much. At least that’s what my psychologist tells me. But this is all so very overwhelming! I’m from a country where patriotism is nearly a foreign concept. You see, our Captain does not bear his country’s name. He goes by a nickname given to its residents, by Americans! So I hope you’ll forgive me if I wax existential about the latest popcorn flick. And I hope just as much that in the midst of the explosions I will find a spark of an ineffable idea.

Color me red white and curious.
_______
Please leave a comment below with your recommendations for the best asylums and Captain America stories.

Captain America Vs. Darth Vader! Who wins? Courtesy of artist Dave Dorman. Click through for an image of the epicest battle ever! Source

Fan Film Friday: Captain America Stand at attention, soldier, as we get into another edition of Fan Film Friday!  This week, it's all about Marvel's…

Reviews – Captain America: The First Avengers Just got back from this and here are my impressions. The good: This was a superbly constructed film! It hit…