Another Wednesday has passed and a ton of comics were bought. This week holds some pretty exciting debuts and some cool new story arcs and one-shots. So, let’s see which comics are the right comics to jump into! 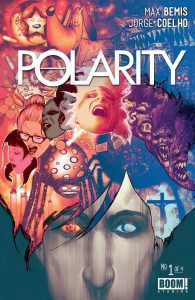 Max Bemis is the frontman for the band Say Anything. A long time comic fan, he’s now making the jump to creating comics with his new miniseries with artist Jorge Coelho. Polarity is about Tim, an artist living in Brooklyn who is surrounded by hipsters. Two years earlier he was diagnosed as bipolar after a mental episode and a near-fatal accident. Now, he’s safely medicated, in a loveless relationship, and much less productive. After a series of reminders of how lame his life has become, Tim decides to drink and go off his medication as a way to become “invincible” again. After a period of increasing insanity, Tim has an extremely strange and violent encounter that can only be a vivid delusion or entirely too real.

Max Bemis makes his debut in comics with this book and it’s a pretty strong one. The story is loosely based off Bemis’ own struggles with mental illness, so there is a certain attachment to the material that is apparent. Jorge Coelho makes the art extremely expressive, which serves the story well. His depictions of Tim’s manic episodes are particularly exciting.

New readers can get right into this story. New creators, new characters, new stories. It’s just perfect for new readers. Also, with Bemis’ success as a musician, it’s fair to say that many first time comic readers will be picking this up based on his name alone. It’s a strong debut and is something different than most comics offer. 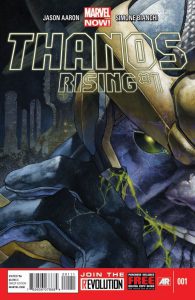 Thanos has been all the rage since his big reveal at after the credits of The Avengers. This series is a look at what shaped the child that would one day become The Mad Titan and would commit atrocities across the cosmos. It’s his origin story, of sorts, as told by Jason Aaron and Simone Bianchi.

The first few pages details Thanos’ return to Titan, to the city of his birth. He comes here regularly to remember where he came from. We then cut to many years earlier, to the birth of Thanos. While his father sees a perfect child in spite of his mutations, Thanos’ mother only sees the destruction that her son will cause and attempts to kill him. Years later, Thanos is a child of a different sort. He’s the smartest kid in school and he’s included by the others, but even so he’s ignored by his father and has to visit his mother in the asylum. It’s through the actions of a certain girl that Thanos is driven to his first act of anger and violence.

Aaron somehow makes Thanos a sympathetic character and something much less than a villain in this first issue. Bianchi’s art makes it apparent just how different the grotesque Thanos, as the other characters admit, is from the beautiful inhabitants of Titan. It’s a well-crafted and somewhat sinister origin story for one of Marvel’s biggest threats.

I actually think this could be a pretty great way to get new readers excited about Thanos. Who doesn’t love knowing what makes a character tick? It looks like it would be a great way to introduce new readers to the character, which is always a plus. 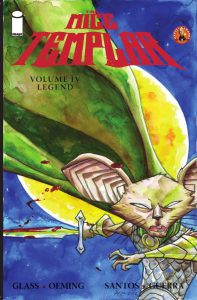 Mice Templar is the product of talented creators like Bryan J. L. Glass, Michael Avon Oeming, and Victor Santos. It’s a story steeped in it’s own mythology and legend, but also conveying the story using mice. It’s like the best Redwall book never made. After three great volumes, the group begins their fourth and final volume, Legend, which will end the journey that young Karic has been on to meet his supposed destiny.

Karic tells the story of the Battle of Avalon and how King Icarus manipulated the Mice Templar into a civil war which allowed him to take power. It’s after this story that Karic and the other mice continue their journey. Along their journey they see yet another mice village being destroyed by the rats, but are powerless to stop it as dawn is quickly approaching. The following morning the group is surveying the senseless slaughter when wolves attack. Amidst the chaos, one disbeliever in Karic sacrifices himself to further spite the supposed Chosen One.

Glass and Oeming created the story while Glass writes. The story is steeped in legend and calls back to Arthurian legend and the Middle Ages. It’s this weird mix of knights and mice that makes an oddly compelling story. Santos’ art is perfect for the dark, slightly otherworldly “Shadow Time” in which the mice live. With a story that often mixes in some supernatural, Santos’ art is always up for the task.

The first few pages are a great primer for new readers and quickly brings them up to speed on the basics of the story. The issue itself is well executed and all around fantastic. I would be willing to bet that any new reader would be around for the rest of the story. 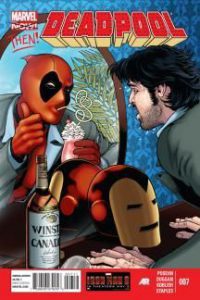 Deadpool is everyone’s favorite fourth-wall-breaking assassin. In the last arc he killed zombie presidents, and this new issue is passed off as an “inventory issue” from the late 70’s/early 80’s and is used as a fill in between arcs.

Deadpool is hired by a demon to make sure that Iron Man keeps drinking. It seems that a sober Tony Stark could complicate things and Deadpool is just the guy for the job. After acquiring some liquor, killing a few people, breaking into Stark’s office, and eventually tracking Stark down, Deadpool helps him kick his drinking habit. Deadpool then steals the armor to stop a disaster, drinking along the way, as the contract merely said that Iron Man had to keep drinking. After a good day’s work, Deadpool is pulled back to the future by his buddy Cable.

The story fell flat, in my opinion. Though the story was funny in places, as Deadpool should be, it was almost a pain to read at some points. It felt as if it was trying a bit too hard to get a laugh from the reader, rather than just letting Deadpool be Deadpool. The art was fun and helped capture the “vintage” look that the story was going for, but that was probably the best part of the book.

New readers might need to wait for the next arc to start. Deadpool has been a fun book so far, so it might be best to forget that this one happened.

Comics for Noobs: August 29th It's the last New Comic Book Day of August and, coincidentally, it's also the 96th birthday of the late Jack Kirby. So be sure…