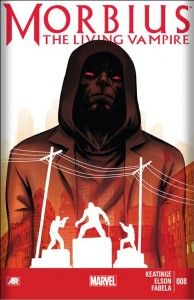 Michael Morbius was a brilliant scientist trying to cure blood diseases. Finding he had a blood disease of his own, he soon began experimenting with vampire bats. When an experiment went terribly wrong, Morbius became something that was not quite dead, but not quite alive, a living vampire.

After his recent adventure with the Superior Spider-Man, Morbius is locked in a battle for his life (unlife?) as he must do all he can to save Brownsville. Calling in favors with the residents of Monstropolis, Morbius evacuates the people of Brownsville to the monster city to make his final battle less disastrous. Morbius’ mysterious, masked foe uses a nullifier to seemingly defeat Morbius, but could this be the end of the living vampire?

Joe Keatinge makes the story one with a bit of fun. There’s a good touch of humor mixed in with the drama and action, and the humor is especially apparent with the residents of Monstropolis. The entire inclusion of a city of monsters itself is a pretty cool story feature. Richard Elson’s art is slick and gives Brownsville a great look. The design of the monsters is also done really well, but not overdone as to seem ridiculous next to the human characters.

All in all, it’s a bit much for new readers, but still is tons of fun. The recap page in the front is good to bring readers up to speed, but there are still multiple underlying things that need answers. 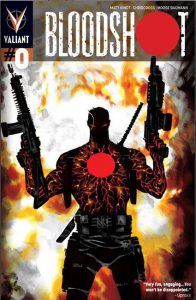 Matt Kindt takes over on Bloodshot in this zero issue as he takes a look at the origins of the seemingly immortal one-man army. Artist ChrisCross puts his mark on the character as he draws the bloody, violent beginnings of the character.

The story is told largely through the notes of a scientist tasked with giving the Bloodshot soldier something that he has lacked for so long: a conscience. Bloodshot is the best at getting the job done, and there is no job that he can’t do. He does have a nasty habit of killing women and children though. Dr. Rees details his evolution from a mindless puppet to an intelligent war machine, but he was still missing something. Finding the missing piece, Rees hopefully makes Bloodshot whole, even as he’s sacrificed for his part in history.

Kindt’s detailing of Bloodshot’s origins was interesting. It was nice to see more of his past and learn more about who and what went into making this unstoppable soldier. Cross’ art makes all the action and death in the book look great, but doesn’t make it over the top. The expressions that he’s able to convey also help to solidify the “soulless” aspect of Bloodshot early on.

This is a great way for new readers to not only get involved with the book, but to also get the full origins of the character. It’s a great issue to start on. 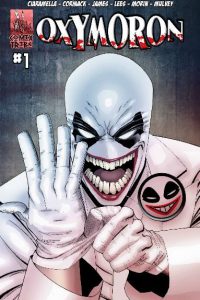 This one is fudged a bit, as all these stories were originally part of the Oxymoron anthology, but they’re now available in issues of a few stories on comiXology, so I’m counting it! Oxymoron is the contradiction obsessed supervillain akin to the Joker. With an multiple stories exploring his insanity and ruthlessness, it’s bound to get messy.

The first story, Passive Agressive, details Oxymoron’s rise to the top of the criminal underworld as he eliminates all the competition. The next story, Selfless Man, shows Oxy as he attempts to prove that there are no heroes and that people are only worried about themselves. And the final story, Nearly Perfect, brings the reader to a beauty pageant that Oxymoron has decided doesn’t quite capture the true ideal of perfection.

With three different creative teams working on the book, it would be tough to discuss all of them. That being said, each story’s writing was similar in tone and there was no drastic, distracting transition from story to story, likely thanks to the editing by Tyler James. John Lees shined on Selfless Man as he showed the decision that most would likely make, but how it can backfire horribly depending on who’s asking the questions.

The art also remained pretty consistent throughout the book, with each artist giving their own spin on the character and setting, but none being so dissimilar as to make it a a jarring experience. Alex Cormack’s art on Nearly Perfect stood out nicely for the atmosphere it created and how utterly grotesque, in a good way of course, the visuals were at points.

New readers looking for a different sort of story would do well to buy this. For just a buck on Comixology, it’s definitely a steal. 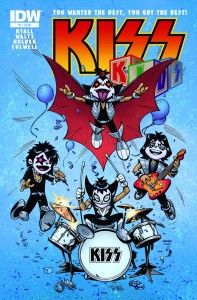 As the name suggests, Kiss Kids is about, well, the band Kiss as kids. It’s an all-ages take on the band, with some jokes and lines that longtime fans will catch.

The issue is actually comprised nine different short comics, alternately written by Chris Ryall and Tom Waltz, all with art by Jose Holder. The theme for this issue mostly seems to be about the playing during the summer and getting ready to go back to school. They attend a birthday party, get new shoes, go clothes shopping, deal with baby sitters, and more in the nine lighthearted stories.

Ryall and Waltz stay pretty consistent with the style and tone of each story, making them blend together extremely well. It’s all fun and games with the Kiss Kids and it’s a fun read. The art from Holder has a sort of “Saturday Morning Cartoon” feel to it. It’s definitely a style great for younger readers and lends well to the silly and fun adventures that the group has.

For new readers, this could be an interesting title. The book could easily be read to a child that has absolutely no idea who Kiss is, but it can also appeal to their longtime fans or just readers in general. While it would seem to have something a niche audience, there’s really a lot more flexibility for the book, thanks to how well put together it is.