Valentine’s Day is this week and there is only one gift that truly shows how much you love someone: comics! Whether it’s a story full of romance, superheroes, aliens, mutants, or any number of things, comics are always the best gift. This week, amidst all the chocolate hearts and flowers, Uncanny X-Men makes it’s return as part of Marvel NOW!, some DC crossovers come to an end, and quite a few of the independent titles put out another stellar issue. So, if this Valentine’s Day you’re looking for comics instead of love, look no further. Let’s start it off with Uncanny X-men! 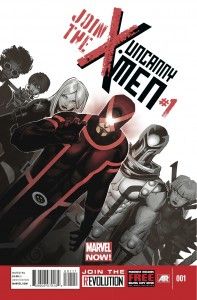 After Schism and AvX, the X-Men are very much divided. Wolverine runs his own school while Cyclops is a terrorist on the run from authorities. Cyclops has surrounded himself with members of the former “Extinction Team”: Magneto, Magic, and Emma Frost. As new mutants pop up worldwide, Cyclops has made it his personal crusade to save all these new mutants.

In this issue, a person close to Cyclops is visiting Maria Hill at S.H.I.E.L.D. Headquarters and has some information for her. He tells her that Cyclops is a broken man, both physically and spiritually. His powers are out of his control and he’s trying to atone for past sins. This isn’t enough though. This visitor wants Cyclops punished. He wants him to pay for his crimes, both those against Charles Xavier and those of a more personal nature.

Brian Michael Bendis and Chris Bachalo guide us through this story told largely through narration. They introduce a conflict that is sure to drive the title for months to come. The series comes back with a bang and shows us new sides of some familiar characters. Two men who theoretically should be aligned in their goals are rather far apart, as the last pages reveal. It should be an interesting direction for these characters.

With X-Men, the question is always, “Where do I start?”. There’s years and years of back issues and back story with these characters. For this current incarnation of Uncanny X-Men, a bit of background information would be extremely helpful. Things post-Schism would be best, but AvX and the leadup to it would suffice. It’s a great issue, just a bit too much history amongst all the characters for a completely oblivious reader to jump into. 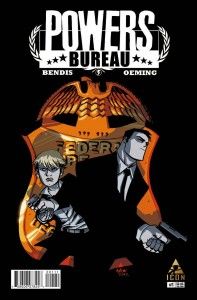 Another Brian Michael Bendis title, but in a much different vein. In this world, superpowered beings, known as Powers, are a big topic. They’re constantly involved in some sort of fight, murder, or plot to take over the world. They’ve been deemed illegal by the President in the past and now he’s made them and any crime involving them a federal matter. Many officers that dealt with Powers cases on the local level have now been made federal agents in order to deal with this. Deena Pilgrim and Enki Sunrise are now federal agents who used to be partners with the man who wrote the book on dealing with Powers. He was, and now is again, a Power himself, Christian Walker.

It seems a man is selling Power sperm on the black market and the federal agents can’t let this happen. Deena is given a new partner to stop the man selling the sperm. When they take him down, they’re both exposed to his sperm and have to be tested for the Powers Virus. In the end, the federal agents catch the man and Deena and Enki are able to find Christian, their past partner, and welcome him to the F.B.I.

Bendis teams up with Michael Avon Oeming for this issue of Powers, as he has for the last decade. They let Oeming’s art tell a lot of the story, with many pages having minimal or no narration or dialogue. Oeming’s dark, shadowy art helps this crime drama/superhero story become something more than the sum of its parts.

With over ten years worth of story behind it, I imagined it would be difficult for a new reader to jump into Powers. This issue completely destroyed that idea. This single issue uses flashbacks in such a way that it not only catches up new readers, but gives old readers something more to chew on. It is the epitome of a perfect jumping on point. It’s perfect for readers looking for a superhero story that isn’t in the traditional Batman or Superman style. 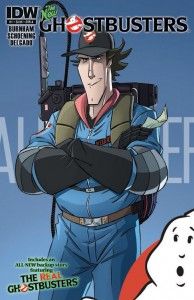 The original Ghostbusters have been captured by ghostly forces, and it’s up to a secretary, book store owner, federal agent, and convicted criminal to carry on their legacy and search for the missing men.

All the original Ghosbusters were nabbed by ghosts resembling ghastly forms of themselves. When this happens, it’s up to Janine, the guys’ secretary, Kylie, Ray’s bookstore manager, Melanie, a federal agent and Dr. Venkman’s friend, and Ron, a criminal who has a knack for technology and who has built his own ghostbusting packs. While this new team is getting their bearings, the original four guys are stuck in an alternate dimension figuring out how to escape!

Erik Burnham and Dan Schoening do art and story, respectively, for this issue. It’s a light-hearted, quirky read full of fun. I’m not a huge Ghostbusters fan, but still felt right at home with this issue. The art reminded me a bit of a cartoon, but it fit the story perfectly. I was given enough information to fill me in on the past story and was introduced to enough new information to keep the story going. It’s a fun story to jump into and it might make me watch the movies!

People new to Ghostbusters, old fans, or something in between would all feel alright with this issue. Pick it up if you’re looking for something a bit different.

Art: 9/10
Script: 8/10
Parental Concern: Minimal. The ghosts might not sit well with younger readers, but that’s about it! 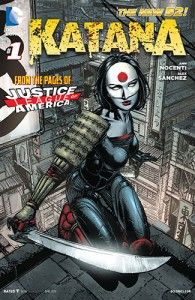 Katana is a brand new series following the titular Katana. She’s a ninja women with a grudge and is out to avenge her husband. It’s spun out of the character’s appearance in Justice League of Americaand part of the ever changing lineup of DC’s New 52.

Katana heads to Japantown in order to study, train and improve her skill with the sword. She seeks vengeance against the man that killed her husband, Coil. It’s only after a bit of training and guidance that she dons her deadly jewelry and journeys to the park. There she encounters Coil and many of his men, fighting Coil and rejecting what he has to offer her.

Ann Nocenti and Alex Sanchez helm this title, with Sanchez providing the art. The story is a bit dense to process for a reader who is unfamiliar with Katana, like myself. The story jumps between different points that span over a few days, and the jump is a bit jarring and confusing at first. Sanchez’s art makes everything okay though. It’s a very cinematic style and fits with the intense action sequences that seem to be a part of the title.

For new readers, this may not be the best. It’s a relatively new character, so there isn’t a lot of cultural relevance like  you get with Batman or Superman. Reading through the JLA issues that Katana originally appeared in might be something to do before picking up this book.

Another week and another Comics for Noobs. Some great for a new reader and some not so great. Just remember, on this Valentine’s Day, give your special someone the best gift you can, comics!