The first New Comic Day of February and things are looking great! Fantastic teams are taking over books at both Marvel and DC, Image is cranking out new series, and many title-wide crossovers at the Big 2 are starting to reach their conclusion. For new readers, that means tons of comics that are just ready to jump into! This week was special in the fact that every single book I read was either a brand new series/miniseries or a new arc of a comic I’ve never read before. I got the complete Comic Noob experience this week! Without further ado, let’s jump into the comics. First up is Green Arrow #17! 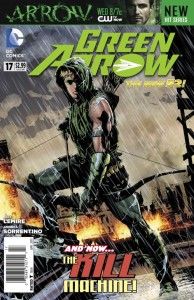 Oliver Queen is without his family fortune and with nothing to his name. New enemies are popping up and secrets about his family’s past are begging to be revealed. Jeff Lemire and Andrea Sorrentino take over this title in grand fashion. This superstar team rocks their issue of this series. Lemire mentions past content enough to tease and interest new readers, but not enough to swamp new readers with it. Sorrentino’s unique art gives Green Arrow a fresh look and a great sense of style, making the comic very visually appealing.

I’ve never been particularly interested in Green Arrow, but I’m a huge Jeff Lemire fan, so this was a must-read. I was not disappointed. Andrea Sorrentino’s art was a pleasant surprise and helped to make the issue better overall. For my first issue of Green Arrow ever, it was a positive experience. Definitely an issue that can pull in new readers, and keep them if this series is headed in the direction that many of Lemire’s works have.

New readers will feel at home with this issue and I think it’s a great issue for people to jump in with. Pick it up, read it, read it again, and then read it a third time. 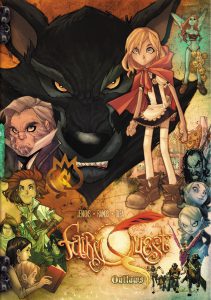 Paul Jenkins and Humberto Ramos team up to tell us a story about all your favorite bedtime stories. In Fablewood, Mister Grimm makes sure all fairy tales follow a very strict pattern. No deviations are allowed in the stories, and anything other than the approved script causes a violation and citation for all involved. Red Riding Hood and The Big Bad Wolf have become friends over the years and countless tellings of their story, which has caused many violations for all involved. Even so, it appears that there are others in much the same boat. Many characters have grown tired of their stories and they want something changed. It’s only after Cinderella is captured and punished that Red and the Wolf escape, jumping the walls of Fablewood and journeying into a wild place, Neverland!

Fairy Quest was initially something I was a bit leery of, but, man, I enjoyed it. It’s a simple, fun story with wonderful art and fun storytelling. It’s an interesting story that takes familiar concepts, things we all grew up with as children, and turns them completely on their heads. I’m very much looking forward to the rest! This issue could be great for anyone looking for something outside the normal superhero fare or something with a bit more relaxed and fun style. 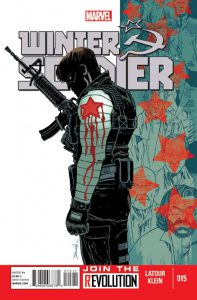 Winter Soldier is Captain America’s partner from World War II, Bucky. He was long thought dead, but was really turned into a super soldier by Soviet super science. It’s only after Cap saves him that Bucky decides to atone for all the terrible things he did while under Soviet control. In this issue, Bucky has confessed past crimes to a man who he once fought when under Soviet control. It didn’t go well and Bucky ends up in a barroom brawl with him. It’s only after the fight is over and Bucky is thinking things through, that Nick Fury appears. Fury has a mission for Bucky, one that has ties to his past.

I’d never read Winter Soldier before, but this was a treat. It’s a bit like Captain America with guns and a dark past. That is, it’s pretty great. Bucky has a chip on his shoulder and everyone knows it. The story and art give you a great feel for the character. It was a fun sort of spy-thriller comic with plenty of great action sequences. Perfect for someone trying to jump into Marvel characters that haven’t featured heavily into movies (I know Bucky was in the Captain America movie, but I stand by my point). 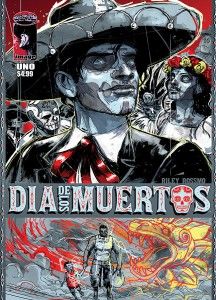 Man, Riley Rossmo is a busy guy. It seems like he always has about three projects, at least. In addition to doing Bedlam monthly he’s teamed up with nine different writers over three issues to create Dia De Los Muertos, a miniseries inspired by the Mexican “Day of the Dead”. In this issue, Rossmo did art for two stories and colors for another. The stories featured a girl who searched for her dead mother in her sleep, ghostly ancestors protecting their descendants, and a mariachi who sees a girl who just may be his dead love. It’s a weird, touching, unique collection of stories by a great mix of talent.

Rossmo is easily one of my favorite artists so picking this up was a no-brainer. His art is always so unique and interesting. Even the story not illustrated by him featured amazing art in much the same vein as his, so nothing was missed. Dirk Manning, Alex Link, and Christopher Long wrote the three stories in this issue. All three stories worked perfectly as a short story. Enough of a story to leave you wanting more. They almost felt like ghost stories, with the end left up to your imagination, which made them all the more real.

If you’re a new reader and interested in a truly unique first comic, look no further. I can guarantee almost absolutely that there is nothing anywhere close to this on the stands right now. Rossmo has brought forth something amazing, which is to be expected.

Art: 10/10
Script: 8/10
Parental Concern: Moderate. There is a lot of supernatural happenings that may not sit well with children, plus some violence.