It’s the third New Comic Day of January, and things are still going strong. Marvel NOW! is rolling right along with a couple of new titles this month, DC comics are mostly tied up in one crossover or another, and the creator-owned companies are starting up new arcs for a few of their big titles. If you’re looking to get into comics this week, you have a few options, both between entirely new series and new arcs of established series. To start this week off, let’s talk about a Marvel NOW! title, Uncanny X-Force. 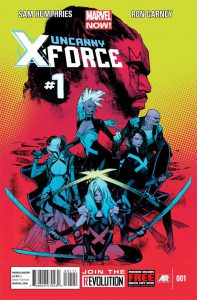 After Rick Remender‘s run on Uncanny X-Force ended Wolverine had disbanded the team and sent them on their separate way. With this new chapter in the story, Sam Humphries and Ron Garney form a new team of Puck, Psylocke, Storm, Spiral, and the female Fantomex. The new team has some problems to work through, and it seems X-Force may be the way for them to do it.

I absolutely loved Remender’s run and was excited to see Humphries take over. Humphries has done plenty of great creator-owned work, and is sure to bring a singular take to the series. His direction for the story should be a fun, weird ride for these mutants.

This first issue was eye-catching, charming, and fun to read. It gives enough background on all characters and their relationships to each other to make even a new reader feel at home, I think. I’d never read anything with Puck in it, but I felt I had a decent grasp of the character by the end of the issue. If you’re looking for the seedier side of the X-Men, look no further than Uncanny X-Force. 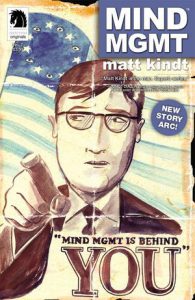 Mind MGMT by writer/artist Matt Kindt follows Meru a reporter and writer as she tries to uncover the secrets of the mysterious Flight 815, which eventually gets her involved in a war between former agents of the now defunct secret government agency Mind MGMT. Her journey led her to Henry Lyme, the former top agent of Mind MGMT, which is how the first arc ended.

Kindt writes a unique story with tons of interesting mental powers. If psychics ran the CIA, this would be Mind MGMT. It’s a series I was late to pick up on, but fell in love with the book. Kindt is striving to make Mind MGMT a book that’s worth picking up monthly, and has made sure to include special content available only in the monthly comic. His double duty on the book lends a bit of coherence to the vision for the story and, ultimately, makes the overall product better.

This issue features a page that is nothing but summary of the first six issues, which makes it easy to get into this issue. Any new readers will surely be drawn in by Kindt’s unique style and the amazing amount of extra content he crams into each and every page. All the extra content makes sure you get the most out of your money. This unique book and the new direction of the story would be great for any new reader. 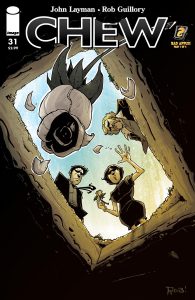 Chewis the story of a cop with the power to know all about something just from tasting it. Due to his job, he often has to resort to cannibalism, and this makes the book insane and odd. John Layman and Rob Guillory craft one of the most unique, funny, and genuinely compelling books with each issue.

Chew is consistently one of the best and weirdest books put out. It’s a strange story written by the demented mind of Layman and put to page by the quirky art of Guillory. It is easily one of the weirdest titles you could pick up, but one that’s worth the read.

Issue 31 marks the beginning of the second half of the series. While a new reader could conceivably jump on at this point, I would caution against it. It’s a new beginnings of sorts, but I would definitely advise any readers wanting to get into Chew to pick up the five previous trades before reading this issue. It’ll be worth it and will make the story much more approachable. 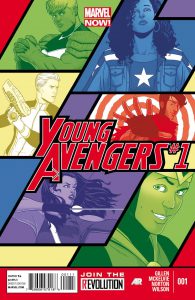 This week, I picked up Young Avengers and went into it completely blind. My only real knowledge of them is that they’re essentially young versions or equivalent versions of the Avengers. Marvel NOW! is supposed to be all about making series more approachable, so I was putting this to the test.

Like I said, I’d never read a YA book before. It was a pretty solid book all around. It’s full of teen characters, which isn’t exactly my thing, but it was done fairly well. Angst is a given, since it’s full of teens, but these powerful characters move a bit beyond typical teen fare. It’s not really a book I usually read, but it was a well-rounded issue.

While the issue was well-written and nicely drawn, I don’t think it was entirely approachable for new readers. There seemed to be a lot of back story that I was unaware of and a few mentions of other characters that I had no knowledge of. I know I’ve never read it before, but I also know my general knowledge of the characters will probably be better than a person completely new to comics.