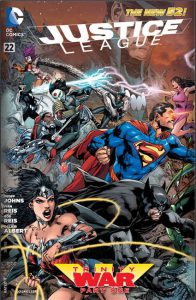 DC‘s next big crossover event is ramping up as the events of Trinity War begin to unfold. Batman, Superman, and Wonder Woman take center stage as the titular Trinity. Long teased, the event is certain to have large ramifications for many characters and the New 52 as a whole.

Madame Xanadu begins to see the future as she tells a woman her fortune, and the it’s not looking good. Back in the present, Billy Batson, a.k.a. Shazam, is taking the ashes of Black Adam to be scattered in his homeland of Kahndaq. The Trinity-led Justice League head to Kahndaq to stop Billy, hoping to stop a scene from being caused. Their government backed counterparts in the Justice League of America also head to Kahndaq, also hoping to stop a scene from happening. With that many superpowered individuals, a sinister unknown takes the meeting as a great way to do something unspeakable and ignite a huge conflict.

Ivan Reis’ art is great for the story. It fits well with the “house style”, but is a bit more dynamic. The real shortcoming of the issue is the story. It seems jumbled and has many characters acting not very much like themselves. The inclusion of Shazam warms my heart, as a huge fan of the character, and he is written rather well, but even his involvement seems a bit contrived. The story just leaves a lot to be had, which isn’t exactly the best thing when leading into an event.

New readers, save yourself the trouble. You’ll be lost. Heck, I’m lost/disappointed and I’ve halfway kept up with some of the characters involved in the story. 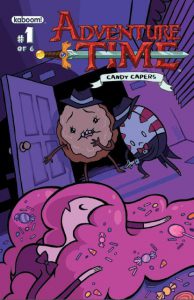 Based on the Cartoon Network show of the same name, the Adventure Time comics have received wide acclaim and delivered a couple of spin-off miniseries. The newest of these spin-offs is Candy Capers.

The writing is spot on, with the dialogue feeling much like the dialogue of the show, with its unique flow and banter. The art, too, is able to callback to the television show, but also has enough of a distinct style to not feel like the show artists did the comic. It’s an all-around well put together issue, and it’s interesting to see the spotlight taken off any of the real main characters.

New readers, gather ’round. This is a great issue for anyone familiar with the show and looking to get into some of the comic adventures that occur in Ooo. 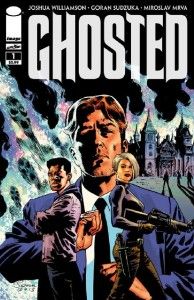 Supernatural and “heist” comics seem to be making a comeback, and Ghosted seems to be combining the two. A man assembles his own special team to steal something many don’t even believe is real: a ghost. How he plans to do it is unknown, but it’s sure to be an interesting adventure.

Jackson Winters is a man with special talents, but even those talents couldn’t keep him from going to prison. It’s while he contemplates his life behind bars and the sweet thought of knowing that he’ll die someday, that gunshots erupt and a woman comes to his cell, offering him a deal. In exchange for his freedom and all the money he could ever want, Jackson must steal a ghost. Upon journeying into the haunted mansion where the ghost is to be found, it seems things are not going to be easy.

The idea of “stealing a ghost” is immediately ridiculous sounding, but the way it’s presented in the story isn’t ridiculous at all. The world of Ghosted is definitely one in which ghosts almost certainly exist, and the idea of stealing one doesn’t seem out of the realm of possibility. Josh Williamson‘s story is a good one and when paired with Goran Sudzuka’s artwork, it comes together nicely.

As a brand new series, this is great for a new reader to jump into. And it’s something outside the realm of most comics, so it’s a good book for someone looking for something different. 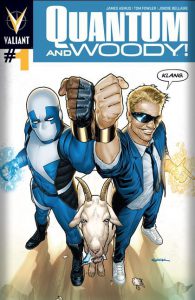 The world’s worst superhero team makes their big debut in this second Summer of Valiant. The dysfunctional brother team makes a big impression on the Valiant Universe, bringing some comedy and action in yet another stellar Valiant release.

Eric and Woody Henderson are brothers. Woody is an adopted child, but he and Eric still stuck up for each other no matter what. Several years later, when their dad dies under mysterious circumstances, the two estranged brothers must once again come together to find out what happened to their father. Because of a brotherly fight, the two end up caught in an explosion that just may leave them with some big changes.

James Asmus’ story is able to be funny, as Quantum and Woody often were in the past, but also had some genuine emotion with the story of their father and their childhoods. Tom Fowler‘s art gives a great look to the characters, really emphasizing the difference between the slacker Woody and his soldier brother Eric. The first issue is an origin story that doesn’t really feel like one, with the duo gaining their powers seeming like an organic development rather than something that had to happen.

Valiant has consistently published great books, so it’s no surprise that this book is off to a great start. Perfect for readers looking to check out a Valiant title or just get to know the characters for the first time.

Comics for Noobs: April 18th We'll jump right into it this week starting with some new arcs, series, and miniseries that hit the shelves this week.…