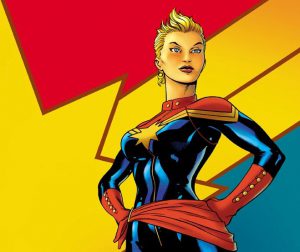 In a world of comic books, dominated by 50, 60, and 70 year old series the task of choosing one to start reading can be a daunting task. Walking in to a comic store and looking around like a lost puppy, asking the employees for help is usually the last thing people want to do. That is why you may have come here, to do your research. Every month I will run through the preceding month’s new titles, and new story arc’s in ongoing series. From independent horror and action, to classic super hero reading, I will provide you the information you’re looking for to get started in the comic fun. The stuff that will help you decide what to pick up at your local comic shop before you even get there. I also hope to provide long time readers with some perspective on that new series you heard about but never bought.

July was a great month in comics. We saw the Walking Dead #100, Before Watchmen: Ozymandias #1, and Captain Marvel #1. But it was also a great month for new mini and ongoing series. Bloodshot #1, Punk Rock Jesus #1, and Revival #1. But, just because something is an issue #1, doesn’t mean it’s going to be new reader friendly.

So here’s a look at the new series that graced our presence in the month of July: 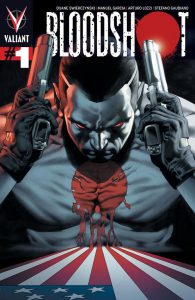 Although this, like the other Valiant relaunch titles, is a new series, it is based on the ongoing series Valiant ran in 1993. But, as a #1 should be, it is the perfect introductory issue for readers new to the Valiant universe. The artwork is top notch, and the story is well written and easy to delve in to. You are introduced to the situation at hand, an American war hero with countless amounts of nanites coursing through his body, which give him extraordinary regenerative capabilities. You are greeting him with a sense of history in the character, without the sense of dependence on old facts. By the end of the book, you will be fully invested in the character that is Bloodshot. If you’re a fan of war and action movies, this series is perfect for you.

Deciding what new comics to start reading can be hard. We usually default to classic super hero series. But think about what kind of TV shows or movies you like to watch. If you like suspense, political, and crime shows with a hint of science fiction, Punk Rock Jesus may be just your thing. I will always try to review books as spoiler free as possible, but the one thing that will either draw you in or turn you away from this comic is the main theme: cloning Jesus Christ. Many taboo subjects are brought into the light in this story. Christianity, Atheism, cloning, child abuse, and racism are all on the platter here. It is a well drawn, black and white modern day mystery type story. There is very little to no history essential to the gripping of this story. None that won’t be introduced further down the line, anyway. A great series for the not-yet-comic-savvy reader and the true hardcore comic know-it-all alike. 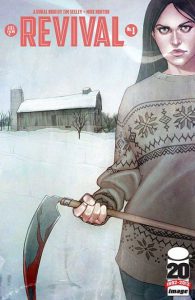 A brand new sci-fi, mystery, crime thriller, with similar colors as the X-Files, with gorgeous artwork that definitely fits the mood of the story. It dives in to the story of a small town that has been put on the map very recently by townsfolk being “revived”, oddly enough. So far it has been following the story of a young female police officer, who is looking for the approval of her father, who happens to also be on the police force. It may start out a bit slow, but it hits you with a quick jab of intense in the last 4 pages. It had me on the edge of my seat the entire time, and my jaw dropping at the last page. It very quickly became my #1 suggestion for its week, and so far, is probably my #1 suggestion for the month of July.

As I have stated before, just because a comic is an issue #1 it does not mean it is a good book for new readers. This title is one of them. Unless you have been following the recent Miss Marvel series, this one will not make much sense at all to you. It leans very heavily on back story, which is hard on new readers. But also, in a strange way, tries to start the character from scratch again, which is bad for return readers of Miss Marvel. The only thing going for this book was its artwork, which was stunning. If you buy it for anything else, it should be for that. I would like to think that carrying on in this series will be easier over time, but I’m not entirely sure. Only time will tell, and I am of the opinion that a #1 should be able to carry its own weight. If this character interests you, please buy with caution; you may feel that uncomfortable tug on your geek subconscious to go and buy 50 issues of Miss Marvel before you commit to it.

If you haven’t already been reading the “New 52” (DC’s complete relaunch of #1’s) Batman, then August’s issue #12 is a great starting off point. #11 marks the end of the current story arc, the Court of Owls. Although I’m sure it will be referred to in the future of the series, it’s safe to say now is a great time to start picking up Batman. Batman has always been a great title for all readers, because he is incredibly well known and loved. He’s a perfect character for new readers, but I never suggest a new reader to jump directly in to a story arc in progress. Especially not Batman #11. But if you love Batman, and have been looking for an appropriate starting line, #12 should be ideal. 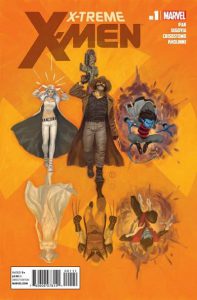 You may have been in to a fine comic book retailer lately and thought to yourself “There are just SO many X-Men books, where do I begin?” Well, Marvel just graciously added yet another title for you to consider. Lucky you. I personally was a bit leery to begin this series. I love the X-Men, but the X-Universe is so vast and so old I have yet to grasp a lot of the things that make it what it is. The fact that this book features X-Men from alternate universes, namely Wolverine, Emma Frost and Nightcrawler, AND takes place before the current events taking place in the collaborative Marvel Universe was a big red flag for me. I you have no previous knowledge of the X-Men world, please discontinue reading this review and disregard this comic as you pass it by. It is not a good place to start learning about X-Men. If you do have at least a bit of understanding of the X-characters and situation, then this comic could be an interesting dabbler for you.

You’re dropped into a catastrophic event taking place in other universes, which instantly grabs your attention. Shortly after that’s out of the way, you’re introduced to the other contributing characters from our world with ease. One of the coolest of these characters is Dazzler. I haven’t seen her in a book for a long time, and she’s really quite the character. Carrying on, nothing in this book requires you to know a whole bunch of facts. So if you like the X-Men and have been reading some X-Men titles, I don’t see any reason not to pick this series up.

The month behind us was a strong one in the world of comic bookery. The month ahead looks like a promising one, as well. August brings us the 4th relaunch title from Valiant comics: Archer and Armstrong, which was previewed in Bloodshot #1. If you picked up Bloodshot, and liked it, you should also be doing the comic-potty-dance for #2. If you can manage to get your hands on the #1’s of X-O Manowar and Harbinger #1 from Valiant comics, I highly recommend you do so. They are extremely inviting to new readers and veteran readers alike. Jump on these titles from Valiant while you still can. See you back here, next month, new comic lovers!

Comics for Noobs: August 2012 When many of us think of comic books, our mind will usually go straight to super heroes. We all know…

Comics for Noobs: September 27th September is coming to a close, and with it, this last Wednesday was the last new comic day of September.…

Comics for Noobs: November 1st What exactly is it standing between new comic readers and reading comics, people who are interested in picking up a…