Another New Comic Book Day is here! With that comes plenty of new stories and characters. Some fan favorite icons start new series and arcs today, while other characters see comics for the very first time. So, sit back, relax, and maybe grab a couple of comics and check out this week’s Comics for Noobs! 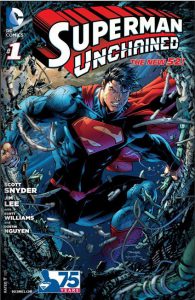 Superman is the icon of icon when it comes to comics. Generations of comic creators have looked to Superman for inspiration. With a creative team like Scott Snyder and Jim Lee a lot is obviously to be expected of this title. How did it stack up?

Thirteen satellites fall from the sky almost simultaneously. The logical suspect is Lex Luthor, even if he is still in prison. Even with this mystery, there is a deeper mystery. Superman didn’t stop one of the satellites, so who did? Who has power equal to, or greater than, the Man of Steel and how has Superman never heard of him before? It seems that there is a decades old secrets that even Superman can’t see.

Scott Snyder. Jim Lee. That’s really all that needs to be said. Scott is living the dream by writing both Batman and Superman stories, and Jim is a comic legend. The story introduces a threat that has never been seen before in a Superman story, but promises to be a formidable opponent. Snyder’s story is great. Great pace, good dialogue, and you get a good feel for both Superman and Clark Kent. Lee’s art is, of course, fantastic. The only real complaint is the four page spread/fold out poster, which was just a bit much. It was too large and unwieldy to be effective.

Even with the odd spread, it’s a fantastic book. Everyone knows Superman, so there is no excuse to not pick up the book. Jump on it, people. 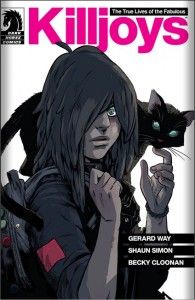 Gerard Way once again comes to comics with True Lives of the Fabulous Killjoys to tell a story that ties in to the My Chemical Romance album of the same name. Set years after the story of the album, all the Killjoys are dead and the child known as Girl is left in the desert to fight against Better Living Industries.

The issue opens with Girl looking to find food for the day, only to give it up in return for a mask of one of the dead Killjoys. After she’s led away by the group of rebels known as the Ultra V’s, Girl is caught in an encounter with BLI’s enforcers, the Draculoids. With a member of the Ultra V’s dead as a result of the fight, they head back to the Nest, the base of the Ultra V’s to mourn and party. It’s only after they arrive that they realize BLI has finally found their hideout and is coming to wipe them out for good.

Way partnered with Shaun Simon to cowrite the story, while Becky Cloonan provided the art. The story is somewhat muddled. Some characters are introduced that seem to really not serve much of a purpose, but it surely ties into the album’s overall story in some way. Cloonan’s art is, as always, fantastic, helping to provide a lift to the somewhat muddled story.

There are certain to be quite a few new comic readers picking up this book based on being fans of Way’s music, so that’s good. Assuming it ties in to the album it shares a name with, this story will likely make more sense to them. To me, it’s a bit muddled. 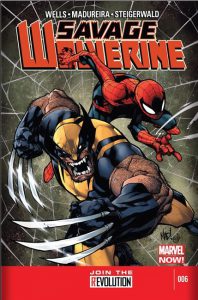 Though it seems like Wolverine is already in every Marvel book published, there is always room for more, if done right. Savage Wolverine seems like a way for him to go on adventures that don’t fit nicely into an Avengers or X-Men book, but still allows him to team up with the various villains and heroes that he has a relationship with.

After almost killing an enemy when he burns his face off, Wolverine goes back to Avengers Tower to relax. It’s there that Spider-Man wants to talk to Wolverine about what happened, plus maybe play with his sweet swords. It’s only when Elektra shows up that things start to get serious. Wolverine agrees to help her, thinking of her as something of a kindred spirit as they’re both cold-blooded killers. Though it seems that Elektra is going to help the villain Kingpin, it seems that Wolverine has even worse things to worry about.

Zeb Wells and Joe Madureira partner up to bring the readers this Wolverine story. The duo often collaborates and it’s usually a good thing. This issue is no exception. Wells captures both the light hearted pre-OckSpidey Spider-Man and the bit of self-hatred but also realism that Wolverine possesses. The art from Madureira is extremely expressive and great for a story with both Wolverine and Spider-Man.

New readers can get into this. Even with Elektra, who may be unknown to some new readers, there’s enough background to go with the story. At just a couple of issues, it’s not much of a commitment, but is sure to be a good read. 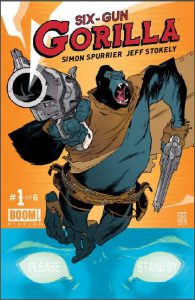 Drawing inspiration from old pulp serials featuring a character of the same name Six Gun Gorilla takes the reader to Blister, a far away world where a war is being waged. Inhabitants of Earth view the war on Blister through soldiers with “psychic tumors”. These special soldiers are all suicidal people who are transmitting back to Earth in exchange for payment and a worthy death.

After landing on Blister, all the psychic tumor soldiers are formed up and lead to the slaughter. One such soldier is a former librarian, jobless, divorced, and utterly without hope. He was obsessed with an old story from creators unknown, one that ultimately seems to have cost him his marriage. On Blister, he finds something that shouldn’t be and things that shouldn’t even be on Blister.

Simon Spurrier writes this story while Jeff Stokely does all the art. While inspired by the old serials, this version of Six Gun Gorilla takes place not in the Old West, but on a far away sci-fi planet. Spurrier puts a lot of story into this issue and gives a lot of concepts that need explaining, but seems to balance it well. Stokely’s art is fantastic, giving both a great look to the titular ape, but also the landscape of the planet of Blister. It’s an interesting mix of classic sci-fi world building and strange new characters and situations.

At first, I wasn’t too keen on the story, but after a reread, I loved it. It’s full of some great sci-fi moments, but also has some nice nods to the original material. The world of Blister and the state of Earth are both things that a sci-fi fan can get caught up in and enjoy. Perfect for fans of the genre.

Comics for Noobs: March 14th It's arguably one of the best times for someone to read comics. In the last year, numerous creator-owned hits have…