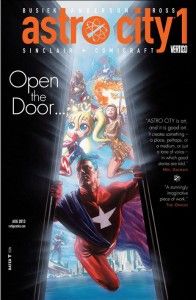 Astro City returns with a brand-new ongoing series. Even though it’s the sixtieth actual issue, it’s billed as a new start and a way for new readers to jump into this universe.

Kurt Busiek and Brent Eric Anderson treat the reader to a story that picks up years after the last Astro City tale. Ben Pullam has raised two successful daughters, does his work well, and makes more money than he needs. The problem is that he just needs something else to do. He’s looking for the next big adventure, and he just may find it when a large, powerful visitor comes out of a door that suddenly appeared over the river. The visitor needs a normal person to tell him of the culture of Earth, and Ben has volunteered.

The art and story of this issue immediately remind old readers why Astro City was something special. And it’s sure to win over more than a few new readers. It’s a superhero story that isn’t just about people being super, but more about the city that they protect. It’s about the little people and the grand things they’re a part of. The added touch of the comic universe moving at the same pace as our own is just an extra little detail that makes the overall story that much better.

Everyone needs to read this issue, both those new to the series and past fans. It’s a wonderful start to another chapter in Astro City lore and comic fans need to take note of it. 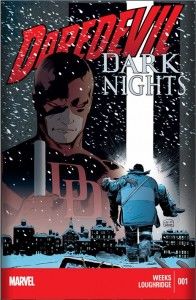 Daredevil is the man without fear. But when he’s not beating up bad guys, he’s a blind lawyer helping those who really need it. And before all that, he was a poor kid who was caught in an accident and ended up with a dead dad and deserted mom. And through it all, he fought. That’s what this miniseries seems to be about. Daredevil fighting, even when he has every right to just lay down.

In the midst of a blizzard, a little girl needs a heart. Matt Murdock is at the same hospital, beaten and bruised and with flaky powers. But, he steps up to do what needs to be done. The helicopter transporting the girl’s new organ crashes, leaving her in dire straits and just hours to live. Even with less than reliable powers, Matt dons his mask and suit and goes out into the storm to find that helicopter and help that girl. Even after being beaten and falling all day, he knows what he has to do.

Lee Weeks both writes and illustrates this adventure that defines the character of Daredevil. He’s truly someone who should have no right beating up muggers, but has fought his entire life to get to where he is. The recap of sorts in the beginning gives a great sense of Matt and who he is. The art is reminiscent of older Daredevil adventures which helps give it a sort of classic feel.

This is a great story for both current fans and readers looking to read more about Matt and his superhero identity. It gives a good feel for the character and has him acting in a way that feels genuine and pure. 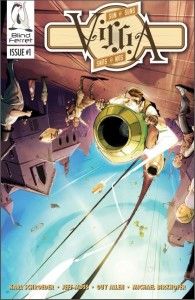 Virga: Sun of Suns was originally a sci-fi novel by Karl Schroeder, but after Ryan Sohmer, Editor-in-Chief at Blind Ferret read the book, he knew it had to be made into a comic. Virga is a fullerene balloon 3000 kilometers in diameter filled with gas, water, and floating bits of rock. The humans in this world must create artificial “suns” in order to heat and light the towns they make either on or tethered to the largest bits of rock. After Slipstream, one of the largest and most powerful floating nations, conquers Aerie and kills a young Hayden Griffin’s parents, he’s bent on revenge, but in an everchanging world, that might be hard to come by.

Hayden is working when his mother is set to fire up the new sun that she’s been working on. Slipstream destroys the sun in a surprise invasion and leaves Aerie as nothing more than a vassal to the larger nation and Hayden’s parents dead. Years later, Hayden is a valet to a powerful woman with Slipstream’s government. He’s slowly been working his way up to a position where he can finally have his revenge.

Though I’m unfamiliar with the source material, Jeff Moss’ adaptation is a great sci-fi comic in its own right. The art by Guy Allen is so strong and gives the world of Virga a great look. The people flying through the sky on steampunk jetpacks look right at home in the lushly illustrated world. For an indie comic and a book adaptation, this is done with real finesse and great quality.

This is a great comic to jump into. Fans of the book will like it, fans of sci-fi will like, and just readers in general will probably like it. It’s a solid story, and it’s just 99 cents on Comixology. 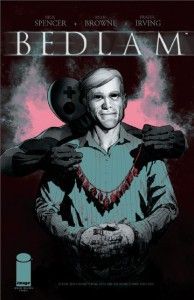 Madder Red was once the most notorious and violent criminal the city had seen. Now, he’s ostensibly dead and the man known as Fillmore is left as a crazy mess to deal with his life. Fillmore has begun to help the police catch serial killers with his special insight into their minds.

The city council is meeting to discuss giving funding to a special task force that will deal with criminals and crimes that the regular police just aren’t capable of handling. After it’s shot down, Detective Acevedo, the woman who would lead the task force, meets with her special consultant, Fillmore, to discuss a murder and the possibility of a job. It’s while this meeting occurs that a strange a destructive crime takes place all around the city.

Ryan Browne makes his first appearance as artist on Bedlam, but still maintains the style and intensity, while putting his own mark on things. Nick Spencer continues to weave a weird and mysterious tale of murder, blood and insanity that never ceases to amaze. The prospect of Fillmore possibly having an official capacity in murder investigations is an interesting one and is sure to cause some conflicts.

Comics for Noobs: February 21st Big news came out yesterday with all-new teams on the Green Lantern books, but while we wait for those, let's…